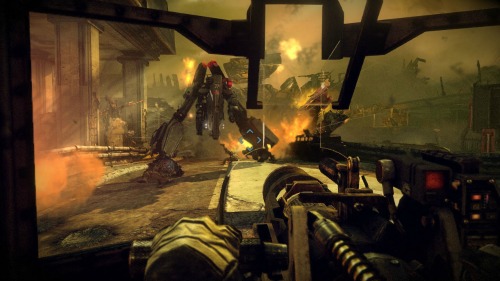 For the second entry in this series that examines video game genre accessibility, we will look at the shooter genre.

Like many gamers who started out back in the ‘90s, one of my earliest gaming memories was playing Golden Eye on the N64. Since then, shooters have received a vast upgrade in their quality, but the fundamental controls and mechanics have not changed. It is these basic elements that have made the genre one of the most accessible and enjoyable. However, the shooter genre is by no means perfect, even though it does some things right when it comes to accessibility.

The single most important aspect that makes the shooter genre accessible is that the control scheme is usually very simple. The player only needs to know how to accomplish two actions to function in a shooter: move and shoot. There are other actions, such as switching weapons and throwing grenades, but these are not necessarily needed to progress in a game. Combine this with the fact that many shooters either have a number of preset controller layouts that the player can switch between, or a completely customizable controller layout, and you have a genre that is able to flex to the needs of many disabled players.

One problem arises in the controller when both sticks are required to move the player and aim. For example, in the Call of Duty franchise there is usually a layout, called “legacy”, which puts all forward and backward movement as well as left and right turns on the same joystick. This allows a disabled gamer to have one hand dedicated to movement while the other is always on the trigger. Unfortunately, some games, such as Killzone 3, do not have this kind of layout. As a result, a disabled player has to get used to using both thumbs in tandem to aim effectively. For someone with fine-motor challenges this makes the game more difficult to play, since it can be hard to tell both thumbs to do different things at the same time. This problem can sometimes be overcome with a bit of practice.

The other major problem arises in competitive multiplayer segments of shooters. This problem stems from the twitch-based nature of the gameplay. In most multiplayer matches, things can unfold so quickly that it can be hard for someone with slow reflexes to adapt. However, in my own experience, I have found a one word answer to this problem: shotguns! Yes, an enemy that tries rushing you usually can’t adapt to a load of buckshot in the face. In all seriousness, though, this scenario does highlight one of the ways of adapting to the fast-paced nature of a game like CoD. The ability to customize your weapon load-out and pick up new weapons gives players with fine motor challenges a fighting chance, because they can choose a set of tools that best fits their play style. In many cases, players with fine-motor challenges have a hard time pulling the trigger multiple times in quick succession, and so they need a gun that will get the job done in one or two shots.

Another reason that shooters are accessible is that in quite a few multiplayer experiences there is a class-based system. For instance, one of the most popular examples of this type of game is Team Fortress 2. The ability to switch between classes means that if there is one area that a disabled player struggles in, they can try a different class that has a completely different function.

All of these aspects are similar across all of the sub-genres of the shooter category, be it first person, third person, or shooter RPG. However, shooter RPGs have another set of features that make them accessible. In many games, such as the Mass Effect series, the player has not only the ability to customize their weapons to fit their play style, but also to stop action to select targets to fire upon. This type of aim-assist makes it easy for someone with fine motor limitations to enjoy shooter RPGs.

However players with sight and hearing disabilities might have more of a problem, since most shooters require the ability to react to changing situations instantly. For example, many shooter multiplayer experiences are rendered inaccessible to colorblind players because the teams are only differentiated by the color that their name appears in. For example, in Call of Duty, the player’s teammates will always appear with green names, while their opponents will always appear with blue names. Similarly, players with sight disabilities might have trouble perceiving the small flashes of light that indicate which direction they are being shot from, in single-player as well as in multiplayer formats.

Along the same lines, players with hearing disabilities will be at a disadvantage when playing shooters because it helps to be able to distinguish the sounds around you, whether it be an opponent reloading or a teammate calling out for a medic. And since virtually none of these features have subtitles, this barrier is very hard to overcome.

Taken as a genre, shooters are very accessible for those with fine motor disabilities, but pose some serious problems for those with vision or auditory issues. Creative strategizing is all that is needed for players with limited reflexes. But if a player is not able to catch the nuances of sound and sight that detail certain aspects within the genre, they will no doubt struggle with most shooter games.