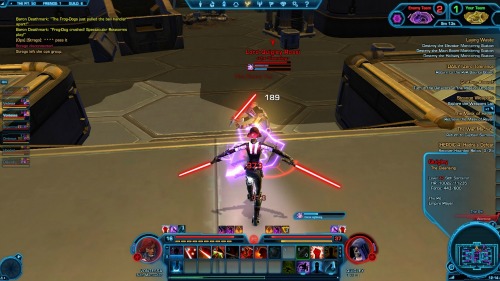 There’s no denying the popularity of MMOs. The ability to connect to a constantly changing universe, filled with thousands (if not millions) of human players that you can interact with, is attractive to many players. But this genre appreciated by disabled players for some very particular reasons.

MMOs benefit from an interface that is highly accessible to a vast majority of physically disabled players. For players with fine motor disabilities, it helps that MMOs, overall, have a slower, more strategic pacing. For example, in Star Wars: The Old Republic, the player doesn’t need to constantly tell their character to attack. They simply click on a target, and they will engage it. If they want them to execute a more complex maneuver, all they have to do is hit a button and the entire maneuver unfolds in front of them. Because of this method of control, fine motor skills and responsive muscles are not as critical in these games as they are in games such as Mortal Kombat.

Similarly, players with auditory disabilities should have very few problems with MMOs, since in most MMOs information is mainly communicated by text. Even if there is dialogue, it is usually thoroughly subtitled. The only sounds that exist in most MMOs are ambient noises such as gunshots and background noise. While it may take a player with a hearing disability a little longer to react to the important changes these sounds may indicate, such as coming under attack, the gameplay is usually forgiving enough that the player will have more than enough time to respond.

The only group that may seriously struggle with the accessibly of MMORPGs are those with sight disabilities, since a lot of the information that matters, such as the different types of loot, are only communicated through color. Therefore, a player who cannot distinguish between colors would have a hard time in the average MMO. To compound matters, most MMOs communicate information in large blocks of very small text, which may be difficult for player with visual disabilities to read. However, with the release of Star Wars: The Old Republic, Bioware proved that it is possible to make an MMO that at least avoids the pitfall of small text by having fully voiced NPC interactions.

Finally, if there ever comes a time when a disabled person cannot get past a mission because of their disability, there are usually hundreds of gamers who are both willing and able to help. This allows two players to finish the quest and makes it easier for the disabled player because they are playing with somebody.

The overarching reason for the high level of accessibility in MMOs is due to the way they are set up. In a game environment that focuses more on a social interaction than a competitive aspect it is easy to see why disabled players can thrive in this type of game.