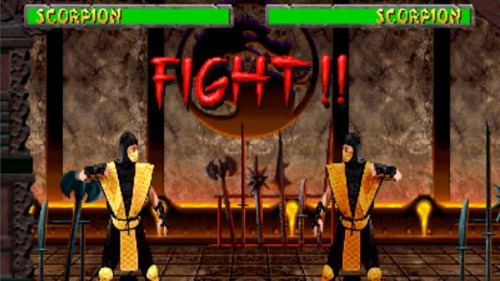 Our mission at DAGERS is to provide disabled consumers with the tools that they need to determine whether a game is accessible before they purchase it. To that end, in addition to reviewing individual games, we will also be addressing larger issues of accessibility. One issue that is critical to keep in mind when determining whether a game is accessible is its genre, since some genres are inherently more accessible than others. To that end, we will be publishing an ongoing series of articles that describe each genre’s major accessibility pitfalls. We will start with action games.

These games run all along the spectrum from the very accessible to the inaccessible. The genre is usually broken up into four sub-genres: fighting games, platformers, action-RPGs, and action-adventure games. Fighting games are perhaps the least accessible sub-genre. This is due in part to the rapid succession of buttons players must push in order to execute the more complex combos. Two such fighting game franchises are Soul Calibur and Mortal Kombat. Both of these are more accessible because, although they require complex button combinations to succeed, a player with fine-motor challenges can still excel by using the simplest combos that their hands can successfully execute. The one aspect that most dictates whether a fighting game is accessible is its pacing. A perfect example of this is found in the newest installment of Mortal Kombat. It is possible for players with fine-motor challenges to advance all the way through the campaign with minimal help, but then get stuck on the final battle, because the final boss, Shao Kahn, is both extremely fast and durable. As a result, a player has to be able to make Liu Kang do his advanced combos, which are generally too hard for those with limited fine-motor skills. In the standard mode, Shao Kahn shouldn’t be a problem, because, instead of using a softy like Liu Kang, a player can use a hard hitting tank like Jax or Sub Zero, which allows the player to move at a slower pace while dishing out heavy punishment. In general, in any fighting game, there will always be a point past which those with fine motor disabilities cannot proceed without having help completing the rest of the game.

Those with auditory disabilities should have no problem with the fighting game sub-genre, since most of these games have very little sound that actually affects gameplay. Similarly for gamers with sight disabilities, most characters in the average fighting game are very distinct visually. The one exception to this rule is when a player runs into a “mirror match,” in which the player is fighting the same character they are using. In such cases, the opponents are often identical except for a slight change in color which may not be visible to the sight impaired.

Platforming games, in general, are significantly easier for players with fine-motor disabilities. However, two problems arise that tend to make platforming games inaccessible. The first is precise timing, which can be difficult for such players. For example, the popular Prince of Persia series contains many puzzle sequences that require a player to beat the clock before a door closes or to precisely time a series of acrobatic maneuvers onto a moving target. The second issue is if a game requires very precise movement. For example, to reach the second boss of Sly Cooper and the Thievius Raccoonus, a player has to make Sly jump from stalagmite to stalagmite without falling into the water. As a result, the landing area on each jump is very small. It may be hard to complete this maneuver, since even while standing still and trying to aim Sly, a player’s fingers might overcompensate when flicking the joystick or when trying to turn Sly toward the exact spot. However, with enough patience players should be able to get past elements like these.

An auditory disability should not affect the vast majority of platforming games, since sound is often simply an add-on. Sight impairments only cause a problem in the platforming sub-genre when there is a game whose art style does not include clearly defined borders. As a result, a player who cannot see color or who has other visual impairments might not be able to distinguish between the foreground and the background in a game like Super Meat Boy.

One of the most notable series in the action-adventure sub-genre is The Legend of Zelda. Not only this franchise but most of the games within this sub-genre are extremely accessible for those with fine-motor problems. The most important aspect that lends to the accessibility of action-adventure games is that they are meant for a more casual audience, and therefore their pacing is slower. An issue of accessibility arises, however, when developers include aspects of other genres within an action-adventure game. For example, there are several puzzles within Ocarina of Time that require precise timing, but once a player gets past these, the rest of the game is thoroughly accessible. Another more recent example is found in Uncharted 2: Among Thieves. A player might be able to beat the entire game without help, except for one part in the Himalayan temple, where players are required to tap triangle repeatedly to open a door. If they cannot tap the button fast enough, they will need somebody to help them open two doors this way. The rest of the game should be completely accessible.

Once again, this sub-genre is not heavily affected by sound, except when it incorporates elements of other genres. For example, in Uncharted 2, it is helpful for a player to be able to hear the enemies so the player knows when they are about to be attacked. When looking at this sub-genre from the standpoint of visual disabilities, it must be taken on a game by game basis. This is because some games include puzzles that feature fine detail. As a result, a player with a sight disability may want to avoid these.

Finally, perhaps the most accessible sub-genre within action games is the action-RPG. Diablo 3 is a great example of this. This game has hack-and-slash commands that are incredibly easy for someone with limited fine-motor skills to execute, and it has the ability to customize the player’s character to fit the player’s play style. For instance, if a player has a hard time playing a witch doctor because a lot of his abilities seem to require timing, the player could play as a monk instead: charge in, let everybody surround the monk, and then blast them with area of effect attacks. This kind of customizability is an element of the action-RPG sub-genre that makes it thoroughly accessible to those gamers with fine-motor disabilities.

However, players with hearing disabilities might want to be careful with this sub-genre since most RPGs include deep stories that rely on cut scenes and dialogue. And if a particular game does not have thorough subtitles or closed captioning, it might be inaccessible to those who cannot hear. Players with sight disabilities might prefer an action RPG to a tradition role playing game because action-RPGs focus more on combat and seem to have fewer elements that would bar the sight-impaired from enjoying the game.

In general, the action game genre has some serious accessibility issues. Timing, pacing, and precision are among the largest problems. But if a disabled gamer can overcome these issues, the genre can be relatively barrier free.