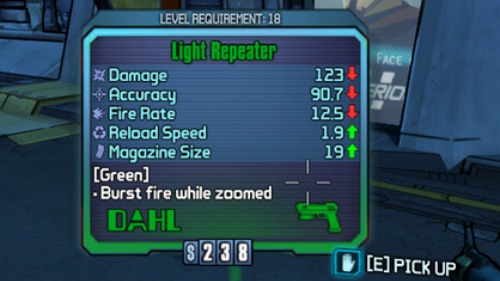 Colorblind Mode will be under Video Options and will allow players to choose between the three types of color vision deficiency – Deuteranopia, Protanopia, and Tritanopia. Inside The Box is a Gearbox Software forum that allows for the individuals behind the games’ development to share their personal views and opinions.

Mr. Broome related a story that disabled gamers know well. Concern about disability related features become pressing when a disability personally impacts our lives. Mr. Broome was recently diagnosed with color blindness or color vision deficiency. The terminology is based on a condition not typically consiting in the absence of all colors but rather in the difficulty with differentiating between particular colors. See his blog post here for a thorough explanation of color vision deficiency.

Borderlands 2 uses a loot system that differentiates the rarity of items with color. Mr. Broome discussed the behind the scenes details of implementing Colorblind Mode into Borderlands 2. The game includes a split-screen mode. Due to pre-existing coding that renders objects once with two cameras that allow for split screen use, enabling Colorblind Mode turns on the feature for both split screen players. As a result, Mr. Broome designed Colorblind Mode for modified colors as close to the original colors as possible so as not to confuse players who do not require the mode. If Colorblind Mode was added prior to shipping the game it would have been possible for items to display separate colors.

Mr. Broome notes that accessibility for color vision deficiency includes a user interface that does not rely solely on color to relay the information such as using text or icons. The upcoming Colorblind Mode also features text on item cards to communicate the color used for showing the item’s rarity. The first line of text at the bottom of the item card will state the item’s color such as “[Green].”

Mr. Broome noted a bug in Colorblind Mode where he accidentally copied and pasted the wrong color values for red in Protanopia mode which causes red and green to appear very similarly. The bug was discovered too late for changing before the update launches but will be adjusted in a future update.

As of now, the date of the update is not announced.

DAGERS’s Editor-in-Chief, Josh Straub, previously reviewed Borderlands 2 and awarded the game a rare Barrier Free rating. The review is available here. He referenced the color coded loot system stating, “It is true that the Borderlands 2 loot system uses color-coding to differentiate item rarity, but since the text is so clear, it will be easy for players to determine which gun is better even if they cannot distinguish the color…So, in general, it is nice that the stats on weapons are so clear, since the rarity color can be misleading.”

Adding a disability-related mode to Borderlands 2 after the release of the game is a welcome increase in both video game accessibility and awareness about disabled gamers. Borderlands 2’s color coded loot system may not have presented a substantial barrier due to displaying the item’s statistics numerically that allowed disabled gamers to compare items without relying on rarity. The addition of Colorblind Mode shows Gearbox Software’s awareness and commitment to disabled gamers for providing video game accessibility.