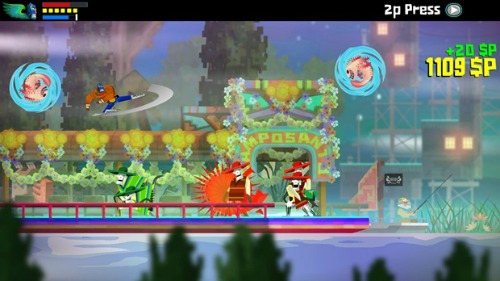 Microsoft announced its July 2014 lineup for Games With Gold where Xbox Live Gold members can download select games for free for a limited time.

The Xbox One will continue offering Max and the Curse of Brotherhood along with a new title and the Xbox 360 will receive two new games that are made available in a staggered release over the month of July.

On July 2, 2014 Guacamelee! Super Turbo Championship Edition by DrinkBox Studios comes to the Xbox One via ID@Xbox that allows for self-published games on the Xbox One. Guacamelee! was originally an April 2013 release for the Playstation 3 and the Playstation Vita. This edition packages previously released DLC and new content with the original game. The game will also be available for digital purchase on the Xbox 360 for $14.99.

The Xbox 360 receives Gotham City Imposters by Monolith Productions from July 1 to July 15, 2014. The game is a multiplayer first person shooter that pits two teams of six with one team inspired by Batman and the other team based on the Joker. The game is free to play on PC.

From July 16 to 31, 2014 Battleblock Theater! by The Behemoth will be available on the Xbox 360. The game allows for single player or co-op puzzle solving in a frenetic platforming environment based on blocks while an audience of cats watches on.

July’s Games With Gold offering is not particularly competitive with the offerings in Playstation Plus that includes Dead Space 3 for the Playstation 3 while July’s Games With Gold doesn’t offer a retail game. However, the games are free thus allowing disabled players the option to experience the games’ accessibility without incurring financial harm if the game is inaccessible.