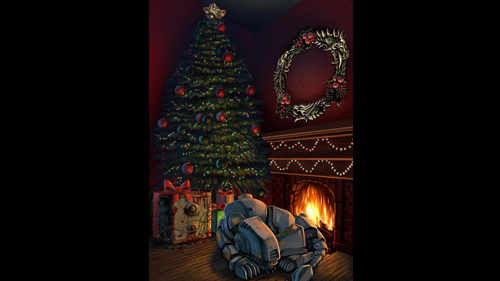 In celebration of the holiday season many game developers released online holiday cards thanking fans for a memorable 2013 and anticipating games to come in 2014. See below for our compilation of a few of the season’s greetings.

The 2013 Season Greetings card anticipates the upcoming 2014 games with an Elder Scrolls Online themed wreath, the Panzerhound of the Wolfenstein: The New Order reboot, and the bloody safe is indicative of The Evil Within but the barbed wire along the side is suspiciously in the shape of a four. Is Fallout 4 on the horizon? Only time will show us what the New Year will bring.

Capcom UK held a contest for a 2013 community designed holiday card. The winning design is a Monster Hunter theme by David Hankin. The monster pictured is Yian Kit-Ku and that cat is a “felyne.” For Monster Hunter fans, the card revives Yian Kut-Ku after the monster’s noticeable absence in Monster Hunter 3 Ultimate which released on the Wii U and Nintendo 3DS in March 2013. You can view the runner up designs here which range from tributes to the Duck Tales to Street Fighter to Remember Me.

In 2013 Guerrilla Games released Killzone Mercenary on the PS Vita and launched Killzone: Shadow Fall alongside the much anticipated Playstation 4. The Killzone themed card celebrates Guerilla Games’ 2013 achievements by replacing the reindeer (including Rudolph) with a more automated travel system.

Respawn Entertainment commemorates the end of 2013 with 2014’s highly awaited Titanfall. Celebrating the game’s multiplayer spirit, pilots decorate a Titanfall themed tree alongside a Titan while a sneaky pilot uses the tree for cover. Is the pilot hiding to spring an ambush or to reveal a holiday surprise? Plus presents under the tree of armaments and big caliber ammunition readies the Titans and pilots for the upcoming multiplayer frenzy in 2014.

The current undisputed champion in digital pinball gaming, Zen Studios, remembers a memorable 2013 that began with Star Wars pinball followed by the genre defying CastleStorm. 2013 kept spinning into a Marvel’s Doctor Strange table, Zen Pinball 2 on the Playstation 4, and on December 26, 2013 CastleStorm bounces onto the Wii U. 2014 only brings more pinball and more games.

2013 witnessed the beta of Elder Scrolls Online and 2014 will bring the MMO’s launch onto the next generation consoles, Xbox One and Playstation 4, as well as onto PC and Mac. Elder Scrolls’ fans eagerly await the storied franchise’ MMO debut. In the meantime, Zenimax Online Studios spruced up the Elder Scrolls Online logo with holiday cheer.

DAGERS’ sincerely thanks all of our readers for their support in 2013 and we look forward continuing reporting on disability in video gaming in 2014. Season’s greetings and a Happy New Year to all of our readers!