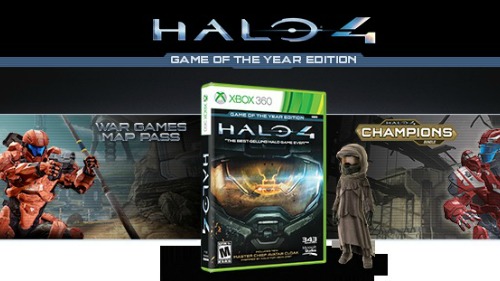 Black Friday and Cyber Monday may have passed, but the holiday spending season has only begun. Whether purchasing for yourself or gifts for others, this fall many recent games released bundles packaging the game with all of its DLC while costing less than the base game had on day one.

Many gamers are cash strapped for various reasons, and disabled gamers’ extra funds are often soaked up by out-of-pocket expenses related to their disabilities. Luckily, many developers have released fantastic games bundles that offer more bang for the buck. If the next generation is beyond your wallet’s capacity, new game purchases are still possible this fall.

343 Industries inherited Bungie’s Halo franchise. Halo 4: GOTY Edition includes a multitude of additional digital content, including a new Master Chief Avatar Cloak inspired by Halo for Xbox One, the War Games Map Pass including nine multiplayer maps, and over fifteen items from the single player campaign from in-game items to Xbox Live avatars and themes—not to mention the Halo 4 Champions Bundle including four packs with multiplayer maps, armor, and skins or weapons and armor.

The Xbox’s flagship franchise is a beloved sci-fi first person shooter, but each iteration has continued inaccessible features such as a lack of comprehensive subtitles, an emphasis on twitch based gameplay, and a chaotic and frenzied screen. With Halo 4, 343 Industries has finally ended the franchise’s noticeable lack of in-game subtitles. The gameplay remains twitch based, and there is an overabundance of onscreen commotion, but different controller customization options are available. Checkpoints remain difficult, and the new multiplayer approach with Spartan Ops contains cut scenes without subtitles. With the bundle, disabled gamers who are willing to contend with possible disability-based barriers can access the franchise’s revival with an all-in-one purchase.

Dishonored: Game of the Year Edition, released on October 8, 2013

Dishonored was my day one purchase in fall 2012. The blend of stealth and action resulted in a player-determined approach complete with the option for a nonlethal play through, which appealed to me. The new bundle includes the base game along with both its challenge pack and its in-game item DLCs, as well as the two episodes of single player content that expand on the narrative for Daud, an opposing assassin. The assassination abilities provide multiple gameplay options for disabled gamers. Viable stealth mechanics result in deep sneaking possibilities or a direct assault providing more than first-person gunplay. Aggressive gameplay provides accessible gameplay options such as freezing time to plant explosives or releasing rat swarms for help. Player combat choice even impacts the game’s environment with the chaos dynamic, resulting in enemy patrols and rabid rat swarms giving gamers indirect control on the game’s world and ultimately on the ending.

See DAGERS’ previous coverage with a review here and a nomination for 2012 game of the year here.

Deus Ex: Human Revolution: Director’s Cut is a unique bundle because the base game is retouched. In a pattern typical in games with accessible gameplay, this game provides both stealth and aggressive combat options. The game’s most common complaint was its unbalanced boss battles. Boss battles are inherently one-on-one fights, and previously the boss battles in Deus Ex: Human Revolution effectively punished stealthy gamers. In my original play though, my first boss’s combat style focused on various direct attacks. Due to my personal preference for stealth, the only weapons I had on-hand were a tranquilizer gun, a pistol, and a handful of grenades. My winning secret? I scrambled around the level until the boss’s AI glitched into walking in place into a wall where his own grenades bounced back and exploded on him.

With boss battles newly balanced and the DLC The Missing Link tucked into its chronological place in the main game, the bundle is practically a new game. The game gives disabled gamers equal access for combat choice and even includes a discussion on disability in the game’s narrative, as the game considers the impact of “bettering” humanity with augmentations to the human body—both for the disabled and the able bodied.

The base game, XCOM: Enemy Unknown, pits the player against an alien invasion, whereas the new expansion, XCOM: Enemy Within, adds new combat options to both forces as well as a rogue human entity seeking to aid the aliens. XCOM: Enemy Within is available on PC as an expansion or on the Xbox 360 and PlayStation 3 as a retail purchase including the original game, the expansion, as well as the previously released single player campaign and cosmetic DLC.

Its turn-based squad-combat gameplay is unique among console games. Turn-based squad-combat is very accessible for disabled gamers, granting all of the necessary time to survey the battlefield, review options, and assign the squad’s moves for the next turn. In fact, limitations on player action are based only on the number of “moves” needed to complete activities such as obtaining new rare material, melding, or assisting a squad mate who is bleeding out. This interface gives disabled gamers equal access by providing a set number of moves with which to complete the objective instead of requiring frantic gameplay alongside a timer. Additionally, resource management allows the needed time for decision making by granting the player freedom to pause and think so that they spend moves only when they have determined the best course of action. The expansion adds to the game’s complexity of managing resources and preserving humanity from the alien threat—all while maintaining XCOM’s renowned difficulty without hindering accessibility for disabled gamers.

See DAGERS’ previous coverage with a review here, nominee for 2012 Game of the Year here, and 2012 winner of the Editor’s Choice Award here.

Injustice: Gods Among Us Ultimate Edition, released on November 12, 2013

DAGERS’ previous coverage at the game’s original release in April 2013 noted the game for its accessibility for disabled gamers, especially as an arcade fighter. See our review here, and take a look at the follow up feature regarding the game’s accessibility here.

Following the initial game, NetherRealm Studios upgraded the game’s accessibility with a patch including an “Accessibility Mode” and responded to requests from the visual disability community for improved sound cues, such as when players are near to interactive items in the environment. For disabled gamers interested in the fighting genre, NetherRealm Studios released an accessible game and continued their post-release support by responding to requests from the disability community.

The Walking Dead Game of the Year Edition, released on November 19, 2013

In 2012, Telltale Games’ The Walking Dead built momentum over the release of its five episodes, culminating in winning the Game of the Year in Spike’s 2012 Video Game Awards. The newly bundled edition includes the complete first season, all five episodes, as well as 400 Days, the prologue for the upcoming second season. Additionally, it includes digital content such as the original game soundtrack and a behind the scenes video.

The Walking Dead revived and transformed the concept of a point-and-click game—a kind of gameplay not often available on consoles—and it also revealed the possibilities for episodic releases. The majority of the gameplay involves selecting conversational options with brief sequences of action gameplay in which the player fights zombies. Disabled gamers observe that the conversation options are often accompanied by a timer, but also note that not responding is a valid choice. The action-oriented combat sequences are typically quick time events coupled with scrolling for a point-and-click object, all of which must be completed within a set timeframe. A free demo gives disabled gamers access to the game to determine if the gameplay meets their disability-related needs. With the bundle, the entire game is available as a single purchase.