Game Accessibility – Five Games That Get It Right 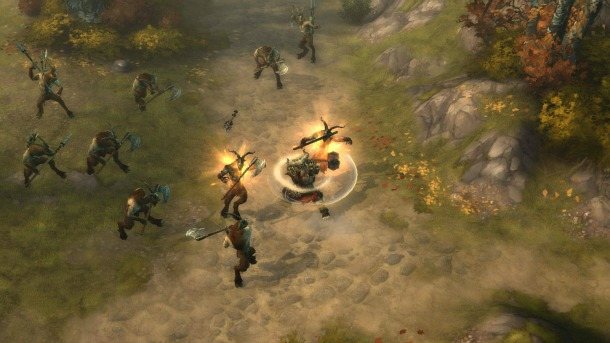 In my previous articles I established what game accessibility is and what developers need to do to achieve it. Now it’s time to look at a few examples of games that are already incredibly accessible.

These five recent games all set the standard for what accessibility should look like in their respective genres. They are remarkable not only because they are physically accessible, but also because they are accessible to both the sight and hearing impaired.

Blizzard is known for making good games, but apparently they can also make games that are highly accessible. Diablo III is a perfect example of this. The game’s control layout is so simple that everything important can be executed with one hand, since the game is entirely mouse driven. There are hot keys on the keyboard that can be used, but these also have on-screen icons. The game is very forgiving, in the sense that the player tells the character to attack once, and the character will continue attacking until directed otherwise. Even using special abilities does not prevent the auto-attack from continuing once the special has completed. Auditory disabilities offer little hindrance in the enjoyment of the game since there is very little ambient dialogue, and all dialogue spoken directly to the player has subtitles. If a player is colorblind, they will also be able to enjoy this game, because everything that is denoted by color (such as item rarity) is also written in a text description. But perhaps where Diablo III really shines from the standpoint of accessibility is in its customization. Between the five major classes and the various powers you can unlock and use with each, any player, regardless of whether they are disabled, should be able to design a champion that would fit their play style.

This game defines the idea of an accessible first-person shooter. In addition to subtitles that even encompass overheard conversation, this game also puts a ring of light around important objects that the player can interact with. Its visual accessibility is augmented when you consider that the radar is not only color coded but also shape coded, making it easier for a player who cannot distinguish between colors to differentiate between friends and enemies. The game also features text that is readable from several feet away, ensuring that even those with visual disabilities would be able to read it. From the standpoint of fine motor disabilities, Deus Ex is thoroughly accessible, even though there is only one controller layout for the console version. This is because in addition to fully-remappable controls on the PC version, there is enough character and skill customization so that if you can’t perform a particular maneuver, there are other ways of accomplishing your goal. For example, if a player is having difficulty with a level because they are being swarmed by enemies and they can’t react quickly enough to deal with them, there is more than likely another route available that will take the player past these enemies without having to confront them directly. And if that’s not an option, the player also has abilities such as invisibility and area-effect attacks to deal with the threat.

LEGO Batman 2 is the latest in a series of LEGO video games that are all thoroughly accessible. Batman 2, specifically, has that casual arcade-style feel and pacing that means a player doesn’t have to be fast to enjoy the game. In addition, this game also has a simple control scheme. The only buttons needed to play are on the face of the controller, no matter which console you are using. As a result, if a player needs to, there is no problem in using one hand to control the stick while the other performs the necessary actions. A player with a sight impairment or colorblindness could enjoy this game, because, due to the game’s connection with LEGO building blocks, everything important has very distinct shapes. The only point at which this does not apply is in the collecting of pips, the game’s currency, because different values of currency have different colors but not different shapes. But since one of the objects of the game is to collect as many pips as possible, it is doubtful that this would present much of a problem. The game is also impressive because it includes cutscenes that have subtitles throughout and hints that pop up in text form during game play. And since there is no opportunity for overheard conversation, this game has all the subtitles it needs.

MMOs in general, are extremely accessible. Star Wars: The Old Republic is no exception. With the addition of a recent data patch, the heads-up display is completely remappable, allowing players to organize the user interface in a way most comfortable to them. The combat in the Old Republic is as simple as clicking a command, and watching it being executed. Features like a built-in auto-run help out with fine motor limitations. Similarly, auditory impairments should have little impact on the game, since all the important dialogue is subtitled, and the heads-up display makes it clear when a player is under attack. The one accessibility area that a lot of MMOs seem to struggle in is visual accessibility. However, SWTOR is a welcome change to that trend. Because BioWare took the time to make sure that all of the NPC interactions are fully-voiced, players will not have to struggle with tiny, unreadable text. Similarly, because the game features special lighting for important objects, if a player is colorblind, they should still be able to differentiate between important times. There is a small amount of tiny text that is not spoken. But this alone will not create a barrier for visually impaired players. In general, Star Wars: The Old Republic should be considered one of the most accessible MMOs on the market.

The Pokémon series of games is one of the most accessible franchises in gaming. No disabled gamer should be unable to play Soulsilver and Heartgold since they are both turn based, and time and reflexes are not a factor, except in a few isolated minigames. The titles are paced in such a way that fine motor skill really doesn’t enter in to whether a player can beat it or not. Neither does auditory ability, since there is no spoken dialogue, and everything is read on screen in large, clear text boxes. Because the newer Pokémon games all still operate like the original games for Game Boy, color is not a factor in whether or not this game is playable. All of the important elements are extremely distinct, and it would be difficult for a player to confuse them. Combine that with the simple A-B control scheme, and this is a game that is almost completely barrier free.