Free Game With The Purchase Of An Xbox One 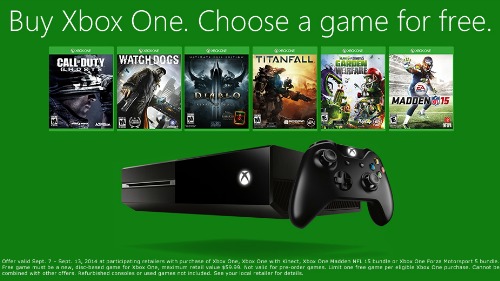 Microsoft is running a promotion from September 7 to September 13, 2014 in which a purchase of an Xbox One is rewarded with a free game of the player’s choice.

For one week, buying an Xbox One at participating retailers comes with any free Xbox One game.

All available games, from the upcoming Destiny to the recently released Madden NFL 15 to the Xbox exclusive Titanfall, are eligible for the promotion. The only restriction is that the game is a new, physical copy which excludes pre-order games and digital codes. The deal applies to any Xbox One including the current console bundles that are packaged with Madden NFL 15 or Forza Motorsport 5.

Microsoft is beginning the fall game release rush with aggressive promotions that put Xbox Ones and its games into the hands of gamers. The Xbox One deal was announced a day after the news that Forza Motorsport 5 is free for Xbox Live Gold Members from Thursday, September 4 to Sunday September 7, 2014. The promotion is targeted to rev up excitement for the upcoming launch of Forza Horizon 2 on September 30, 2014. You can see DAGERS’ disability accessibility review of Forza Motorsport 5 here.

Promotions that provide cheaper opportunities to play more games on the Xbox One benefits disabled gamers by providing firsthand playtime at a lower cost of entry. While the two promotions don’t overlap disabled gamers interested in making the console transition have a more affordable chance to pick up the console before the rush of game releases begins.