Four Things the Next Thief Must Get Right 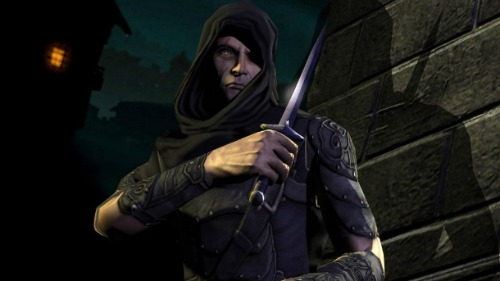 This week, Game Informer Magazine released its monthly issue, the cover story of which is an exclusive on the reboot of one of the first real stealth franchises, Thief. However, there are some details highlighted in the existing coverage of the new Thief that raise concerns that this reboot will not be as accessible as its predecessors. To that end, we’ve compiled a list of four things that Eidos-Montreal must get right if disabled players have a hope of enjoying the new Thief.

Three pages into electronic edition of the Game Informer cover story, editor Ben Reeves recounts a scenario where Garrett barrels through the City in order to reach a high-class brothel. The sequence reads,

“From the roof, Garrett can see the red lights of the House of Blossoms off in the distance. The clock at the center of town clangs midnight; Garrett must hurry to reach the brothel before the gates close at the bell’s final toll.

Garrett barrels over the city’s skyline, diving from roof to roof until he slides down to street level again. He bounds over merchant tables and under wagons, then dives through the window of a nearby building, using this apartment as a shortcut to avoid circling the block. Reaching his destination in the nick of time, Garrett watches Eastwick pass through the secret entrance into the House of Blossoms.”

On its own, this simply sounds like an action packed cinematic that would be at home in any self-respecting action RPG. The problem is, Reeves states emphatically in the next paragraph that it’s not a cutscene. This raises the concern that the new Thief game will have tightly timed action sequences that don’t have much room for error. It is true that there are features like this in other games such as Assassin’s Creed (for example, trying to beat a civilian in a footrace so that you can recruit him as an assassin). But experiences like these are often side quests and can be skipped if a player cannot physically get past them. Unfortunately, however, it’s pretty clear that the scenario that Game Informer is describing is an integral part of the opening of the new Thief, and it raises the question of whether disabled people will even be able to get past the first objective of the game, let alone the first level. This is even more troubling when one considers that if Eidos-Montreal sets this precedent at the very beginning of the game, it’s likely that more timed sequences will appear as the game progresses. The new Thief has to do one of two things in regard to timed sequences: either avoid them altogether, or give players options that compensate for slow reflexes and reaction time.

Moving forward in the article, we see an encounter with a locked safe described. The picture on page nine of the cover story shows a mini-game that is eerily similar to the Elder Scrolls: Oblivion lock-picking mechanic. Since mini-games that take this approach to lock picking often have a heavy reliance on twitch reactions, this again begs the question, will the new Thief be accessible for those with fine motor disabilities? In a game that’s called Thief, one can probably expect to meet with a lot of opportunities for lock picking. But if the mechanic is too sensitive or unforgiving (e.g., making players break lock picks when they fail to pick a lock, thereby limiting their number of attempts), it’s easy to see how disabled players will be left out of the game if such an integral part of the experience is inaccessible. The good news is, Eidos-Montreal has several options for how to limit the barrier this might cause. Most likely, players won’t be required to pick locks, since the article seems to highlight the open world nature of Thief and the fact that there are multiple avenues of approach. But if they do have to pick locks, the developer could make the lock-picking mechanic easier by not incorporating time delays or the need for twitch reactions or could make it incredibly forgiving and give players unlimited attempts each time they pick a lock. Either way, Eidos-Montreal will have to address the accessibility of lock picking if disabled players are not going to be left out of the new Thief.

The third barrier that this new title seems likely to pose is the issue of visual accessibility in environments that are too dark. Thief has always been a franchise where darkness is the player’s friend and where the ability to see clearly in low-light situations is critical. In the original Thief game, all the fine detail was so overstated (due to graphical limitations) that even if the level was dark, it was still easy to see when a guard was standing in front of you. But because Thief is embracing next generation hardware, it is obvious that the game will be able to use a much more nuanced graphical interface. The pitfall that Eidos-Montreal has to avoid here is too much reliance on ultra-fine detail. If players have to be able to pick up lock picks the size of toothpicks in a darkened room, players with visual disabilities will definitely struggle with this title. But the team behind Thief seems to have already compensated for this barrier by giving Garrett a special focus mode that highlights any item that the player can interact with (see the picture on page twelve of the cover story). Unfortunately, this opens the door for another barrier, especially if a player is colorblind. If Thief’s developers are not extra careful to make the highlighting in focus mode clearer and more distinctive, it is likely that players who cannot distinguish color will not be able to use what is presented as the game’s central mechanic. All Eidos-Montreal has to do is make sure that it is obvious when an item is highlighted without relying on a color-coded system.

Finally, the biggest feature that may cause a problem for disabled players is not mentioned directly in the article. The reboot of Thief must have a way of communicating auditory cues visually. If not, players with auditory disabilities will have no chance of making it through this game, since Garrett is not a fighter and can’t stand up in a head-to-head fight if he is discovered by guards. Players have to have a way of gauging a guard’s awareness by looking at them. That way even if they lack the ability to hear, the most vital piece of information possible in a stealth game will still be accessible for them. There have been several games that do this well. Dishonored has a graphical bubble that appears around a guard’s head, signifying their alertness level. And in the Assassin’s Creed games, the radar interface changes colors as the guards become more aware of the player’s actions. Eidos-Montreal would do well to look at either of these games when determining an accessible visual interface for communicating auditory information.

Quotes and page numbers of this article from the April 2013 Game Informer Magazine, digital edition.