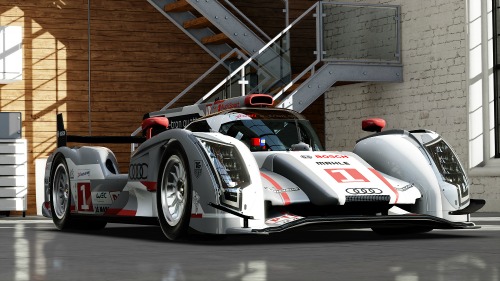 Turn 10 Studios and Audi released a new video documentary in anticipation of the upcoming launch game, Forza Motorsport 5, the latest in the celebrated Microsoft franchise, for the Xbox One on November 22, 2013. The video is viewable here.

Audi’s reigning FIA World Endurance Championship racing team, Audi Sport Team Joest, has attested to the relationship of the video game with the real world sport. Interviews include racing drivers such as Benoit Treluyer (an R 18 e-tron Quattro driver and a two time winner of the 24 Hours of Le Mans) and Forza Motorsport 5 Creative Director Dan Greenwalt. Tom Kristensen (nine-time winner of 24 Hours of Le Mans) boasted of the 2012 Audi #1 Audi Sport Team Joest R18 e-tron quattro in Forza Motorsport 5, which blazes across screens at 1080 resolution and 60 frames-per-second on the Xbox One. “Now everyone can share in the passion of driving this car,” Kistensen said. Overall the video features a series of interviews with Forza Motorsport 5 footage, all of which is touted as in-game footage, not CGI rendered sequences.

Additionally, Turn 10 Studios confirmed that Le Mans Circuit de la Sarthe is playable. Other circuits included are the Circuit de la Sarthe and the track’s Old Mulsanne version as well as the return of the Bugatti Circuit. The Le Mans track was created from scratch and required high end video game hardware including the latest in capture technology such as “laser-scanning” and the introduction of physically based materials for a photorealistic racing experience.

The complete list of raceable Audi vehicles in Forza Motorsport 5 includes the following:

The featured video, a bit over five minutes long, with a series of interviews was indecipherable for me as a deaf gamer partly due to mumbling as well as the prominent music and racecar sounds. The basis of the video other than images and information relayed in text is lost on me. I recognize that internet content is not required by United States’ law to provide closed captions, but moving into a new console generation I am hoping that more developers provide captioning to their games’ promotional materials.

The video did not include much gameplay for showing the game’s controls and visuals. Forza Motorsport 5 disabled gamers can experience the previous franchise iterations for an understanding of the upcoming game’s likely controls, visuals, and captions. The 2011 Forza Motorsport 4 and the 2013 Forza Horizon both have free game demos available on Xbox Live.