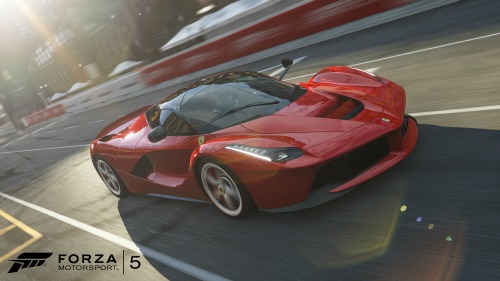 For a franchise first all of the game’s vehicles will be available in Forza vista mode allowing for complete detail both inside and outside of the car. Forza Motorsport 5 is advertised as including hundreds of cars and in comparison Forza Motorsport 4supported 24 cars in its Autovista mode.

After the game launches, Car Packs will be available for purchase the first week of every month from January 2014 to March 204. Each Car Pack will include 10 cars. The day one Car Pack is the LaFerrari Car Pack showcasing the highly anticipated hypercar that is limited to 499 global production units. LaFerrari is powered by a 950 horsepower engine and is already dubbed one of the rarest cars in the world. Forza Motorsport 5 fans are given the opportunity to drive the car before its real world release.

For the car enthusiasts, the Car Pass grants full access to the first six Car Packs for $49.99 which is an advertised 18% savings versus buying the Car Packs individually. Additionally, the launch day Car Pack has 9 cars that remain unannounced. More information on the LaFerrari Car Pack is teased for November 18, 2013.

More variety is always welcome from the disability perspective and more cars allows disabled gamers the options that best suit their disability related needs. The access into cars before the cars are available in the real world is a digital treat for car fans.

With the game itself retailed at $59.99, the Car Pass offers the first 6 DLC releases for a total of 60 additional cars at the $49.99 price point. Whether or not we continually see DLC content that is comparable to the price of the game in the next generation remains to be seen. Luckily, DLC bundles typically remain an option long after the game launches allowing for hands on experience before paying the extra monies.