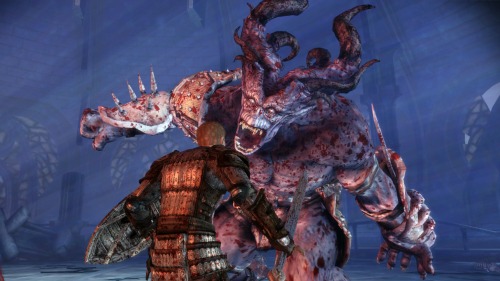 It’s nice to know that certain franchises are characterized by certain types of accessibility. Here are five of them that exemplify what it means to be both incredibly fun and accessible.

Although this franchise only has two installments (with a third one upcoming), BioWare has demonstrated with the Dragon Age titles that it is possible to make an engaging RPG that is incredibly accessible. Whether you have a hearing, fine motor, or sight disability, the Dragon Age series should be accessible for you. This is because in addition to extremely forgiving combat, the game also features a visually accessible interface, and does not rely solely on sound to communicate anything. Also, because of the way the game is laid out, players have choices that will allow them to structure characters and situations in such a way that their disability should not provide them with a barrier. Have a problem with reflexes and can’t unleash powerful combos? No problem. Just design a character that’s heavy enough to take a lot of punishment, and the game will be accessible. This freedom of choice is the number one factor in what makes the Dragon Age games so accessible. In addition, these games are just very high quality games, and should be recommended to any player who is looking for a game that has a great story backed up by great gameplay. The bottom line is that no matter what a player’s disability they can still enjoy these games.

I may have already said it, but the Pokémon games are, by far, the most accessible games on the market. Period. The combination of very little dialogue and no reliance on sound, a distinctive art style, and turn-based gameplay means that any player will be able to enjoy these games to their fullest. The entire franchise features the same open world freedom which means that players can move at their own pace, which allows players with any disability to take the time necessary to compensate for any barriers they might run into. The art style means that players with sight disabilities will have no problem with this game because everything is distinct and clear, and nothing is communicated with color alone. And finally, the fact that there is very little text in Pokémon (or dialogue of any kind) means that players won’t need to have perfect vision in order to understand what is going on. All these factors combined mean that if you’re looking for an accessible handheld game, Pokémon is the surest bet for something that is both completely barrier free, and incredibly fun.

Strategy games can be a mixed bag for players with disabilities, but the recent entries in the Civilization series set an example for what it means to have an accessible strategy game. Whether it’s the visual interface, which is not color-coded and uses large, easily distinguishable icons, or the fact that the game does not rely on sound at all, this game is incredibly accessible for all players. But the biggest reason why Civilization is on this list is the fact that it is a turn-based strategy game, which eliminates any penalty players might have run into for taking time to complete their turn. This ability to play at your own pace means that no matter how long it takes a player to manipulate the game interface, speed will be no hindrance to the game’s enjoyment. As a result, the Civilization games are a perfect example of an accessible turn based strategy game on the PC.

Although it may seem strange to include the reboot of the Mario series in a list of accessible franchises, New Super Mario games definitely deserve a look when trying to find titles that are accessible. Yes, they are platformers. But within that definition, these games function admirably. They are much more forgiving than other platformer games on the market, so as even to provide the player with tools (such as the Gold Tanooki suit) which help disabled players overcome the challenges inherent in these games. Additionally, because Mario has never relied on sound or color to communicate vital information, they are equally accessible to players with hearing disabilities and with certain sight disabilities. Usually platforming games are brutally inaccessible because of the timing and spatial awareness required to progress through them. But the New Super Mario games give players enough help that even with a disability the game can still be enjoyed—especially when you factor in the new “boost mode” displayed in the newest installment, New Super Mario Bros. U, which gives disabled players the option to play alongside their able-bodied friends without having to worry about whether their disability is a hindrance to the other players on their team.

Blizzard’s classic isometric franchise exemplifies a different kind of accessibility than most other accessible games in the industry. It’s a live action game and yet the controls can be operated from one hand. By itself, this extreme simplicity would make Diablo well worth a look for any disabled player. But combine that with the fact that it uses thorough subtitles when needed, and has a fairly visually-accessible interface, and you have a game that anybody can enjoy. But again, this is just the basis of what makes Diablo so accessible. It gets even higher marks when you take into account that players have the ability to customize their characters to fit their play style. By giving players this ability, Blizzard has in effect made it possible for each disabled gamer to tailor their experience from the standpoint of their physical ability, which ensures that the game is accessible no matter what a player’s challenges are.