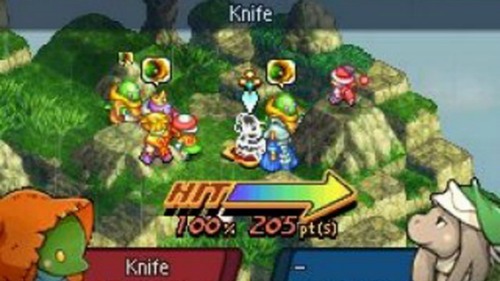 For the most part, most of the big summer games have been released, and reviewers are holding their breath for the next week and half until August starts the whirlwind that is the fall release schedule. During my downtime, I find myself going retro, playing older games across multiple systems. This trip down memory lane has made me miss now dormant franchises that are some of the most accessible in gaming. Here are five, in no particular order.

Final Fantasy Tactics Advance was one of the first games that I could play all by myself. I remember eagerly breaking out my Gameboy Advance SP after school to spend some time questing for the crystals. The original Final Fantasy had all the benefits of the Advance version, with the added benefit of a really good story. But the most impressive thing is that these games are completely accessible. For those of you who are unfamiliar, these games were turn-based strategy games set in the Final Fantasy universe. Like XCOM and Fire Emblem, players would take turns moving soldiers around the board within given movement patterns. They could also customize each unit and level it up, unlocking different classes along the way. As a result, Final Fantasy Tactics Advance put players on an even footing regardless of whether they had a disability or not, since fast reflexes or the ability to see color didn’t affect the gameplay.

Burnout
This week, when I had nothing better to do, I found myself playing Burnout Paradise. Developed by Criterion, the folks behind the Need for Speed reboot, this game was a more accessible and forgiving racer than its more popular competitors. The reason? Crashes. The Burnout series was always built on the concept that crashing was a good thing. The more spectacularly a player crashed and the more vehicles they took down with them, the higher they scored. As a result, Burnout had modes dedicated to more “aggressive” styles of play, such as “Road Rage” in which players were supposed to wreck a certain number of opponents before the time ran out. The reason why this concept is fundamentally more accessible than a lot of racers is because people with fine motor disabilities are probably going to crash in any racing game they play. So why not reward them for it?

Myst
Many people reading this probably have never even heard of this point and click franchise which died out around ten years ago. Myst and its sequel Riven (pictured above) were beautifully rendered point-and-click puzzle games that landed players in the middle of mysterious realms and tasked them with solving puzzles which eventually allowed them to save the world and escape back to civilization. Myst in particular thrived on a feeling of abandonment. There wasn’t much dialogue in the majority of the game, and the dialog that was there was subtitled. And because of the point-and-click format, the game could be played easily simply with the use of a single finger pushing a mouse or trackball around and clicking. But the really great thing about Myst was that it gave disabled players a game that tested their mental skills without taxing their physical ability. Games like these are none too common in the industry, and it’s a gap that a new Riven or Myst game could fill well.

Age of Empires
Historically based RTSs, the Age of Empires games had a slower pacing than games like StarCraft, which made them more accessible for players who lacked the quick reflexes necessary to succeed in other games. Players were given control over their choice of dozens of historical armies, which were all fundamentally the same with the exception of one or two units or buildings unique to each. The slower more tactical pacing meant that players with fine motor disabilities could handle it more easily. But also the method of storytelling made it easily accessible for those with hearing disabilities. In Age of Empires II: Age of Kings, each mission briefing was displayed in text as well as using a voiceover, making it easy for players with hearing and sight difficulties to catch all of the game’s historically-driven story. But because of an MMO version of the game, developers have not focused on releasing another AOE title. But if you are interested, the second installment of the game is available in HD rerelease on Steam.

Fallout
I’m not sure if Fallout belongs on this list, since I’m pretty sure they are making a new one. But we haven’t heard anything yet, so for now it fits. It’s no secret that open world games where players can choose between hundreds of tasks and thousands of character customization options (such as armor and weapons) are more accessible than just straight linear games. One of the most popular franchises to offer this is the Fallout series. Set in a post-apocalyptic wasteland, it can justifiably be called the Elder Scrolls with guns. And the added ability to engage enemies at long range makes the Fallout series more accessible than the Elder Scrolls series since there is less of an emphasis on up-close-and-personal combat which can require quick reflexes. This, coupled with the extreme amount of choice and flexibility of gameplay, makes the Fallout series historically one of the most accessible in the industry.