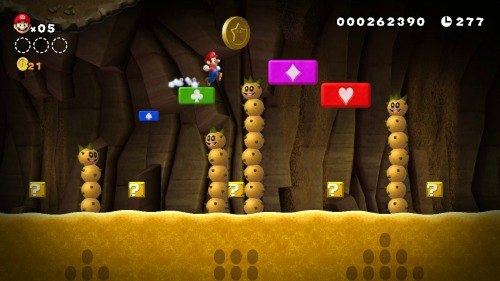 This is the newest game on our list and is a great example of how a game can have accessible multiplayer if it allows players to assume different roles. When playing New Super Mario Bros. U multiplayer, disabled gamers have two options. They can either pilot one of up to four characters on the screen with the Wiimote, or if the controls are not accessible, they can choose to use the system’s GamePad in what is called “boost mode.” The person who uses this controller is responsible for placing blocks in the level that help (or hinder) the players on the screen. As a result, all a player needs to do when using boost mode can be done with one finger. They can either place blocks to help Mario and his pals reach particularly hard areas in each level, or they can gleefully sabotage them by placing blocks in midair to block other players and make them plummet to their deaths. The player in boost mode also has the ultimate power. They can tap enemies in the level and stun them or squish them (as the case may be). As a result of all these features, no matter what a player’s disability, they can always enjoy New Super Mario Bros. U with their friends.

Minecraft has garnered quite a following among PC gamers in the past couple of years. The opportunity to play with a virtual building block set that allows the player to create anything they can imagine has attracted millions of players. In addition to its addictive single player mode, Minecraft also has an incredibly accessible multiplayer mode which is identical to single player, but simply adds a drop-in/drop-out element. Because of its art style, everything in Minecraft is incredibly visually accessible. Sound is not used much, and when it is, the game is forgiving enough to be accessible for those with hearing disabilities. And finally, the control layout for PC is so easy to use that it can be done with one hand if needed. But the reason the multiplayer is so good is that it takes all of these accessible elements from the single player, and gives players the opportunity to enjoy the game with their friends, simply placing multiple players (instead of one) in a randomly generated world. As a result, all of the accessible features of the single player carry over into the multiplayer and make this game one of the best PC multiplayer experiences.

This older PS3 exclusive exemplifies what it means to have an accessible first person shooter multiplayer. Part MMO and part military shooter, MAG has no storyline, but gives players the opportunity to engage in up to 256-player battles. The game also features an extensive class system and level progression system which allows players to invest in the role of their choice. Most first person shooters only give players experience points for killing the enemy. Not MAG. In this game, players also receive points for whatever actions they do, whether it be planting mines or reviving comrades. As a result, no matter what a player’s challenges, they could invest and level up a character that would always be able to help in the larger squad-based combat of MAG. The game also features enough control customization that players with fine motor disabilities are likely to find a controller setup that their hands can handle. And while it is true that this game suffers from some of the visual and auditory barriers that are common to all first person shooters, it has the closest thing to an accessible first person shoot multiplayer experience that a player can find on the market.

I have never considered myself good at multiplayer in games—except for Assassin’s Creed. That’s because the Assassin’s Creed is designed in such a way that it takes out many of the barriers that are common to other multiplayer experiences. The gameplay is much slower and stealth based, which eliminates the twitch timing needed to succeed in other games such as Call of Duty. This game allows the player to take their time and stalk their opponent and actually awards them for being patient. Each match involves up to eight players and several bot version of each player. The player’s goal is to kill their target as stealthily as possible. To do this, the player has to be able to distinguish between the bots and the actual players, since killing a bot is not worth anything. This may seem like it would make the game inaccessible to players with sight disabilities, who are not able to catch the finer details that betray a human player. But the game also uses obvious visual cues to tell you such important information as when a player is standing near their target and when the target is in their line of sight. The game also has audio cues that communicate if a target is close and if a player is close to another player who is hunting them. This balance between visual and auditory cues and the pacing of each match make the multiplayer of Assassin’s Creed III accessible for all players.

The Pokémon series of handheld games is by far the most accessible multiplayer in gaming today. The game has no important sound of any kind, and all of the text is written in large blocks of speech. Due to their turn based nature, these games are even more accessible because they can be played with one finger, since all players need to be able to do is select the appropriate Pokémon combat attack or item from a list and press ‘A’ to execute. But this does not mean that the Pokémon multiplayer is too easy or shallow. It’s a truly strategy based experience, where you have to know the weaknesses of your Pokémon as well as the weaknesses and strengths of your opponents. Tactics is everything in this game, and players don’t need to be able to use more than one finger to enjoy a bout with their friends.