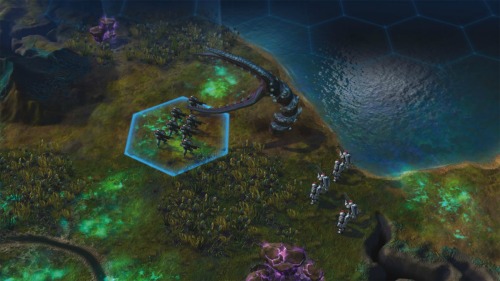 In the days leading up to PAX East Firaxis Games teased the announcement leading to much speculation about the mysterious game. Beyond Earth will release in fall 2014 on PC.

In the four years since the release of Civilization V and its ensuing expansion packs, mankind is now travelling to the stars to satiate gamer’s world building needs. In Beyond Earth, the collapse of modern society resulted in a move into deep space for a new beginning. Rather than conquering the known globe, players will build-up an alien planet as a new home for humanity.

Players are given the choice between one of eight expedition sponsors who are coupled with individual leaders and unique gameplay benefits. Players’ decisions on the spacecraft, cargo, and colonists will establish the game’s early starting conditions. However, the player’s ongoing decisions that crafts the planet’s technology ultimately leads to a distinct victory condition.

Other features include a quest system for additional resource gathering, the orbital layer that provides support from the planet’s orbit, customizing units to reflect the player’s playstyle, competitive multiplayer of up to eight players, and mod support.

Sid Meier’s Civilization series is an AAA franchise that is often accessible for disabled gamers as a turn based strategy game that recognizes disability related needs such as large icons that don’t depend on color and not requiring audio cues for gameplay communication. See DAGERS highlight of Civilization for video game accessibility here.