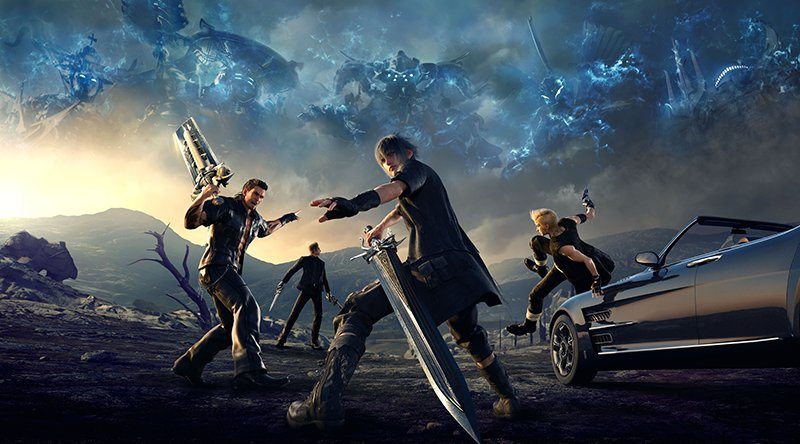 This is a road trip for the ages. Prince Noctis has a long way to go before he can reunite with his bride-to-be, but with the help of his three best bros he’ll get there. Along the way, Noctis will have to fight dangerous creatures and save what’s left of his kingdom. His marriage and his role as future King will be key to restoring peace in the land. Final Fantasy XV is the long-awaited action RPG in the iconic series made by Square Enix. The game has been in development for over 10 years and has gone through several rewrites, but it’s finally here. Final Fantasy XV is the first full-fledged game in the series to be released on the PlayStation 4 and offers a large open world to explore. You can spend hours getting lost on the continent of Eos while you locate new side quests or play tons of minigames. Whether it was intentional or not Square Enix also made a nice effort to make Final Fantasy XV have accessible gameplay.

Final Fantasy XV has a variety of control options available. For combat, you are given the option to toggle between Active mode and Wait mode during battle. Wait mode is similar to the turn-based style of gameplay where time stands still in between each action allowing for longer decision-making periods. As far as customizable controls, there are three different presets to choose from in Final Fantasy XV and they change all the buttons drastically for each one. From the trigger buttons to the control stick buttons, every one of them can be altered more than one way. The action button is used for jumping and interacting with people and objects, while the cancel button is for attacking and holding it down allows for sprinting. Utilizing the right control options will make fighting in Final Fantasy XV extremely simple. Although you are able to perform chain attacks with party members and you can access the item menu using the trigger button, I can guarantee you won’t really have to press more than the cancel button while you’re fighting. During battle, Noctis will automatically lock on to the nearest enemy and on top of that you can hold down the attack button to continuously fight any enemy nearby without having to aim in the right direction. There are a variety of minigames in Final Fantasy XV like fishing, racing, and darts. All of them have different control schemes. However, they are fun and easy. They are also entirely optional. Traveling in Final Fantasy XV is a breeze. Noctis and his three best friends are escorting him on this journey with the kingdom’s Royal automobile. You’ll be driving most places in the game and you’re given the option to manually drive or let one of your party members take the wheel. To allow someone else to drive, all you have to do is choose a location on the map and you’ll be taken their automatically. You can seriously just lay back and watch as your friends chauffer you or you can skip the cutscene entirely if you want. You’re also able to fast travel to previous locations using the map menu. Even if you have been exploring the wilderness, using the map you can fast travel to the last place your car was parked. I should probably mention that you do have to use the directional pad instead of the left control stick when maneuvering through most in-game menus. Also, if I were to nitpick I would say that it would have been nice to have a camera that followed you and compensated for the direction you were headed in. Still, Final Fantasy XV does a great job with the control options and gamers with fine motor skill impairments will have an easy time.

For gamers with hearing impairments, don’t worry because Final Fantasy XV has subtitles available. The subtitles are large and has easily readable white font. The game even lets you know who is talking, when it’s taking place, and where they are in the world just for clarification. While exploring the world or during combat your party members will talk amongst each other in the background. Final Fantasy XV makes sure to have subtitles for this dialogue as well. Although the soundtrack will occasionally have epic orchestral pieces it’s usually pretty boring and bland, so you won’t lose anything if you can’t hear the music in the game. Sometimes music will change to signify a battle, but there’s always a visual cue to accompany it. On the visual side of things, there are few good options available to disabled gamers with visual impairments in Final Fantasy XV. If you feel like the screen is too cluttered, then you can turn off the HUD whenever you like. You are able to change the view of the over-the-shoulder camera by moving it closer or farther away from Noctis. When you find yourself in a dark environment in the game Noctis and the other party members will turn on their flashlights automatically. There’s also a brightness slider you can change in the options menu if you need more light.

I’m legitimately surprised that I had so much fun playing Final Fantasy XV. I wasn’t happy with how Final Fantasy XIII turned out and I was worried that Final Fantasy XV would be a train wreck because of how long it was in development, but this game did not disappoint me. The open world environment in the game is a great feature that they brought back to the series and the story is very straightforward. Most importantly, the accessibility options available in Final Fantasy XV allow for disabled gamers of all types to play the game with ease.