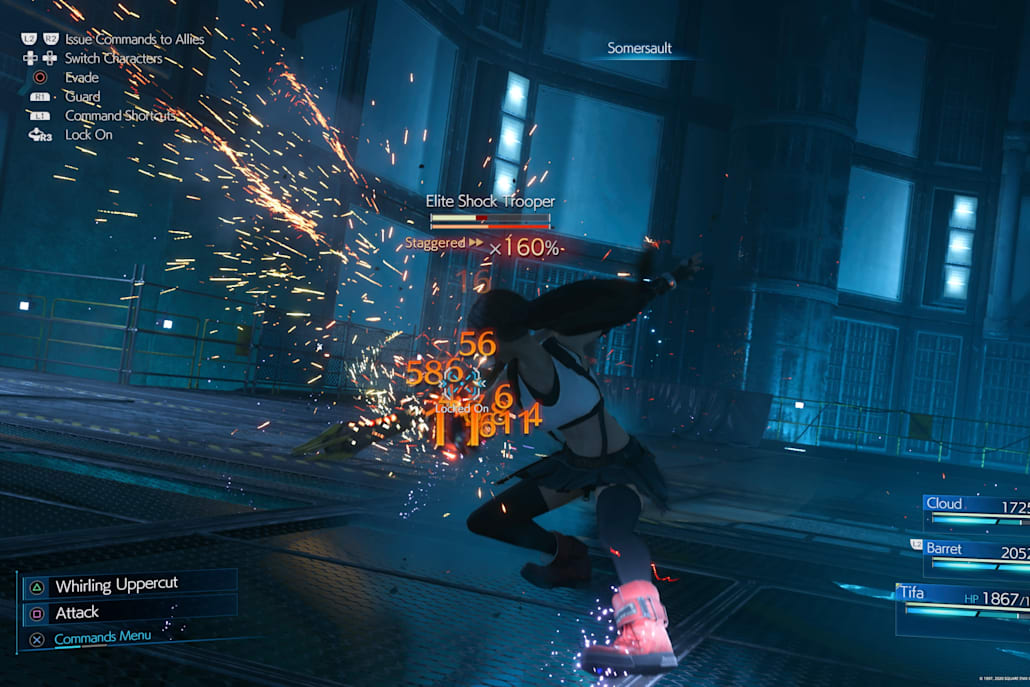 It’s time again to visit the slums of Midgar in order to save the planet from earth decay and ride some chocobos along the way! The new Final Fantasy 7 Remake is a modern reimagining of the 1997 classic RPG by Square Enix. There’s an active battle system, updated visuals, and an expanded story for this PlayStation 4 title. It’s true the combat is more physically taxing than the original, but there are also new features that will help disabled players experience the game.

FF7 Remake is a very different animal than the original. It only took a few buttons to maneuver and play the original, but FF7 Remake is much more involved, requiring the player to press many more buttons on the controller. This is a result of the genre shift between the two games, as the original was a true turn-based RPG, while FF7 Remake is an action game with RPG elements. Players still gain experience points in combat and travel through linear maps, and there’s even a difficulty mode that uses aspects of the turn-based combat from the original (more on that below).

Controls in the original game consisted of X to interact, O to cancel, triangle to access the menu, and the left control stick to move. Occasionally the player would use square for certain minigames, but that’s about it. In FF7 Remake the controls are X to interact, circle to dodge and cancel, triangle for interacting and talking to characters, and square for your basic attack. The directional pad is now essential for switching between characters in combat and also selecting combat commands. The player moves their character with the left control stick and the camera with the right control stick. Inputs of R3 to lock on to enemies and L1 to open command shortcuts are also available but are not required to access the game. There are moments that are worth mentioning, however, where it’s necessary to press hard-to-reach buttons in quick succession. Early on in FF7 Remake, a large number of tutorials appear on screen, and the only way to get rid of them is to press the options button. Disabled gamers with fine-motor impairments often have trouble pressing the options button because of its size, shape, and placement on the controller. For example, I can get by pressing the options button a few times in a session, but after that it gets tiring. The pop-up tutorials seem to fizzle out after the first hour or so, but it still proves a barrier for disabled gamers with fine-motor impairments, especially considering the absence of remappable controls.

Despite the more physically involved combat and controls, FF7 Remake does have a few bypasses and accessible options that make gameplay easier for disabled gamers. There’s a great setting that, when turned on, orients the camera behind the player’s character and follows their movement. This effectively eliminates the right control stick completely so fine-motor impaired gamers only have to focus on manipulating one stick. There was only one difficulty mode in the original game, but FF7 Remake has three different difficulty modes to choose from: easy, normal, and classic. Easy mode lowers the combat difficulty and lets the player focus more on the story. Classic mode is the same except, once turned on, combat resembles the original FF7’s turn-based experience. I say ‘resembles’ because it’s not true turn-based combat where the player and the enemy take turns fighting, usually with one character at a time. Instead, time slows for a while in which the player can select battle commands. There’s even an option in which the game’s combat AI takes over completely, and anytime enemies are nearby, characters will fight automatically. You can customize tactics for each of your characters to obey in this mode, or you can take back control at any time. This mode plays more like Final Fantasy 12’s AI-controlled system than anything in the original FF7. Still, it’s a welcome reprieve from FF7 Remake’s physically demanding combat, as classic mode requires fewer inputs for disabled gamers with fine-motor impairments.

Compared to the original, FF7 Remake has a lot more visually going on as well as mechanically. There are more visual flourishes that accompany attacks and many more labels and icons that fill up parts of the screen. Thankfully, visually impaired gamers do have the choice of turning off some of these HUD icons in the options menu. You can alter the individual sound levels in FF7 Remake including music, dialogue, and sound effects. The dialogue has fewer spelling errors and mistranslations than in the original game. For deaf players there are subtitles available that even take into account party chat and words spoken during combat. Combat subtitles are not always consistent especially if some phrases repeat, but from my experience you can still solidly understand the information the game is conveying. I think it’s worth mentioning that FF7 Remake does a good job subtitling spoken dialogue that is off screen. When a character is speaking off screen the subtitles appear in the far-left corner, separating themselves from the main dialogue and also letting you know who is speaking.

FF7 Remake does not play very much like the original game. The active battle system is much more action oriented, and many more buttons on the controller are required to access the game. Still, gamers with fine-motor impairments have accessible options like the camera orienting feature and the classic difficulty mode. Clear and readable subtitles help deaf players read off-screen dialogue, and gamers with visual impairments have a decent suite of adjustable video settings to tailor to their needs. FF7 Remake is not the most accessible game on shelves, but Square Enix clearly understood gamers are more diverse 20 years after the original FF7’s release, and there’s enough here to help many disabled gamers access the game.