Escape From Doom By Running Smack Into A Mummy 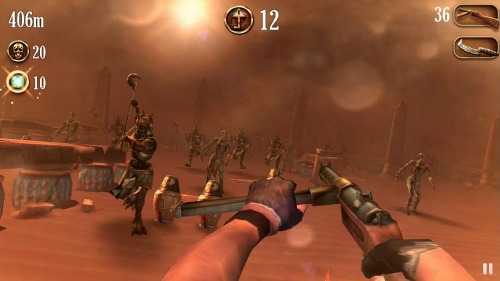 The endless runner is the first person shooter genre of the mobile gaming world. What happens when we combine an endless runner with the FPS genre? We get Escape From Doom by Trigger Happy Games in collaboration with Shoot For The Moon, a game which is now available for $1.99 on iOS.

Evocative of Temple Run, the disturbance of the temple awakens a legion of mummies. The mad dash through the desert outside of the collapsing temple is a scramble of avoiding mummies while hitting urns and treasure chests. Urns yield gems that purchase upgrades and keys that unlock treasure chests housing weapons. When equipped with a gun, crossbow, and other unlockable weapons, limited ammunition is available to take out an unavoidable mummy in the pursuit of a record breaking run.

As per usual with endless runners, repeating the same environment except for the rare moment of running past the previous record high becomes tiresome with upgrades and unlockable weapons varying the gameplay. A big benefit is that one mummy hit does not end the run. Costing $1.99, Escape From Doom balances money spent with the ease of playing the game. Players can tackle the challenges from run 300 meters to kill 10 mummies with the pistol in one run for a slow progression through the weapon and perk upgrades or throw down cash to level up and beat back the mummy horde.

Escape From Doom is a polarizing game based on accessibility. For the deaf and hearing impaired, the instructions are clearly communicated in text with no gameplay impeded by the lack of text for audio cues and ambient noise.

For visual disabilities, the game is largely inaccessible. The sand, urns, columns, mummies and other environmental features are varying shades of yellow and beige. The endless running is based on weaving amongst the mummies who appear out of an ongoing sandy mist that is made worse during periodic sandstorms. Mummies, urns, and treasure chests are often difficult and made even more difficult to see in sandstorms until the last minute. An intriguing blend of gaming genres depends on suddenly appearing enemies and treasures with a gradient color scheme depending more on “Boo!” appearances than player skill at least in the early levels.