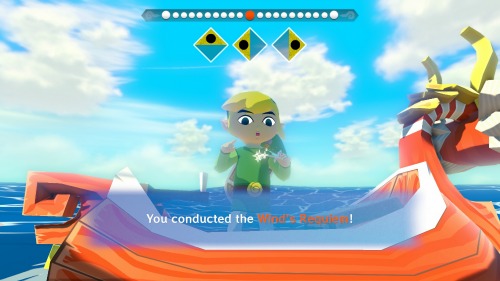 In celebration of the New Year, I wanted to look back on 2013 and highlight my favorite game of the year. I had several options when I sat down to write this. Naughty Dog’s gripping story The Last of Us, the barrier free arcade fighter Injustice: Gods Among Us, and the perpetually barrier free Pokémon Y were just three of my options. But I didn’t choose any of those. I chose a game that resonated with me as a gamer, because it allowed me back into a franchise that I had been cut out of in previous generations. I chose a game that appeals to all audiences, whether adult or child and irrespective of disability. I chose The Legend of Zelda: The Wind Waker HD.

On the surface, my choice may seem illogical because even though Wind Waker HD was barrier free for hearing and sight disabilities, my disability (a fine motor impairment) made all previous attempts at Zelda games difficult. While it is true that Wind Waker HD does feature timing- and precision-based puzzles, they are forgiving enough that they posed no barrier to me in beating the game. For example, even the famed boss battles (which always include some element of timing and accuracy) ranged from downright easy opponents like Armogohma to the very challenging but still beatable final boss fight with Ganondorf in the ruins of old Hyrule castle. Very rarely does a game come along that poses the right amount of challenge for disabled gamers, but The Legend of Zelda: The Wind Waker HD is one of these rare titles.

Even though this game requires a small amount of timing and precision, I still gave it a barrier free rating because I was able to beat it, and my fine motor impairment is fairly severe. This is what a lot of game accessibility advocates don’t understand. It is unfair to judge a game for its accessibility in a vacuum. If you did, no game would be truly accessible. But The Wind Waker HD deserves notice for accessibility because it sets the highest accessibility standard in The Legend of Zelda series, a series which has historically been plagued by barriers. For example, previous Zelda games have only allowed players to save at certain points. But The Wind Waker HD let players save much more often, enabling a save-on-the-fly feature. This made the game much more forgiving, since players didn’t spend nearly as much time retreading the same ground.

While on the note of history, let’s examine other Legend of Zelda titles. While they have always been hard for me, in recent years they have been completely unplayable. The original DS games relied too heavily on stylus control and accuracy to be usable with a fine motor disability. This cut me out of the experiences of Spirit Tracks and Phantom Hour Glass. Similarly, when Nintendo released its next home console title, Zelda Skyward Sword, I was excluded from that experience because of the motion-based control scheme. In fact, even after the release of Wind Waker HD, I was again cut out of the Zelda series (which I grew up playing and have always enjoyed) when A Link Between Worlds proved to be inaccessible. This is the main reason why I am choosing Wind Waker HD as my editor’s choice. Even though it doesn’t have the quality of some of the other games that I could have chosen, it allowed me an experience that I had always loved as a gamer, and which I had not been able to enjoy in many years due to the franchise’s inaccessibility.

For those in doubt, Wind Waker HD still represents a high standard for accessibility, even when compared with games in other franchises. The controls were basically fully remappable, allowing players to assign any item to any action button on the face of the controller. And whereas the Wii U hardware posed a barrier for other games, it actually helped the fine motor accessibility of The Wind Waker HD, with features like its second screen capability and even a streamlined inventory on the Wii U Gamepad.

The reality is, as a hardcore Zelda fan with a fine motor disability, Wind Waker HD may represent the last Zelda I’ll probably be able to play without any help—at least for a while. Thankfully, it’s a title that merits playing and replaying as many times as possible. The visuals are beautiful, the story is quirky but engaging, and it represents a great starting point for anyone who hasn’t played one of gaming’s oldest and most beloved franchises.

Wind Waker HD represents the high point for Zelda accessibility, and it’s my editor’s choice this year because it brought me back into a franchise that I loved so much growing up—and did it with a game that represents perhaps the peak of Zelda gameplay.