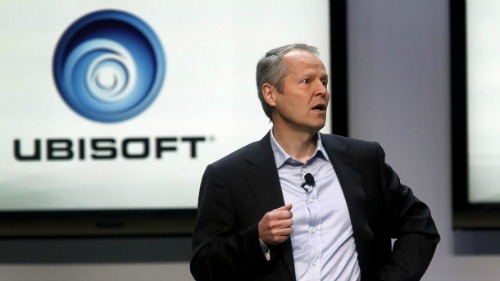 Historically, Ubisoft’s E3 press conferences are full of two things: unintelligible humor and blockbuster games. And while we at DAGERS can’t critique the accessibility of their jokes, we did notice a thing or two about the titles they revealed at this year’s E3 press briefing.

Rocksmith 2014
The briefing opened with Jerry Cantrell, of Alice in Chains’ fame, rocking out on an electric guitar and announcing a new Rocksmith. While they didn’t show any gameplay, there are grounds to believe that this title will be reasonably accessible as far as music and rhythm games go. The reason is that instead of relying on colored buttons, Rocksmith teaches you to play using an actual guitar. As a result, colorblind gamers should have an easier time with this game as opposed to a game like Guitar Hero. There’s not much they can do to make the game accessible for those with fine motor impairments or hearing impairments. But it’s nice to see that at least some disabled gamers will be able to enjoy this game.

Splinter Cell: Blacklist
Viewers got treated to another Splinter Cell: Blacklist demo in which Sam Fisher used his stealth and marksmanship skills to rid the world of several dozen terrorists. The problem was, the video was so fragmented that you couldn’t tell much from this particular clip. But from what we’ve heard so far, Splinter Cell: Blacklist is another first person stealth action game in the Splinter Cell series. The real question is how forgiving the controls and gameplay will be, since in previous games the control scheme was inaccessible. Unfortunately, Ubisoft did little to address the accessibility concerns of this upcoming title.

Rayman Legends
Following Splinter Cell, Ubisoft’s classic platformer showed up—and Rayman Legends finally has a release date: September 3, 2013. While they didn’t debut much gameplay, I have had some hands-on experience with this title, and it is a straight platformer that tends to be more accessible than it appears. The questions will be, how does Ubisoft integrate the Wii U tablet into the control scheme and how will this affect disabled gamers?

The Mighty Quest for Epic Loot
This new IP from Ubisoft was not shown in great detail. But from what was shown, it seems like a reasonable accessible concept. Gamers build up their own castle to protect their loot from other players and then venture out into other players’ castles and try to raid their loot. Ostensibly, it will be always online, but since the game only has a multiplayer function, this is not the kind of thing that it needs to be criticized for from the standpoint of accessibility.

The Crew
The Crew is yet another racing game that focuses heavily on seamless multiplayer elements and therefore will probably be always online. The self-proclaimed “MMOCarPG” allows players to drive all around the US and team up in groups of four (called crews) to complete special challenges. Ubisoft highlighted two features that seemed to make this title highly accessible: (1) There is a high level of car customization, meaning that players should be able to design a car that handles in a way that is easy to compensate for given their disability, and (2) Ubisoft stressed the amount of choice you have in the game. This means that players won’t have to fight with missions they can’t complete, because there will always be something else they can try that may be more accessible.

Watch Dogs
Ubisoft just showed a cinematic trailer for the upcoming title Watch Dogs. But the open world that they are emphasizing as well as the emphasis on stealth and choice of gameplay path seem to indicate that it could be this year’s Dishonored—a game with some accessibility challenges but that has a built-in way to get around them. Beyond recognizing that, we’ll have to wait and see.

Just Dance 2014
Just Dance is inherently inaccessible for me, so I don’t have much experience playing it. I can say that if this game has the hope of being more accessible that its predecessors, it will come down to one issue: how for giving the gameplay is. But, then again, since Ubisoft didn’t actually show us any gameplay, we’ll just have to wait for more information to determine what changes have been made.

Rabbids Invasion: The Interactive TV Show
Rabbids Invasion is not a game per se, but is being billed as an interactive TV show. It’s based on motion control technology, so it’s a fair bet that it will be pretty inaccessible to anyone with mobility or fine motor impairments. As of yet, we don’t know how sound or the ability to see color will impact the ability to participate in the show.

Assassin’s Creed IV: Black Flag
More cinematics were debuted at the Ubisoft press briefing, but virtually no gameplay. However, the game looks to hold true to the Assassin’s Creed formula of free running, sneaking, and fighting. These games have been mixed bags for disabled gamers over the years, so we’ll have to wait until October before we can say definitively whether you can play this game.

Trials Fusion / Trials Frontier
Two new Trials games were debuted at the press conference as well. But since they were only debuted using short cinematics and the smallest amount of gameplay showcasing the mobile game (Trials Frontier), it’s hard to say whether this game or its console big brother will be accessible.

Tom Clancy’s The Division
The Division was probably the single longest demo at the briefing. It looks like a console-based third person shooter MMORPG, which tasks players with aiding in the recovery of the US after a plague has wiped out our entire infrastructure. It seemed as through each of the four players were heavily customized and fulfilled a specific role in the squad. This is all good news for disabled gamers, because it seems like anybody will be able to find a play style that they can use to progress through this game. Take away the fact that it’s an MMORPG, and it still looks like a pretty fun shooter. But since none of the controls or interface were clearly displayed, we’ll have to wait for more information before it becomes clear whether Tom Clancy’s The Division is accessible or not.

Looking back, it’s probably easier to say what we don’t know about the accessibility of Ubisoft’s upcoming titles than what we do know. But it does seem clear that some games will be reasonably accessible, while others will have some severe barriers.