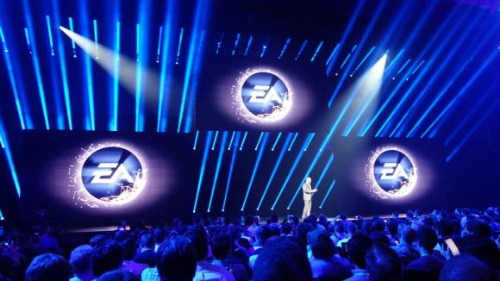 EA was the second company to hold a major press conference on Mandy, and they debuted an impressive lineup of games for everyone from hard core shooter fans to people to people looking for an enjoyable romp through the garden—all types of gamers were represented. From what we could see on Monday, disabled gamers will be able to enjoy many of the titles that EA discussed. Here’s the rundown.

Plants vs. Zombies: Garden Warfare
The first game that was revealed was Popcap’s whimsical third person shooter. A far cry from the puzzle based mechanics of the original PvZ, Garden Warfare puts players in the action, controlling several of the plants from the beloved puzzle game. From an accessibility standpoint, this actually may end up being the most accessible Plants vs. Zombies yet, since it takes away many of the timed elements which made the original game so difficult for disabled gamers. Furthermore, it seems to add in a class-based system which allows players to control different types of plants with different abilities as they rampage through various battlefields waging war with their undead foe. And it currently features an over-the-top, cartoony art style that should be easy for visually impaired gamers to deal with.

Titanfall
Titanfall was covered both at the end of the Microsoft press conference and at EA’s press conference. Very little is known about it, but the idea of the game looks to be intrinsically more accessible than standard first person shooters. Having the option to play on the ground as a quick moving pilot or as a heavy-hitting, mech-suited soldier should give disabled players more flexibility than they would find in other first person titles. Combine that with the apparently customizable nature of the titans, and the game seems like it has the kind of idea that could include almost any player regardless of their disability.

Star Wars: Battlefront
We were only treated to a thirty second cinematic teaser of the new DICE game, but historically Battlefront has been reasonably accessible, and hopefully DICE will keep that tradition up.

Need for Speed: Rivals
There is only so much you can do to make racing games accessible, and none these features were detailed in the brief demo at the press conference. But as the drop-in/drop-out nature of the game seems to indicate, Rivals may always need an internet connection even to play single player games, since the game highlights the ability for players to interact with each other on the fly by chasing racers when playing as a cop or by escaping other players who are playing as the police. If that is the case, it will be intrinsically less accessible than many of its predecessors.

Dragon Age: Inquisition
Again here, we have a scanty demo that included more cinematics than game play information. But EA has set a marginally accessible precedent with other Dragon Age games. So we’ll have to wait to see on which side of the line this game falls.

EA Sports Block
By far, the largest block of time was devoted to the EA Sports lineup. Unfortunately there’s not much to say about these from an accessibility standpoint. EA went on to highlight its technological improvements in four franchises: NBA Live 14, Madden 14, FIFA 14, and EA MMA. Although the technical advances were different, the end result was the same. Each of these sports games seeks to be the most realistic in its genre. The problem with realistic sports games is that they can be incredibly hard to control and compensate for if a player has a disability. However, most of these games usually include at least one or two modes that are completely accessible for disabled gamers. We’ll just have to wait and see.

Battlefield 4
The longest single demo at the press conference was devoted to none other than Battlefield 4. Audience members were treated to a sixty-four person live multiplayer match that showcased all the game’s intense action and beautiful visuals. However, at this point there appears to be little practical difference between Battlefield 3 and Battlefield 4 that would affect its accessibility. It is unfortunate to see the same team color-coding system that makes the multiplayer virtually unplayable for the colorblind. Hopefully EA will take a hint from the recent SimCity and include at least one colorblind mode so that players with visual disabilities can enjoy as much of the game as possible.

Mirror’s Edge 2
The last bomb that EA dropped on audience members was the return of faith in Mirror’s Edge 2. Once again, this was a trailer with more cinematics than gameplay, so we’ll just have to wait a little longer to see if this new adventure will be accessible.

Coming out of E3, EA seems to have an impressive lineup of upcoming games. Some of them are clearly accessible, and others—we’ll just have to wait and see.