When EA’s press conference concluded some viewers might be focusing on the unfortunate choice to spend too much time talking about their sports game lineup, the Electronic Arts media briefing did give disabled gamers some valuable information. The firsts game EA covered was the new Mass Effect, however, all we got was a name, so there is little we can say for certain about Mass Effect: Andromeda.

The first real information came about the reboot of the popular racing franchise, Need for Speed. One of the games main selling features during the on stage demo was the extensive car customization. This is always a good sign for disabled gamers since it will allow you to create cars that handle in ways that are less affected by physical disabilities. The only drawback is that it seems to be hyper-technical which may limit some more casual gamers from fully enjoying the experience. However, we do know that the new Need for Speed will require an internet connection, which we know can be a barrier for some disabled gamers. There seems to more of an emphasis on narrative in this Need for Speed than most other racing games which means subtitles will be imperative to ensure auditory accessibility. We’ll find out more when the game releases November 3 of this year. Star Wars the Old Republic, has been touted by DAGERS as one of the most accessible MMORPGs on the market, and it is getting a new expansion. While we only got a brief glimpse at a cinematic trailer, we do know “Knights of a Fallen Empire” will be “free to all subscribers” which unfortunately probably means you will need to have a premium subscription in order to play the new content for “free.” EA also unveiled a new collectable card game based in the Star Wars universe. Like the Elder Scrolls: Legends from last night’s briefing, little is known right now, but most people will probably compare Star Wars: Galaxy of Heroes to the established trading card games Magic: Duals of the Planeswalkers and Hearthstone.

EA then went on to discuss a greater push to include more people in open betas for upcoming games. This is a good thing for disabled gamers as once again it gives them more opportunities to determine the accessibility of these titles before investing any money at release.

One of the few indie games that EA highlighted was a charming platformer called Unraveled. In this title players play as the adorably Yarnie who uses the yarn he is made up of to solve puzzles as he slowly makes his way throughout the world. Little is known about the game except for its seemingly accessibly art style and physics based game play. The developer can either make this  game incredibly accessible or completely exclusive of disabled gamers depending on the choices they make regarding control customization and number and frequency of save points. We’ll have to see when the game releases. 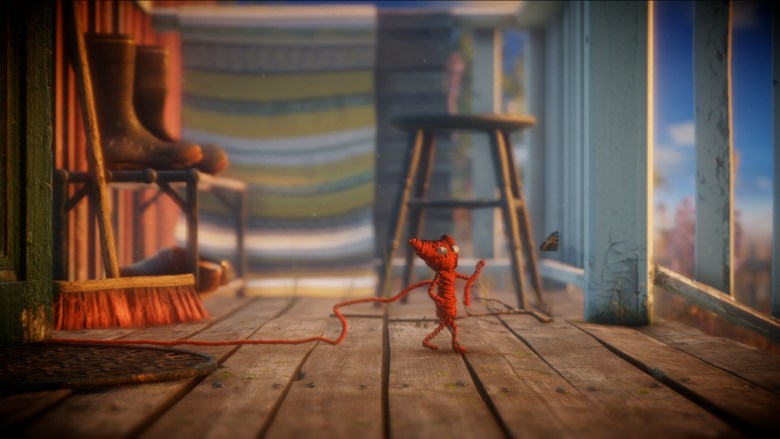 Plants vs Zombies: Garden Warfare is getting a well-earned  sequel which is executed with the same visually accessible art style and minimal reliance on sound to communicate dialog as we saw in the first one. This game will have several new classes including imps, Super Brains, and Captain Deathbeard, as well as others that weren’t revealed in the briefing. Everything seems to point toward more content and more flexibility when compared to the first PZ:GW. For example this game will not only offer online multiplayer but will also have singleplayer and couch co-op, the lack of which was one of the few drawbacks of its predecessor. We’ll have to wait and see if this really pans out when the game releases in the Spring of 2016.

I cannot be the only one who thinks EA spent an uncomfortable amount of time discussing the various new additions to their sports catalogue coming out this year. The problem was not so much the games as what they didn’t show, because they didn’t show much gameplay, there is very little that DAGERs can tell about the accessibility of games like NHL 16, FIFA 16, and Madden 16.

EA closed the conference with an extended look at Star Wars Battlefront. While none of the mechanics were specifically highlighted, the sheer amount of flexibility seen in the demo seems to indicate that Star Wars Battlefront will provide a definitive Star Wars experience that is adaptable to any player’s abilities regardless of physical condition. In the extended demo, players saw everything from foot soldiers with various weapon loadouts to dog-fighting Tie Fighters and X-Wings over the heads of hero units like Darth Vader and Luke Skywalker, all on the same map which seems to communicate that Battlefront will be a massive game with something to offer for every player.