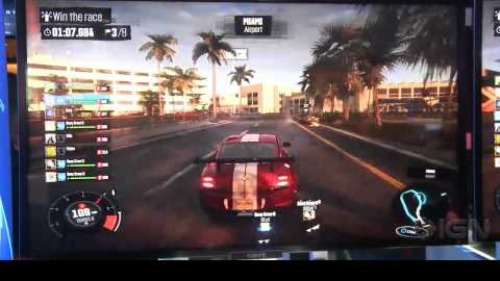 Ubisoft’s press conference gave us a slate of some very solid titles to look forward to this year. From the standpoint of accessibility only two of them are problematic, and the rest seem like they will be accessible for at least some disabled gamers.

They started the press conference off with a beautiful cinematic FarCry 4 trailer. We were introduced to the villain and got to see a player liberate a Himalayan fortress from a band of mercenaries using a gyrocopter and a herd of enraged elephants. There wasn’t much unique about the FarCry 4 gameplay reveal that we didn’t see in its predecessors, but the fact that Ubisoft is sticking with a formula that is historically accessible seems to be good news for disabled gamers.

Just Dance Now and Shape Up are non-starters for most disabled gamers because of their reliance on movement, their ability to see color, and the ability to hear. However, the idea of exercise being turned into games is intriguing if they can make it accessible for wheelchair bound gamers like me. I am in the midst of trying to lose weight, and having a game to help me exercise sounds like it would be a good way to help burn some calories.

Tom Clancy’s The Division also made an appearance at the Ubisoft press conference, but only in the form of a time lapse cinematic trailer showing how dire the world has become.

After that came Ubisoft’s new racing IP, The Crew, which boasts of making the entire continental US playable. Although racing games are historically less accessible, the amount of content their pushing in The Crew seems to indicate that this may be a more accessible title then other racing games on the market. Combine that with the existence of an open beta that is coming, and disabled gamers might have something to look forward to. The big questions still to be answered are whether or not a player can play by themselves, and whether the game requires an internet connection. These two questions will have a massive impact on the accessibility of The Crew.

One of Ubisoft’s bigger gameplay demos was for Assassin’s Creed Unity. The game didn’t feature any new or unique gameplay, and rather focused on showing the new setting, Paris, during the French Revolution. It doesn’t seem to be any more or less accessible then other games in the franchise, but frankly, my enthusiasm for the series is quickly cooling because they seem to be rushing titles out and the experience seems to suffer for all gamers, not just disabled ones.

Valiant Hearts: The Great War was a UbiArts Studio game that debuted at this year’s E3 press conference, but since all that it showed was a cinematic, all we know is that the game follows four characters through the horrors of the first world war in a way that only Ubisoft can execute. From what we saw, the game will probably feature beautiful easy to see visuals, due to the use of the UbiArt Framework.

Finally the press conference ended with an extended demo of Rainbow Six Siege. This first person squad-based shooter gives players the opportunity in multiplayer to divide up into two teams, a SWAT team and a team of bad guys holding a hostage. The SWAT team’s goal is more offensive while trying to save the hostage, and the enemy teams goals are more defensive, trying to prevent the hostage from being rescued until a timer runs out. This may only be one of several modes in the new Rainbow Six, but dividing players into two teams with different goals and play styles offers disabled gamers more options to fit their ability.

Ubisoft did a better job at this press conference then any I can remember, they didn’t distract us with quirky jokes that nobody understood, and focused on the one thing they do well: games. On the whole, disabled gamers still have some questions, but they should be excited about the future of gaming that Ubisoft is promising us.