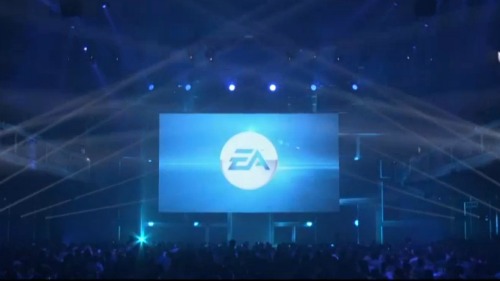 The Electronic Arts Press Conference struck me as a little odd this year. Instead of focusing on gameplay, EA showed a lot of interesting developer tidbits, and conceptual prototype footage to show what future games would be like, as a result, there’s not much we can say in the way of accessibility, but here’s what we came up with based on their hour long press conference:

EA tried to start the conference off big by teasing players with more news about Star Wars Battlefront, the problem from the standpoint of accessibility is they didn’t actually show gameplay, they just showed a developer diary, in which the team at DICE talked about how they went down to Lucas Arts and got original scans of props to put into the game. All we can say at this point is that historically, the Battlefront franchise has been a forgiving First Person Shooter, that allows for multiple roles that may fit the needs of some disable gamers.

Next up viewers were treated to actual gameplay of Dragon Age Inquisition, and while it was cut together and not really clear, it was possible to see features like automatic targeting, and various classes that players can use, which seemed to indicate that this game will be the kind of forgiving RPG that Dragon Age is historically known for.

Bioware took the stage next with a develop diary related to a new Mass Effect game and an unnamed new IP, unfortunately however, we didn’t even get any in engine footage for the new Mass Effect, so there’s nothing for disabled gamers to judge there. We were only treated to a few shots of season’s changing when they talked about their new mystery game.

Unfortunately Criterion did the same thing with their new unnamed IP. They even admitted that it was too early in the development process to be talking about the game, which seems to indicate that they’re not even sure what shape the game will take in the future. All that we do know is that it’s a vehicle based game, presumably racing, in which players pilot everything from wing suits and parachutes to helicopters and speedboats. This number of vehicles seems to indicate a high level of player choice, which means the game should be more accessible for disabled gamers.

Mirror’s Edge 2 was one of the big reveals at last years press conference, and EA brought us more information this year, however they did so in the form of heavily edited footage inside a developer diary. Unfortunately, there’s no indication as to how forgiving the game will be, or if there’s any way to make the game more accessible.

Because The Sims has always been a relatively accessible franchise, the fact that they didn’t show much gameplay for The Sims 4 shouldn’t discourage players, since as long as they’re sticking to their tried and true formula, the game should be playable for most gamers. The one feature that they did highlight was the new emotion system, which promises to add new levels of quirkiness to each Sim that players create.

One of the unexpected appearances was a new MOBA by the name of Dawngate, but again here, we had so little gameplay mixed in with the developers promising that it will break the meta, that it really is impossible to judge accessibility. We at DAGERS will keep our eyes open as new details about this game emerge, or if you’re interested, there’s a free open beta where players can test an unfinished version of the game for themselves and offer feedback on how to make the game accessible.

The trend of not showing gameplay continued throughout the EA Sports trailers, while they did show in engine footage, it was so heavily cut for NHL 15, NFL 15, PGA Tour 15 and FIFA 15 that no information can be gleaned about the accessibility of the franchise. The one sports game in which they did show extensive uncut gameplay is UFC 15, the franchise has now added the legendary Bruce Lee to their roster, but with few changes to the game play actually talked about, the reality is this UFC will probably be as technically difficult, and therefore probably as inaccessible as its predecessors.

The only actual extensive demo that we were allowed to see at the EA Press Conference was one for Battlefield: Hardline. This first person shooter takes the old formula out of the military setting, and puts it into a cops and robbers type environment. The frantic gameplay featured dozens of weapons, and various tasks that players could fulfill which seem to indicate a fair amount of player choice. That in itself is good news for disabled gamers, but better news is an open beta coming soon that will allow disabled players to try the game for themselves, and even offer feedback to the developers to make the game more accessible.

In conclusion, EA didn’t do much for disabled gamers this year, they did show us what they had going on in the pipeline, but they didn’t do so in a way that we could judge accessibility.