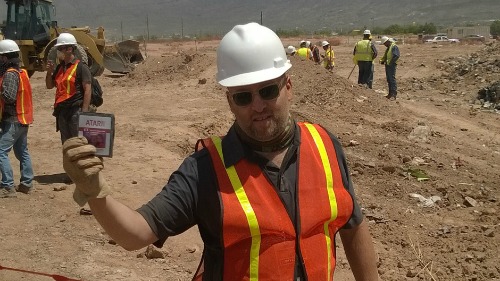 In December 2013, Xbox Entertainment Studios and Fuel Entertainment announced a partnership to produce a documentary about the recovery of Atari’s long buried cache of E.T. the Extra-Terrestrial game cartridges. On April 26, 2014 the excavation uncovered the buried Atari games and hardware at the Alamogordo Landfill in New Mexico.

The recovery began with an Atari 2600 joystick and proceeded with an E.T. the Extra-Terrestrial cartridge, a box and an instruction manual. Other boxes and cartridges include Centipede, Space Invaders, and Asteroids. The findings in the landfill corroborates the story that Atari dumped excess stock in a New Mexico landfill when faced with financial collapse following the poor reception of E.T. the Extra-Terrestrial.

Atari: Game Over, the documentary’s working title, will air exclusively on the Xbox 360 and Xbox One sometime in 2014. Fuel Entertainment and Joe Lewandowski, a local garbage contractor, acquired the exclusive rights to excavate the Alamogordo landfill.

Atari: Game Over is only one of a number of original video content that Xbox Entertainment Studios is bringing via Xbox: Xbox Originals. Disabled gamers will await the release of the first content in June 2014 to assess how the content compares to broadcast television regarding accessibility features such as closed captions and video description.