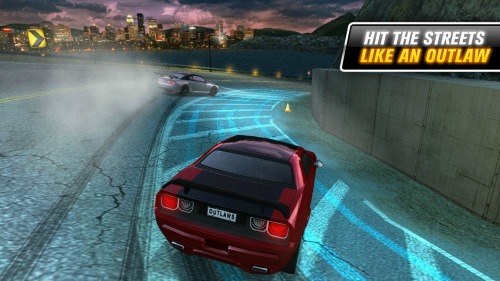 Rather than the focus on racing itself the game focuses competition on point accumulation and achievements acquired with stylish drifting. Various locales provide the backdrop for drifting through hairpin turns.

For $0.99 the game comes with single and multiplayer modes as well as fairly extensive upgrade and settings options. Additionally, an in-game soundtrack can be substituted with a player’s personal music list. Single player is moving from one track to the next, battle mode is a tournament style competition, and multiplayer is a head to head battle online or on a local connection.

In-game cash for upgrades and car customization is earned with point totals from races that climb due to drifting bonuses than for finishing the race quickly. In fact, drifting combination points are negated for driving off track and hitting sidewalls. Single player progression from one track to the next requires certain achievements from point goals to instructions for completing the race with no damage. Micro-transactions are available for quickly stockpiling in-game cash, otherwise the game plays as many mobile games requiring grinding with multiple playthroughs per level for the needed points and achievements to progress.

Drift Mania: Street Outlaws offers a surprising amount of options for tailoring the gameplay to each gamer’s needs. While in-game music plays, all gaming instruction is clearly communicated by text with music available for ambience. For visual disabilities the game includes night races but the cars are distinct against the road with features such as ample street lights and highlighted areas for drifting bonuses in a clear, bright blue.

For those with fine motor control disabilities there are settings for difficulty – easy, medium, or hard – and 5 different sensitivity options for steering. Steering the car has 2 controller options. All controllers utilize a handbrake that requires a screen touch to activate. Controller options are tilting the screen for steering and using the touchscreen for the handbrake. Or a virtual wheel at the bottom left of the screen that is steered with one hand while the other activates the handbrake.