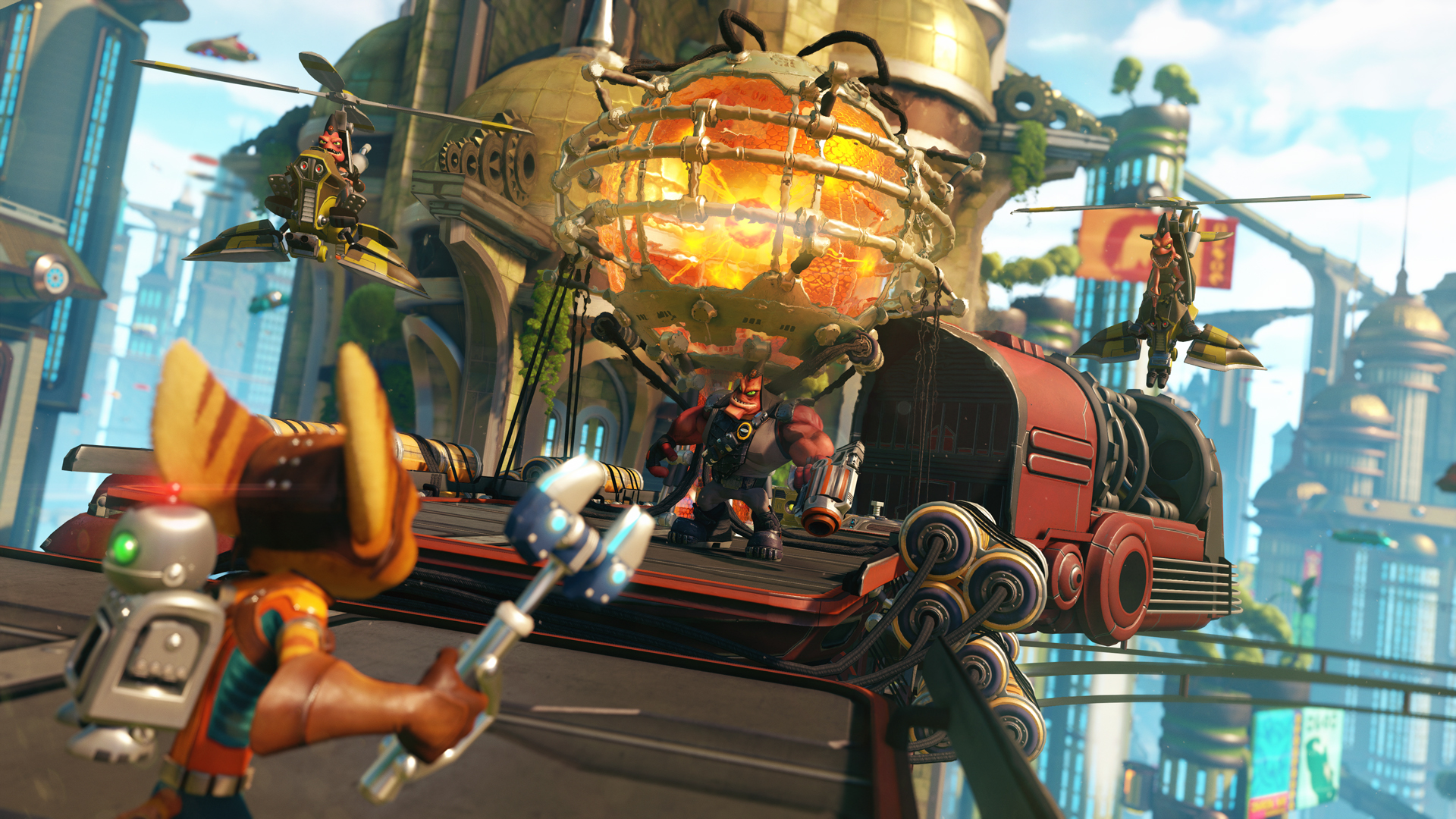 Platformers in the vein of Crash Bandicoot and Bandjo Kazooie used to be a staple within the game industry but in recent years have fallen off in popularity. Ratchet and Clank for the PS4 takes gamers back to the heyday of third person platformers like these while adding a bit of a fresh spin on the series. The game is incredibly fun and well polished. For gamers with disabilities, it offers an experience that will be accessible for many but probably not for the fine motor impaired.
This inaccessibility is due to the fact that this title follows the precedent set by the other games in the Ratchet and Clank franchise. Ratchet and Clank for the PS4 requires precise timing and quick reflexes whether it’s hoverboard races on Rilgar or the ubiquitous swinghshot courses. Players with fine motor disabilities will have a hard time managing this game especially due to its lack of adequate controller customization. It must be stated that there is an option to go through the PS4 hardware and rearrange the controller manually but then you run the risk of command prompts in game not lining up with actual buttons. Furthermore in my own personal experience I find it very annoying when I change the basic button setup around to accommodate a single game then forget to switch it back when I’m playing a more accessible title but this feature needs to be mentioned as an option for Ratchet and Clank. Thankfully the game is both very forgiving and very flexible which saves it from a completely inaccessible rating for the fine motor impaired. Whether it’s picking the order in which Ratchet will accomplish missions or upgrading weapons to compensate for lack of accuracy. There is enough flexibility in this title to reward players who are willing to slog through the more inaccessible parts in order to find something they can do and enjoy.

Thankfully the situation is much better for the games visual accessibility. Nothing in Ratchet and Clank for the PS4 seems to rely on fine detail or the ability to see color. This is because of the games signature and overstated art style along with liberal use of unique shapes to differentiate items. For example; one of the touch stones of the Ratchet and Clank series is the weapons collecting and upgrading system which gives players a myriad of customizable ways of dismembering their enemies. Take for example the groovitron which launches a disco ball that distracts enemies by making them dance thereby making them easier to kill. This type of crazy aesthetic means that players will have no problem differentiating between the different types of weapons and their effects.

The case is very similar for players with hearing disabilities. Although my fine motor disabilities got in the way of me experiencing the entire game I can tell that the story is accessible thanks to the adequate subtitles that are both easy to implement and highly legible. If memory serves correctly, subtitles were on at the very beginning which means that players with hearing disabilities won’t have to worry about missing the opening dialogue featuring Captain Qwark. Furthermore, in my playing of the game I did not run into any sound cues or things of that nature that communicate vital information through sound. This means that regardless of a hearing impairment players will be able to enjoy all the fun dialogue and crazy characters in the Ratchet and Clank universe.

On the whole, Ratchet and Clank for the PS4 was surprisingly accessible. While probably not the game for players with moderate to severe fine motor disabilities this has more to do with the inherent nature of the series and less to do with active choices by Insomniac games. However if players are either hearing impaired or visually impaired I feel no compunction about giving Ratchet and Clank for the PS4 my whole hearted recommendation. For many older gamers it will be a trip down memory lane as it offers an old school third person platformer experience with the benefit of cutting edge PS4 technology.