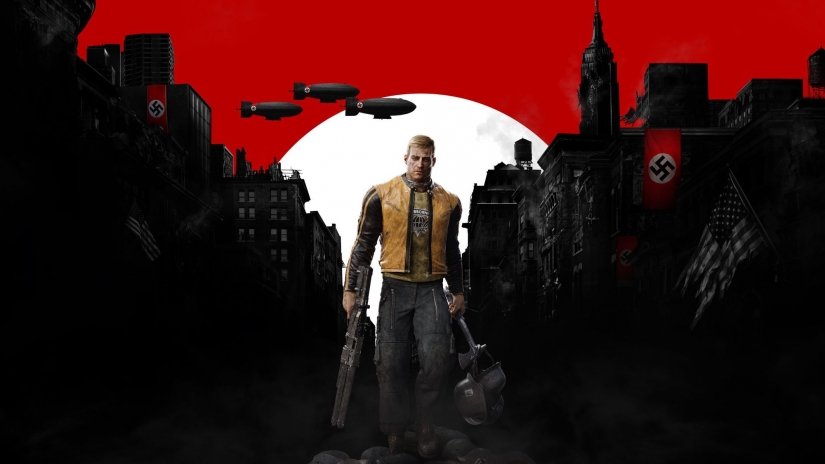 Full disclosure: I’m not very good at first-person shooters and I usually don’t like them because the shooting mechanics start getting repetitive fast in my experience. However, Wolfenstein II: The New Colossus was an exhilarating ride and I honestly had a blast playing it. Taking on waves of Nazis with over-the-top weapons was a lot of fun and I could actually play this shooter with ease. Wolfenstein II is a first-person shooter developed by MachineGames and published by Bethesda. You’ll play as B.J. Blazkowicz, a member of the resistance bent on killing Nazis and taking back America. The game takes place in an alternate history 1961, where Germany won World War II. I can’t speak for the console versions, but the PC version I’m reviewing had plenty of accessibility options for disabled gamers.

Wolfenstein II has fully customizable controls on the PC. Every action, including jump, throw-grenade, fire-right-weapon, and melee can be remapped to the keyboard or even the mouse buttons. The mouse sensitivity can be altered for the camera controls and there are certain toggle features you can turn on for buttons like sprint. You can turn on aim assist to direct your firing closer to enemies with less effort. It’s not a perfect function, as it doesn’t necessarily lock on to enemies, but it does help drift your bullets close to targets. There’s controller support available, which is good because playing with just a mouse isn’t really an option. I usually play with a game controller on the PC, especially with first-person shooters. Wolfenstein II’s controller mechanics work pretty smoothly, and I didn’t notice any bugs or delays when pressing buttons. Wolfenstein II plays like a run-&-gun shooter, so you are often ridiculously overpowered. You are able to duel wield machine guns and carry hilariously powerful weapons like the laser gun, which let you take down enemies very quickly. Still, despite having these weapons and all the accessibility options, the game can be very fast-paced and you can often be overwhelmed by large amounts of Nazi soldiers. Enemies don’t tend to respawn, which is nice, but when they get up close they can be more deadly. When that happens, you’re encouraged to use melee weapons (like the battle axe) otherwise the Nazis may take your health down fairly quickly. That’s why I recommend disabled gamers with fine motor skill impairments play Wolfenstein II on the easiest difficulty. There are seven difficulty modes to choose from and they are all labeled with campy titles appropriate to the Tarentino-esque story. Though they basically act as the typical game difficulties from very easy to extremely difficult. Very easy mode gives you lots of health and armor. I often have trouble with first-person shooters because of how fast-paced they are, but also they tend to be less accessible than others genres. Wolfenstein II’s gameplay is very accessible and as long as you play on very easy mode, I don’t see many problems for gamers with fine motor skill impairments.

There’s one last thing I want to mention about the gameplay of Wolfenstein II for personal reasons, but also because I think many disabled gamers will be interested to know this information. I’m putting a warning here because there may be minor spoilers ahead. Near the beginning of the game your character, B.J. Blazkowicz, is severely injured from a bomb blast and is confined to a wheelchair. Now most of the time when a game does this, it’s simply a plot device to keep the player from getting to a certain area or some kind of adversity for the character to get over in cut-scenes only. Not in Wolfenstein II. You can be a badass in a wheelchair! B.J. has to fight (guns blazing) and even maneuver an entire level in a wheelchair. This was such an awesome moment to play. It was great just because I got to play as someone in a wheelchair, like myself, but also because I have never seen a game do something like that before. Maybe in small doses it has been done, but not while keeping your character as strong as the hero he is supposed to be. No, you can’t play the whole game like this I’m afraid, but it actually lasts a few hours in this state and that’s kind of awesome.

Moving on to the visual side of things, there are many accessibility options available for gamers with visual impairments. There’s a brightness slider you can raise or lower in the options menu and you can alter the resolution to put the game in windowed mode if you like. I took advantage of the windowed mode, so it’s a much appreciated feature. I was very impressed to find that Wolfenstein II had a separate Colorblind mode you can turn on in the options menu, changing certain colors to make colorblind players have an easier time. You can also turn the HUD display completely off if the screen was too cluttered for your liking. For gamers with hearing impairments, Wolfenstein II has subtitles throughout the game, including background chatter. The only small gripe I had was that the subtitles are a little too small. Deaf players just may have some trouble reading them. The soundtrack is seriously intense. The music can go from serious orchestral sounds that set the scene to hard rock music that pumps you up for the next battle. Still, none of it is technically necessary for deaf players to get through a level.

This game seriously restored my faith in first-person shooters. More often than not, I assume these type of games don’t have anything to offer me that I haven’t seen before, but that’s before I played Wolfenstein II: The New Colossus. It brought me back to when I played old N64 shooters, where I felt empowered. I was empowered not only by the crazy weaponry, but by allowing me to kick some serious butt as an actual disabled character within the game. It’s an incredible feeling taking down the Third Reich in a wheelchair and I hope the developers understand what they did for disabled gamers. Wolfenstein II has remappable combat controls so gamers with fine motor skill impairments will have a fairly easy time. There may be a chance gamers with hearing impairments could lose something when it comes to the game’s presentation. However, it makes up for it with a crazy cast of characters and stylized combat. One thing is for sure, any disabled gamer in a wheelchair will want to experience what Wolfenstein II has to offer.