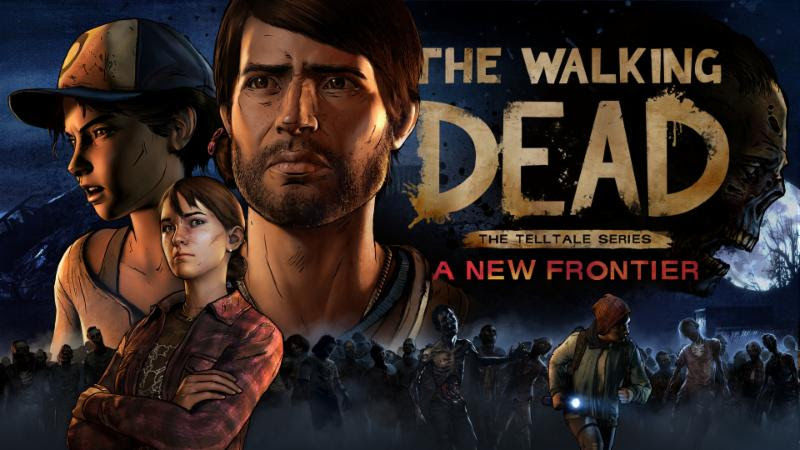 Clementine is back! She has become a hardened warrior, ready to kill more zombies than ever before. The Walking Dead: A New Frontier plays a little differently than the other games in The Walking Dead series. In the first game you played as a character named Lee Everett, in the second game you played as the lovable Clementine, but in New Frontier you will play as two characters. Clementine and a new character named Javier. If you’re not familiar with the series, they are episodic games that mainly focus on narrative, decision-making, and quick-time events. Ask anyone and they will tell you I’m a huge Walking Dead fan. The first game in the series is one of my favorite games of all time. Not only are the Walking Dead games accessible to most disabled gamers, but the games have universal appeal for those who don’t usually play video games.

New Frontier has definitely improved on its accessibility features since the last two games were released. Admittedly, New Frontier doesn’t have customizable control options, but The Walking Dead games have always had very simple controls. You move your character with the left control stick and aim the camera with the right. To interact with objects or people you press the X button. For dialogue choices and quick-time events you press one of the four digital action buttons. Quick-time events are notoriously challenging for disabled gamers because they require timing, precision, and sometimes repeated motion. However, New Frontier added something really helpful for dealing with quick-time events. Interestingly enough, now during these events none of the prompted buttons are required to complete the action. What this means is any of the buttons on the controller or even just movement from the left control stick will perform the intended action on screen. For instance, during a scene where walkers were attacking the game prompted me to press the square button. I literally moved left with the control stick and the game reacted as if I pressed square. This is a huge step up in accessibility options. Whether or not this was intentional or a possible bug is unclear, but one thing is certain. This feature makes action scenes a lot less stressful for disabled gamers with fine motor skill impairments. What stops me from giving this a completely “Barrier Free” rating is the fact that during quick-time events, there are still some moments that require you to quickly aim the right control stick and press buttons repeatedly.

For gamers with hearing impairments there are subtitles. A new feature New Frontier brought to this game was the option to increase or decrease the size of the subtitles. For example these are the sizes you can choose from: small, medium, and large. You can also raise and lower the master volume in the options menu or the music volume separately to fit your preference. Although the soundtrack is nice, hearing it is not required to enjoy the game. On the visual side of things New Frontier offers a brightness scale for the entire HUD you can change. Going back to the subtitles for a moment, the last two games had a strange feature where each character’s subtitles were distinguished by different colors. New Frontier changed it so that all subtitles are now a plain white regardless of the character. Whether or not this is an improvement is debatable, but it did seem like this was there attempt to have colorblind players have less confusion when reading the dialogue.

It’s truly awesome to see the character of Clementine become older and a more independent person in The Walking Dead: A New Frontier. I’ll admit that I wished they would have concentrated more on Clementine than the other new character Javier. Him being a character with no connection to the last two games, I thought it was an odd choice to have him be the focus this time around. New Frontier is a solid entry in the series that improved its accessibility for disabled gamers with fine motor skill impairments by giving the player more freedom during quick-time events. By giving you the option to increase the size of the subtitles, New Frontier helps both players with visual impairments and disabled gamers with hearing impairments.