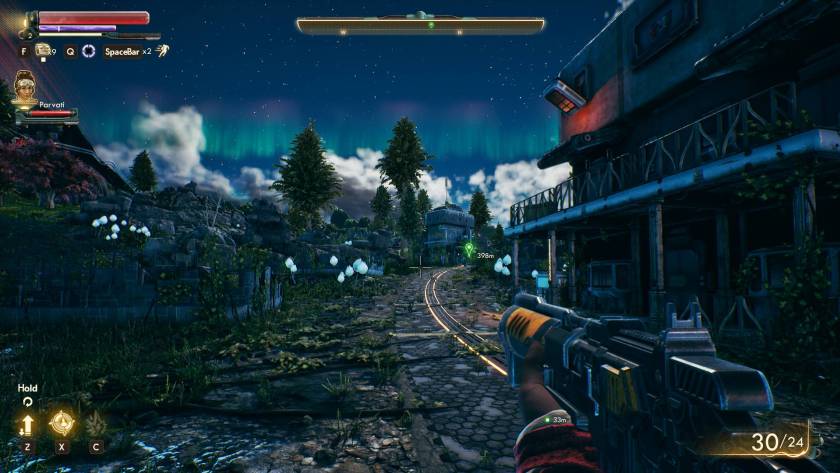 The Outer Worlds is the latest offering from California-based developer Obsidian Entertainment. This company is best known for its work on role-playing games like Pillars of Eternity, but they are primarily associated with their work on Fallout: New Vegas.  While similarities between the two are sometimes obvious, The Outer Worlds manages to find its own identity, while also being quite possibly the most entertaining and accessible RPG I’ve ever played.  The story in The Outer Worlds is set far in the future in an alternate history where President William Mckinley was never assassinated, thus allowing big corporations to prosper and effectively become the government on the colony in which the game takes place. The game opens with the player being awakened from cryogenic stasis on a colony ship sent from Earth by a scientist known as Dr. Phineas Welles. The scientist reveals that he used the last of his supplies to wake you and that the ship’s engines are failing and it has been thrown off course. He jettisons the player to the planet below in hopes that he or she will be able to find the supplies necessary to wake the remaining colonists. It is before being jettisoned that the player can choose gender, physical appearance, weapon proficiencies and other traits commonly associated with this type of RPG. My only gripe with the story is that the historical aspect involving Mckinley is never truly explored.

Players with motor-function impairments should have a barrier-free experience here. This game has a Story Mode difficulty, which simplifies combat and is built for those who don’t excel at this facet of the game. The folks at Obsidian have not only included the rare Legacy button layout and three other pre-sets, but they’ve gone the extra mile to include an aim-assist feature that stays with your target even when they’re on the move. Iron sights are available but not required, as even when firing without them, shots always hit their mark, This eliminates the frustration of having to hold an aim button to be effective. As if the gunplay weren’t already fantastic enough, your companions are competent and they will easily take care of any enemies you don’t, a slow-motion ability is included for easy acquisition of weak-spots. I haven’t seen shooting mechanics this disability-conscious since the original Bioshock in 2007. If you aren’t a fighter, you can talk your way out of most fights if enough points are invested into persuasion or intimidation, including the finale.  The Outer Worlds plays like a more streamlined version of Fallout, the tedium of scrounging for specific armor parts is now eliminated in favor of an item called Armor Parts that work universally across all types of armor and can be applied to increase armor rating at any workbench found in the game world. Weapon parts can also be used in the same manner to increase weapon damage, both types of parts can also be acquired by breaking down unwanted weapons or armor. This simplified approach is carried over to the inventory system as well. Unlike Fallout where one can often carry four different types of ammo(a different type for each gun in their inventory) The Outer Worlds rectifies this by putting each weapon into one of three categories, light weapons(pistols, shotguns, rifles, assault rifles) heavy weapons(rocket launchers, heavy machine guns, etc.) and energy weapons(plasma rifles, ray guns, etc) any weapon acquired uses one of these three. Moreover, there are no special ammo types, and ammo doesn’t take up inventory space, avoiding clutter, and giving disabled gamers less to keep track of, and less time navigating menus. Since ammo doesn’t use inventory space, the player can carry unlimited quantities so you’ll never find yourself unable to use a certain weapon.   The developers take this farther by making it so you only need to equip weapons and armor for companions, and not ammo. Travel is not tedious either since one can fast-travel to any previously-discovered settlement. Saves are also permitted at any time and eliminate repetition as opposed to pre-determined points. For players of the pc version: if the game is purchased on Steam and you wish to use a controller, both the PS4 and Xbox One gamepads are compatible, however on the Epic Store, only Xbox works. I cannot penalize the game for this as it isn’t a mistake by the team behind the game, but a result of where the game is purchased from. 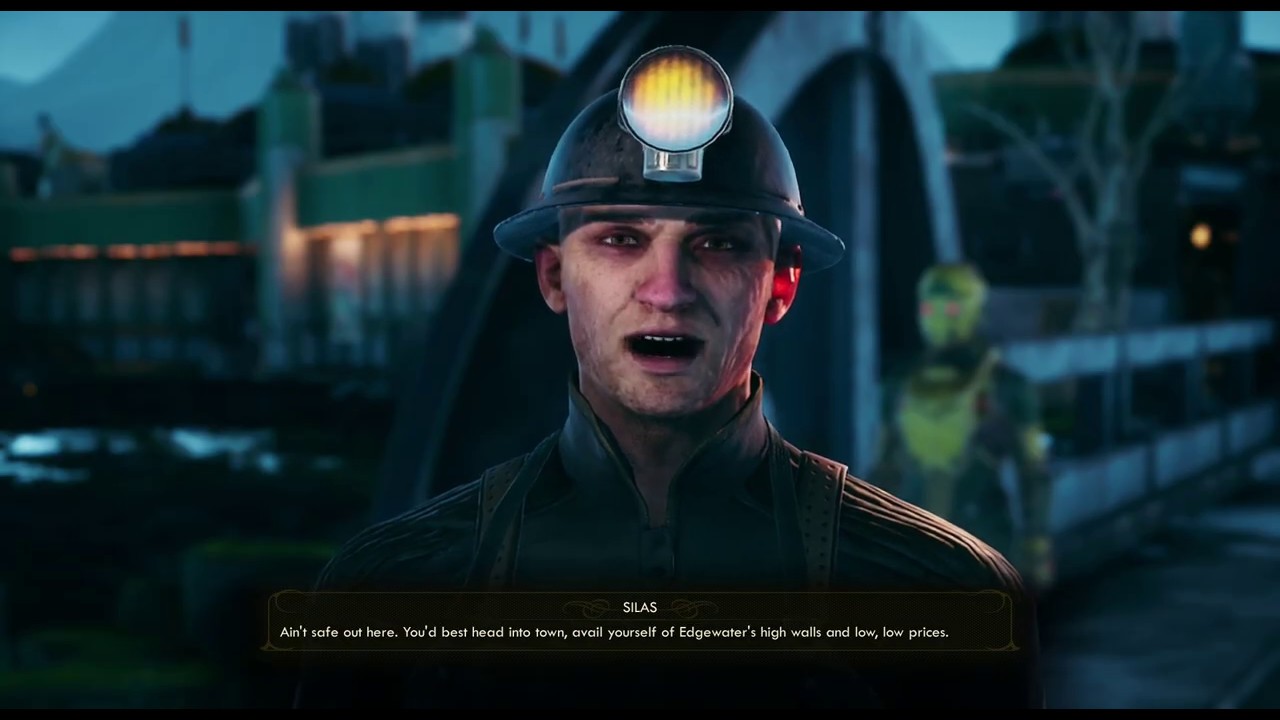 From a visual perspective, things are also barrier-free. Conversations are surrounded by a dark box making them easy to read and selectable replies to conversations are also easily legible. The option to enlarge text is also available along with the ability to increase or decrease opacity in subtitle backgrounds. Interactive objects are highlighted with a bright blue border ensuring that you won’t miss any valuable loot or objects necessary to complete an objective. this ability can be upgraded later on to highlight the interactive objects in a given space without requiring such proximity by the player, therefore making things even harder to miss. Waypoints appear both on a compass above the player and within the world, they are distinct and bright like the environment that surrounds them. Objectives are marked bright green, and as such, there is no danger in being lost, as roads are clearly designated on the map and even appear as bright purple lines in the ground in-game. if you stray far from it, simply fast-travel to the nearest town. A player’s reticle will even change color to distinguish friend(green) from foe(red) or neutral(yellow) it even changes to a square when facing interactive objects. The pros and cons of gear are easily legible thanks to large text, and the damage type of each weapon is color-coded so there’s no confusion.  A directional damage indicator makes identifying enemy positions a breeze since the indicator lingers for plenty of time. There aren’t any colorblind settings, but the distinct shape and size of markers offsets this.

Auditory impaired should have no issues of any kind with this title. Since so much of the experience here comes in dialog boxes and everything is so well-written and legible, complete with speaker-tags,  conversations are easy to follow. On the rare occasion that you do miss something, you can toggle conversation history to see all parts within the current conversation, and so, I don’t foresee any auditory barriers. Weapons are loud and bombastic, making them a joy to use, and there are many. Everything I mentioned in the visual section of this review should easily negate any auditory deficiencies gamers may have. 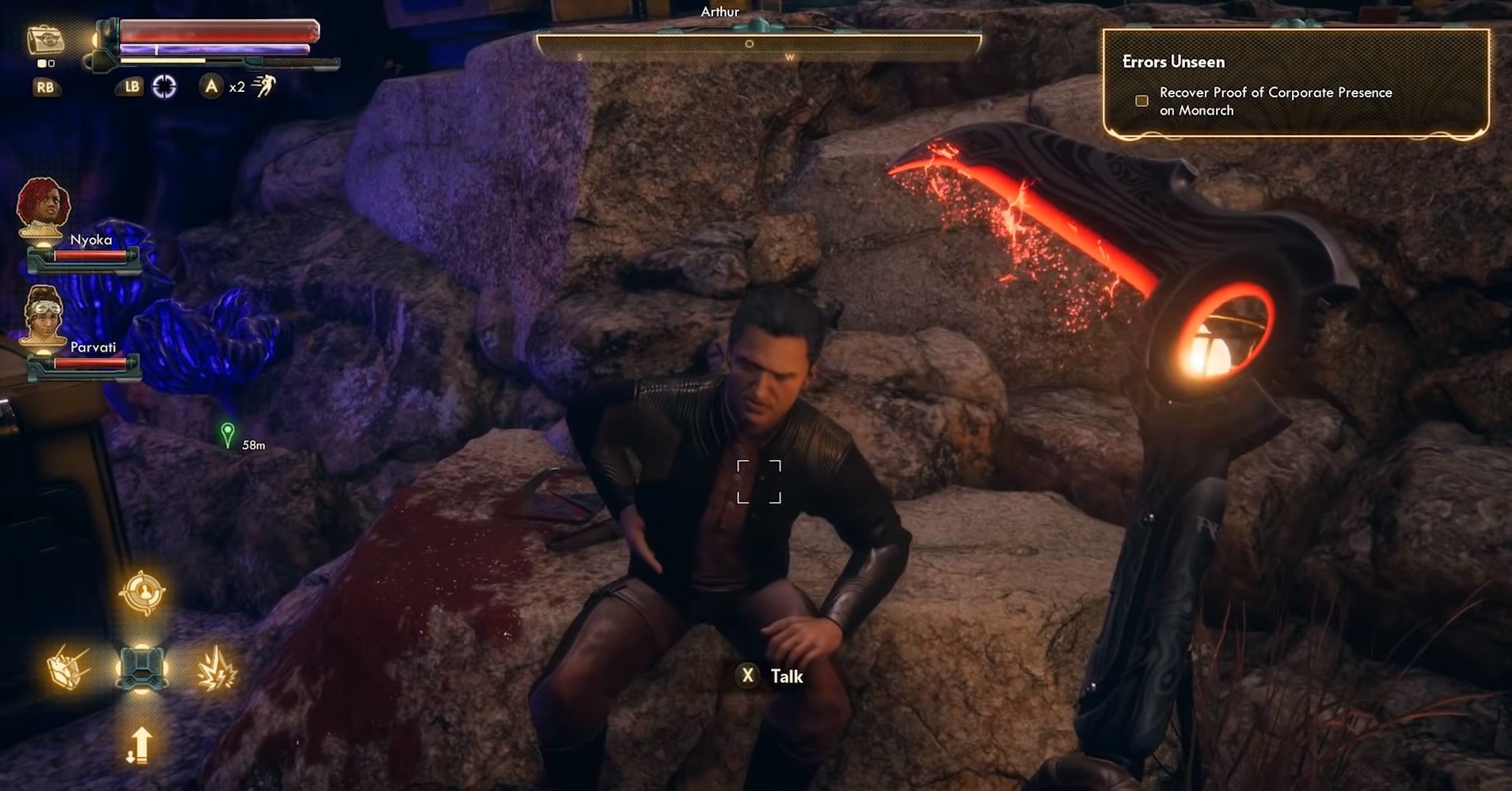 Outer Worlds was a passion project for all involved.  Its more streamlined interface eliminated a lot of the issues I experienced playing Fallout, and quite frankly I can’t recall playing an RPG that so meticulously addresses every facet of accessibility in gaming. This game doesn’t reinvent the RPG wheel, and its quests are mostly fetch-quests, but memorable characters, biting dialogue, and a dark sense of humor keep things interesting. If nothing else, this game is an example of accessibility done right. Don’t miss out!