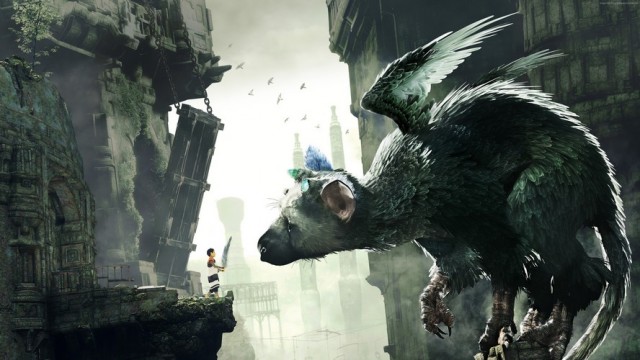 Unlike the studio’s previous games customizable controls are mysteriously absent from The Last Guardian. The 4 symbol buttons are used for the main actions in the game like throw, jump, interact and cancel. Although the basic controls are simple, having the option to change them could have proved useful later in the game when you have to control the beast Trico. The Last Guardian has you relying on Trico in order to proceed. He can be called on to help you get past certain obstacles, but he definitely has a mind of his own so the game encourages you to be cooperative and patient with him. However, later on you’ll be able to control him more directly. By holding a trigger button and pressing the directional pad, you can point him the way you want depending on where your character is facing. This command takes time and it isn’t always reliable. You move the main character with the left control stick and change the camera with the right control stick. The camera in The Last Guardian is the most frustrating part of the controls. The game has very little combat, yet you’ll be fighting the camera through most of the game. In my experience, the camera can go from following your character to moving wildly around the screen. Controlling it directly helps, but it’s still difficult to see things above you. This becomes even more apparent when your character is in a cramped space. So you’ll mostly be exploring and solving puzzles in The Last Guardian. Puzzles are fairly simple, usually just consisting of finding the right lever to pull or getting Trico to destroy a barrier. The pacing is slow and timing isn’t usually an issue. The Last Guardian has a few enemies that can harm you. Stone soldiers brought to life by magic can capture the main character and take him back to their lair (leading to a death screen). There’s no way for you to fight them so you have to rely on Trico to dispose of the soldiers. The best way to avoid death I’ve found is to climb on top of Trico or hide behind him until he’s dealt with them all. The death screen itself is problematic for disabled gamers with fine motor skill impairments. When your character dies you’re taken to a screen with hieroglyphic symbols popping up periodically. In order to bring your character back to life, you have to press random buttons in quick succession until all of the symbols are gone. Each time it happens it feels tedious and unnecessary.

For gamers with hearing impairments, The Last Guardian has automatic subtitles throughout the game. The language spoken is entirely made up for the game and most of the dialogue is narration, so deaf players shouldn’t have any trouble at all playing The Last Guardian. I also didn’t notice any audio cues that gamers would need to hear in order to proceed forward, so I don’t foresee any problems that could arise for disabled gamers with hearing impairment. On the visual side of things the game is usually very bright, but for those who need it there is a brightness slider you can change in the options menu. At times it can be difficult figuring out where to go next in The Last Guardian. This is because it’s not always apparent what object you can interact with or what ledge you can grab onto. It’s rare to see any kind of identifying color or shade in texture that could let you know where to proceed. This had me stumped for long stretches of time in the game, making me wonder if I hadn’t solved a puzzle correctly or if I just wasn’t going in the right direction. Colorblind players shouldn’t worry as I didn’t notice anything important communicated by color. There are some definite issues that I think certain disabled gamers with visual impairments could be affected by, but other than the ones I mentioned I didn’t see anything else.

The Last Guardian has beautiful environments and tells a heartwarming tale about a boy’s symbiotic relationship with a nearly extinct creature. However, the limited controls and needlessly complicated gameplay will make it hard for some disabled gamers to enjoy the game. Finding your way around the map is confusing without proper direction and doing something as simple as dying will lead to a stressful mini game that many disabled gamers will struggle to complete. The Last Guardian made sure to keep the same unique atmosphere and brilliant visuals that were in previous titles by the studio, but despite the ten-year development process, the game wasn’t able to keep the accessible options that were already available in their other titles.