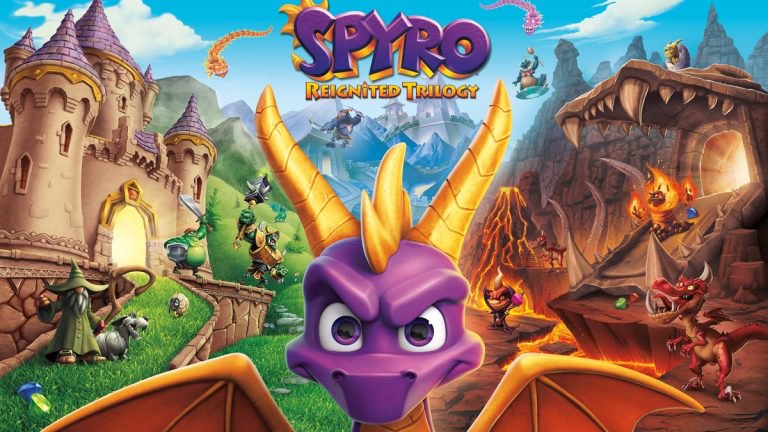 The feisty purple dragon is back to save the day again! I’ll be honest, nostalgia played a huge part in why I was so excited to play this remaster of my classic childhood platformer series. As a kid, I loved Spyro! The gameplay was simple, but the style was fun and lighthearted. Spyro: The Reignited Trilogy is a complete remake of the first three PlayStation 1 games in the original Spyro series. The new remastered games were built from the ground up and remodeled to fit the latest generation of consoles. I’m reviewing the PlayStation 4 version. Although the original series of games were made by Insomniac Games, The Reignited Trilogy was handled by the Toys For Bob development team and published by Activision. This new remastered installment of Spyro still has the fantasy wonder of the original, but there are some big problems when it comes to accessibility.

The developers took a very “If it ain’t broke, don’t fix it” approach to remastering the gameplay in this new Spyro. Meaning, not a lot has changed about the platforming and overall play style. This is a good thing because the original series had a near-perfect difficulty scale for the combat and controls. You’ll be spitting fire at Gnorcs, freeing your fellow dragons, and rescuing kidnapped eggs. Collecting gems is another staple of the series and you need them to advance to the next world. Not to mention you will be gliding like there’s no tomorrow. The same classic Spyro experience. Spyro: The Reignited Trilogy consists of: Spyro the Dragon, Spyro 2: Ripto’s Rage! and Spyro: Year of the Dragon. All of the games have nearly identical controls, except for a slight variation in the second and third game (Spyro 2 and Spyro: Year of the Dragon).

The combat and movement controls in this Spyro collection are very accessible to disabled gamers with fine motor skill impairments. Flame attack is used with the circle button (this is used to kill most things), charge attack is used by pressing square (when Spyro needs to hit something with more force), and X is for jumping (and gliding by tapping it twice). Triangle puts you into a first-person perspective mode, allowing you to see farther in the distance. The options button acts as a pause button and the touchpad shows you your progress and collectibles. You move with the left control stick and aim the camera with the right control stick. However, there is a feature in the options menu that lets you choose to have the camera automatically follow your movements or move it manually. I don’t remember this being a choice in the original games, so this is a welcome addition to the Spyro trilogy.

There is no difficulty level to choose from in this new Spyro, but like I said earlier these games are very easy, even on the default difficulty. Actually, I was able to beat the first game (Spyro the Dragon) in a matter of hours with ease. Enemies, like Gnorcs, are very numerous, but they are very easy to defeat. Some differ in size and armor, but all it takes is a different approach (a charge instead of a flame, for example) and you can get through the game fine. Most puzzles and obstacles in Spyro can be overcome with tactical thinking, rather than quick button presses or stamina. This was the norm for classic platforming games, and I appreciate the developers continuing that in this remaster. The mini games in this trilogy are the only times that you might need to do more advanced moves. For instance, in Spyro: Year of the Dragon, you can press R1 or L1 to do a “loop de loop” and win hard to reach gems. However, as far as I remember the mini games are completely optional and don’t require you to finish in order to beat any of the games.

Visually speaking the Spyro trilogy is very bright and colorful. If you have visual impairments and would like to make the screen darker or lighter, unfortunately there is no brightness slider available. The HUD is not very cluttered, but you do have the option of turning off and on the map indicator. The gems you collect are color-coded by their numberd value, but collecting them is essential, regardless of how much they are worth. So in the end, knowing the color of the gems isn’t all that important. However, there is the case of Sparx The Dragonfly (your sidekick and companion). Sparx acts as your health meter in the game. Whenever you take a hit, Sparx’s color changes, from yellow, to blue, to green, and then finally he disappears. This means that some colorblind players may have trouble distinguishing what stage Sparx is in and whether or not Spyro is about to die. Yes, you can tell that Spyro has to be hit at least four times to die and after Sparx disappears you have one hit to go. Still, those impaired will have to be paying close attention. Not exactly inaccessible, but something I think colorblind players should know.

Now to get to the elephant in the room. There are no subtitles available in Spyro: The Reignited Trilogy. Although, it is possible to understand most of the gameplay and puzzles through context clues, when it comes to the story, deaf players will have no idea what’s going on. That is a major problem. Two of the original games (from the PlayStation 1 era) definitely had subtitles included, so the fact that this trilogy doesn’t is pretty bad. Even worse is the way the publisher (Activision) has responded to the backlash on the matter, which was dismissive to say the least. Also, some enemies announce themselves with a signifying noise or phrase (like the Blue Thieves who taunt you). The hearing impaired will have a lot of trouble preparing for them, and have problems just experiencing the game in general.

Spyro: The Reignited Trilogy is beautiful, has simple controls, and is fun to play. It successfully captured the original games’ lighthearted tone and preserved the easy platforming gameplay. It’s just very unfortunate that the developers and publishers chose to not include subtitles, because this made the game inaccessible for a large portion of disabled gamers. Honestly, this is just another example of game companies not understanding that certain options are critical for some players to play their games. It’s sad and yet ironic because not including things, like subtitles, really does hurt game companies in the long run. Disabled gamers who would’ve paid for their games, now won’t because of the lack of options. Hopefully, this is a lesson that publishers will learn going forward with games in the future.