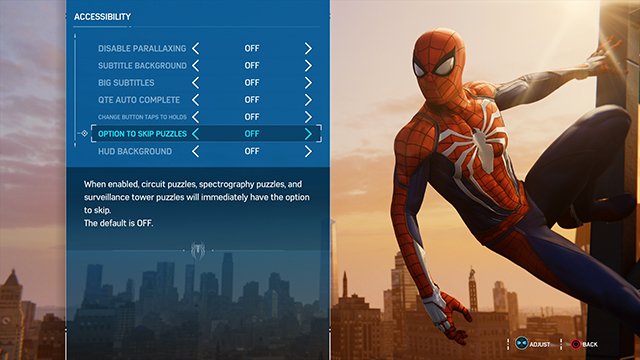 It was my express privilege to partner with Insomniac to bring accessibility features to Spider-Man for the PS4. Normally at DAGERS, staff members who work on games don’t write reviews on them. However, due to staffing issues, the only option was for me to cover this title. So, in a sense, I will be critiquing myself.

From a visual standpoint, Spider-Man takes accepted best practices and implements them in an incredibly effective manner. Subtitles are resizable and letterboxed. They also include dialogue tags so you always know who is speaking. Furthermore, the in-world text is highly readable because Insomniac borrowed a page from Naughty Dog and gave players a separate high-contrast letter box when Peter is examining written letters and journals. Players who are color blind will be happy to know that none of the visuals seem to rely on the ability to differentiate color. The mini-map is especially notable since all the icons are clearly legible and easy to distinguish from one another. Spider-Man even offers players the option to filter the mini-map to see only the particular kind of collectible they are after, which is a good thing considering the massive amount of content in this game which can make viewing the full mini-map overwhelming. The one mark against Spider-Man as far as visual accessibility is that some areas of the HUD feature small text that is nearly illegible unless you are sitting close to your TV. This only affects the descriptions of things like suit modifications and character upgrades, the nature of which is also communicated with a small looping video of Spider-Man performing each move, although this video also suffers from being too small.

Where Spider-Man for the PS4 really shines is in its audio accessibility. As mentioned before, Insomniac has taken what seems to be every accepted best practice for subtitles and included them in the game. This goes even so far as including a large amount of ambient subtitles, whether it’s villains taunting Spidey or bystanders in New York, odds are they’ve subtitled it, and although I have not made it all the way through the game, it is difficult to see Spider-Man for the PS4 posing any barrier to the hearing impaired.

The reason that this review has been so heavily delayed is that I wasn’t sure how to approach the fine-motor accessibility in Spider-Man. The reality is that for many players with fine-motor impairments, Spider-Man won’t be accessible. This is due in large part to the implied barriers present when making a Spider-Man game. When you’re designing a game based around a hero whose acrobatic movements are an essential part of his core character, you’re going to end up with a game that relies on a lot of precision, timing, and the ability to press multiple buttons at once. I understand the difficulties of creating a fine-motor accessible Spider-Man game, however, not having any controller customization is truly disheartening. Because the game is naturally so fine-motor intensive, players need any kind of customization a developer can give them. Unfortunately, Insomniac hasn’t done this which means that throughout the game, there are multiple points where you cannot progress without the help of an able-bodied person. It’s clear they’ve tried to make the game as forgiving as possible, but the reality is that many boss fights and vehicle chases will pose hard stops to fine-motor impaired gamers who don’t have the benefit of custom-built controllers. The good news is once you get passed these, there are lots of things to do in New York, but it’s hard for me to recommend this game based solely on its open world elements since players will need to progress through certain cinematic events that will require assistance in order to access the more accessible parts of the game. However, I don’t want to paint too bleak a picture of the fine-motor accessibility in Spider-Man. Yes, the lack of controller customization will pose a significant barrier for players with fine-motor impairments, but if you can get past specific moments, there’s tons to do as everyone’s favorite web slinger, and thankfully the game is forgiving enough and does not force players to retread much ground after failing. Insomniac even provided the option to skip QTEs and register a button hold as a button tap. This is a welcome feature, but there are a few isolated sequences where the accessibility settings don’t override the game’s normal settings. For example, during the Screwball side mission, Spidey will have to throw bombs with his web and then shoot them repeatedly in midair to disarm them. For some reason, this mission requires a rapid tap regardless of how your accessibility features are set up. However, cases like these are the exception not the norm, and for the most part, the QTEs and rapid button taps are optional thanks to Insomniac’s impressive suite of accessibility features.

On the whole, this was probably the most difficult review that I will write. I don’t want to sound ungrateful for the accessibility features Insomniac included, but there are some puzzling gaps in the accessibility that will make it difficult for fine-motor impaired gamers like myself to fully enjoy Spider-Man.