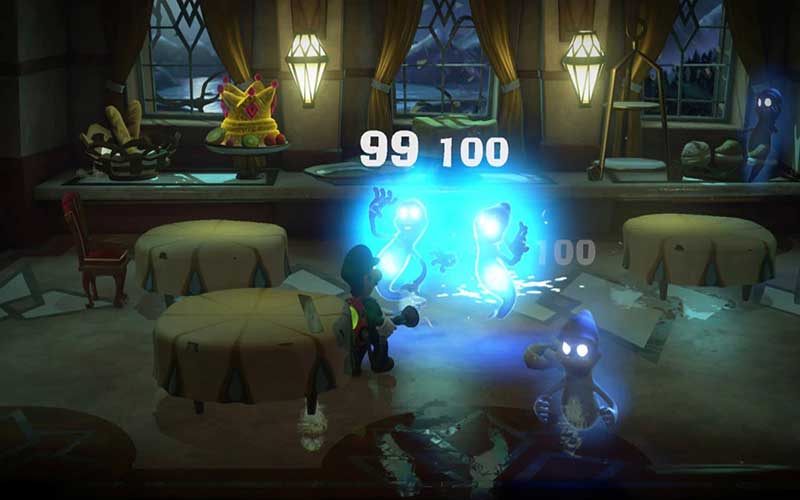 In the latest installment in the series, Luigi and his friends get a mysterious invitation to a hotel for a vacation getaway, but unfortunately for Luigi he has a ghostly surprise awaiting him! Luigi’s Mansion 3 is an action horror game developed by Next Level Games, published by Nintendo, and the first in the series to be released on the Nintendo Switch. This is the first Luigi’s Mansion game I have played, so I will admit I wasn’t familiar with the “ghost catching” mechanic, or whether it had evolved throughout the series. It is a funny and slightly spooky family-friendly game, but it has limited accessibility options overall, and gamers with fine-motor impairments will most likely have trouble dealing with the ghost combat.

Throughout the game, you help Luigi fight ghosts, solve puzzles, and find his captured friends. Luigi uses a vacuum-like device called the Poltergust to suck up ghosts, and that is mostly how you deal with enemies in the game. However, there is a new mechanic added in Luigi’s Mansion 3, and his name is Gooigi. He is a clone of Luigi made of goo that the player can control. Gooigi can slide into hard to reach places, help Luigi solve puzzles, and can even be controlled by a second player using local co-op (although I did not get a chance to try this out). You also have a ghost dog named “Polterpup” at your disposal that gives you helpful tips and points you in the right direction if you get lost.

Even with these features I still had a hard time playing Luigi’s Mansion 3, and I believe a lot of other disabled gamers with fine-motor impairments will have trouble as well. The core controls include: X to interact, Y stuns enemies with a flashlight, the right trigger sucks ghosts up into the Poltergust, and the left trigger blows them away. Combat is simple, but the main problem is not being able to customize the controls. Some ghosts require specific buttons to be pressed in order to defeat them, and the game offers very little when it comes player choice. If you have trouble pressing a button on the Joycon you are out of luck. In my case, I have trouble pressing the left trigger, and I hit a road block during my first ghost encounter, so I wasn’t able to get very far in Luigi’s Mansion 3 without customizable controls.

This game has very few options you can change at all. In fact, the title screen has no options menu available until you begin a new game and play for a little while. The options that are available give you the ability to change Luigi’s direction while vacuuming ghosts but not much else. One positive thing I noticed while playing Luigi’s Mansion 3 was that the game does very well with checkpoints. You can’t save whenever you want, but the game autosaves anytime you walk through a door, and that’s pretty helpful.

Visually speaking Luigi’s Mansion 3 is very bright, and most objects are highlighted if you can interact with them. The limited options menu does offer the ability to change the brightness level in the game. The game’s art style gives it a nice vibrant look that I think helps make things stand out on screen. I didn’t notice many color distinguishing objects so I believe colorblind players won’t have many problems. However, I wasn’t able to get very far in the game, so there was a lot that I missed.

I found there’s no way to change the sound levels in Luigi’s Mansion 3, but there are subtitles available. The game doesn’t really have much audible dialogue. Most characters just make sighing noises similar to Zelda or Banjo Kazooie. Luigi’s Mansion 3 does use jump scares quite often to ramp up the tension or for humor. As with most action horror games, deaf players will inevitably miss out on some of the scares that rely on audio. Most of these moments also have over-the-top visual cues that accompany them, so gamers with hearing impairments will still be able to enjoy most of what the game has to offer.

Luigi’s Mansion 3 checks all the boxes for fans of the younger Mario Brother, and it’s great he has a unique game series all to his own. Unfortunately, this game is not very accessible for those with fine-motor impairments; I failed to get past the first enemy without help from an able-bodied person, and I suspect others will have similar issues. There is a brightness slider you can change for gamers with some specific visual impairments, and the autosave feature in Luigi’s Mansion 3 is very helpful for fatigue. Hopefully the developers will consider adding customizable controls, but until then, Luigi’s Mansion 3 is inaccessible for me.