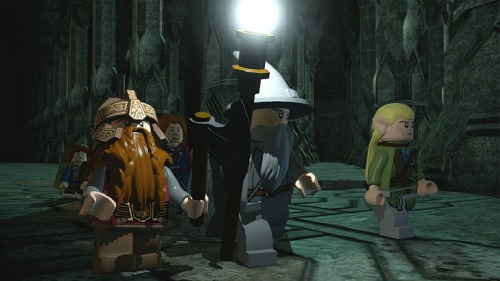 Upon purchasing the Vita, our reviewer knew that he would need more than one game in order to properly gauge the accessibility of the system. In order to get a proper feel for the hardware, our reviewer selected Lego Lord of the Rings, since previous Lego games have been relatively accessible for his type of disability. However, this game is so poorly implemented that it has major barriers to all types of disabilities, except for auditory disabilities.

The only area of Lego Lord of the Rings that has few barriers is the sound design and layout. This is because the Lego games only feature sound effects that enhance the game, rather than effects that the game relies on. And even though it also features voice dialog, because this dialog is taken straight from the movies, TT Fusion has created a set of subtitles that covers everything that is said in the game. It helps that there is no ambient dialog and that the only verbal communication goes on in subtitled cut scenes. As a result, the game should be accessible to a majority of players with hearing disabilities.

The controls are the biggest problem for both players with fine motor disabilities and players with sight disabilities. To begin with, our reviewer, who does not have a sight disability, found it hard to properly gauge distances and scale because the simple controls that the Lego games are known for are very unresponsive in Lego Lord of the Rings. As a result, the reviewer found himself repeated falling into lava on the very first level—not because he ran recklessly into these deathtraps, but because when trying to time a jump it was very hard to find the exact spot at which the mini-figure could stand and be close enough to the platform to make the jump while still avoiding the lava. Similarly, this game features a 3D platforming layout, which means that players will sometimes be called upon to move in front of and behind objects that are part of a level. Our reviewer could not find these passages with his mini-figure, even though he knew exactly where they were, again, because the controls were so finicky that one bump of the stick would move the mini-figure just enough to where he would hit the edge of the tunnel he was supposed to go through. Even worse is the fact that in most cases it was not clear when your mini-figure was not in a position to move through the level. It simply looked like the character was running repeatedly into an invisible wall.

The same problem will prove a barrier with fine motor disabilities. Our reviewer found that when he tapped the square button, there was a significant delay before his mini-figure would attack. As a result, it was hard to properly time his attacks, and he found himself dying over and over again, even on the very first level. If it wasn’t the lack of attacking that was killing him, it was the meteors that were raining down all over the battlefield. A small targeting crosshair displays right before these hit the ground, giving players the opportunity to move out of the way. But when the player would try to move, he would end up out of the targeting reticle but would still be killed because he was within the meteor’s poorly defined zone of impact. Combine this with the fact that Lego Lord of the Rings is a platformer and that it features quick time events that require rapid button taps, and it should be clear why this game is not very accessible for those with fine motor disabilities.

In all fairness, only the handheld versions of Lego Lord of the Rings have been released, and the console version may not have some of these problems, both due to some much needed redesign and to some greater accessibility among console systems. But as it sits right now, Lego Lord of the Rings is not very accessible, and should be avoided by most disabled players.

Please feel free to leave comments below the article that address your particular accessibility challenges with this game. If you feel there is a major omission in this review, please feel free to e-mail dagersystem@gmail.com with the word “revision” in the subject line. Please include specific details regarding anything we may have missed. If necessary, we will update our review based on your feedback.