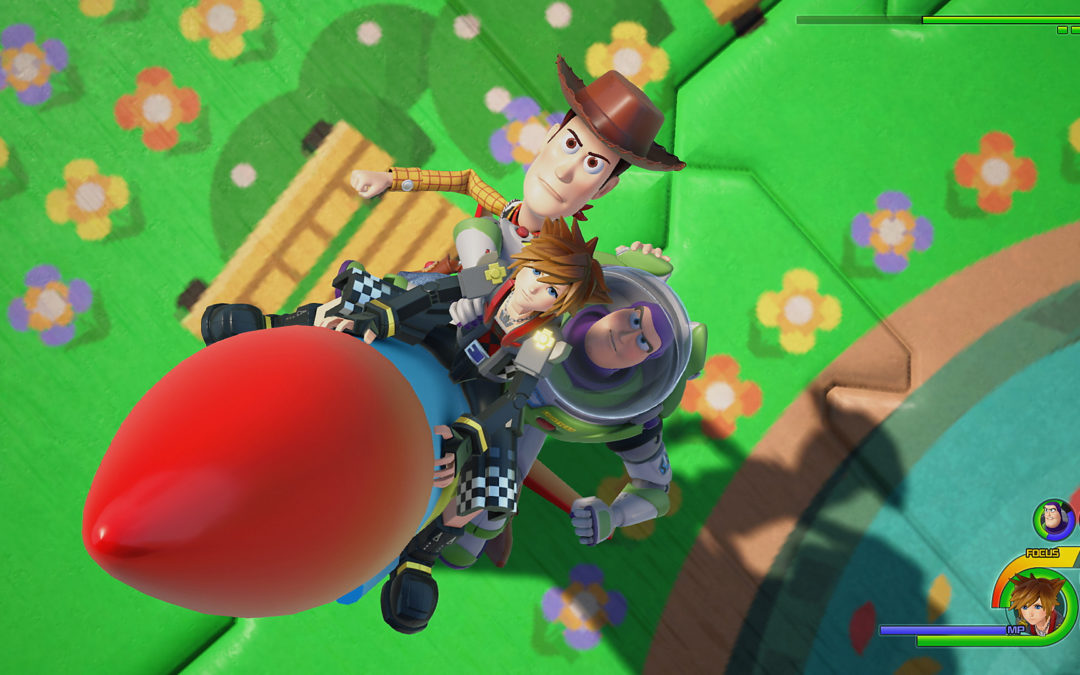 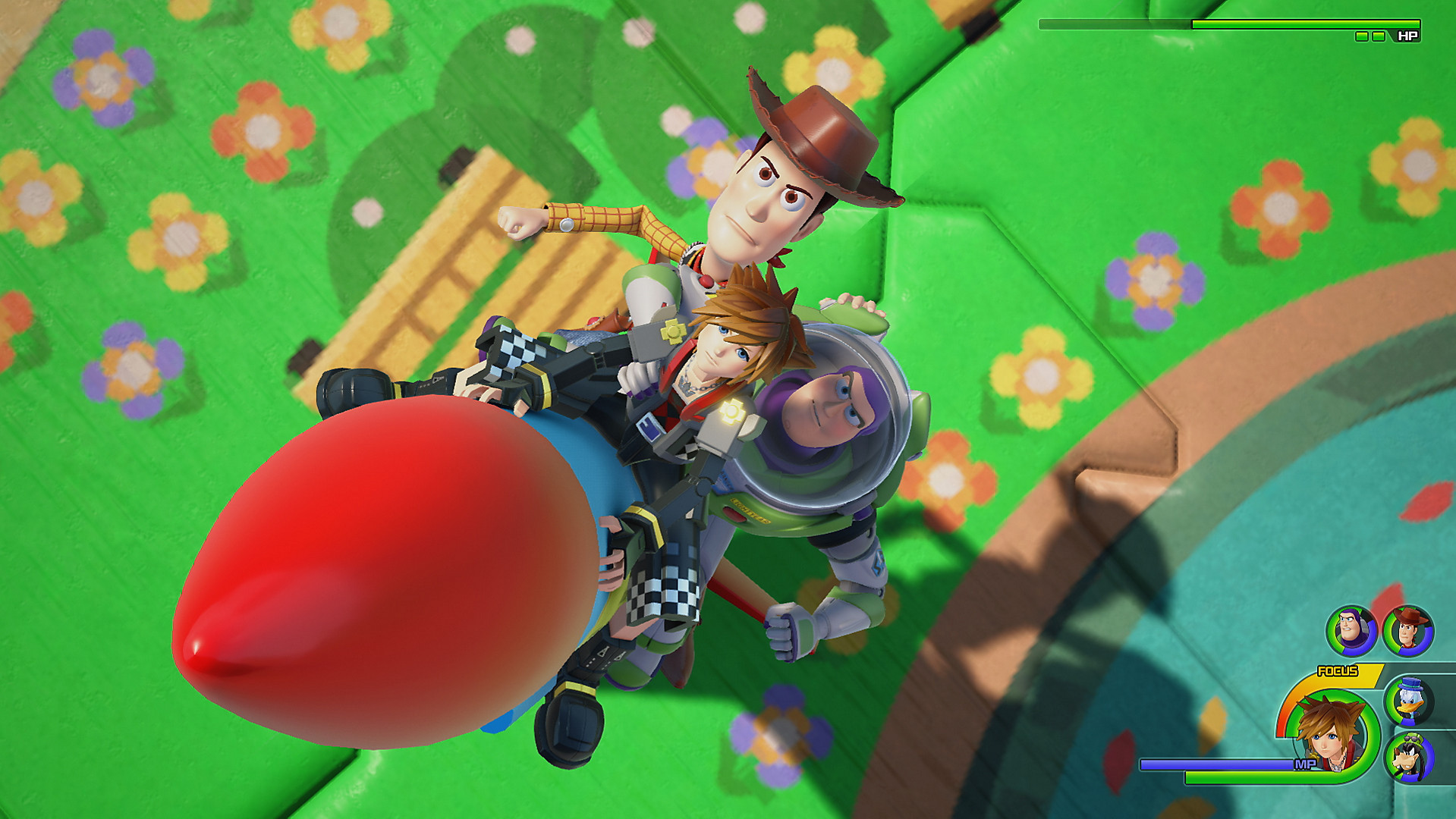 The imaginative crossover of Disney and Final Fantasy concludes with the third release in its mainline series! An action RPG with hack and slash elements, Kingdom Hearts is a collaboration with Square Enix and Disney. Kingdom Hearts has a story that makes it hard to describe to newcomers, but the gameplay is pretty straightforward. There are creatures of darkness called, heartless, and you fight them as you go to different Disney worlds protecting the colorful characters you meet. Kingdom Hearts 3 brings a lot of fun new Disney worlds to explore and a more involved combat system. Unfortunately, the developers made a few missteps when it comes to accessibility.

Kingdom Hearts 3’s combat has you predominantly mashing the attack button, but you can also use magic and summon other Disney characters to fight alongside you. You can upgrade and customize aspects of your party members’ abilities, much like an RPG. The core combat in Kingdom Hearts 3 hasn’t changed much since the first game. X is used for attack, the circle button is used to jump, and triangle is used to open treasure chests and perform combos. You move with the Left control stick and aim the camera with the right control stick. The directional pad is for maneuvering the combat and options menus. There are also a lot of new gameplay mechanics: some good and some bad. There are many features that could help the experience for disabled gamers, but there are some that will definitely hinder them.

Kingdom Hearts 3 has some shortcuts available (intentional or not) for disabled gamers with fine motor skill impairments in the options menu. You can hotkey one of the trigger buttons to allow for quick access of healing magic or items. You now have the option to make the camera automatically follow your movements, which is a nice helpful feature when fighting waves of enemies. One new option is the ability to choose between (Active) real-time combat during command selections or (Slow) a slowed down mode where you are given more time. However, by choosing the slow option you are no longer able to attack or evade until you have finished selecting a command. To me, that seems like an unnecessary penalty. Still, this feature is a welcome addition to the franchise and it can help disabled gamers with fine motor skill impairments customize their combat experience. You also have four different combat control presets to choose from in the options menu. Each one changes the trigger and interactive button commands slightly. For all the good accessibility options, there are also a lot of challenges in the game that disabled gamers with fine motor skill impairments will encounter. There are three difficulty modes to choose from and they are the equivalent of easy, normal, and hard. I have seen many outlets talk about how painfully easy the combat in Kingdom Hearts 3 can be, but I would argue they are not looking at the combat difficulty from a disabled perspective. Kingdom Hearts 3 has much more fast reaction commands than any other game in the series. Battle to battle, the combat can be very easy, but the difficulty curve in the game varies drastically depending on the specific gameplay mechanic being done.

For instance, my biggest problem with Kingdom Hearts 3 is it relies heavily on mini games, many of which are not optional. On the one hand you have new mechanics called “attractions” (made to resemble Disney World rides), which are powerful attack summons made available to you at random. These are usually accompanied by a very simple minigame and can definitely make the combat easier. Keyblade “form-changes” now also exist in this game to extend your reach during combat without as much effort. On the other hand, you have a new feature called “shot-lock” which lets you lock-on and teleport to specific access points, this allows quick movement on the playing field. This same command also lets you air step from one higher point to the other, getting you to new parts of the map. Unfortunately, to do shot-lock you have to be able to hold down one trigger button, aim with the right control stick, and press the square button all at once. You’re also given a limited amount of time to do this and have to be very accurate with your aiming abilities. Although this is portrayed as an extra option given to help you traverse the landscape, you are often forced to use this command in order to progress any further in certain levels. This is an incredibly difficult task to perform for disabled gamers with fine motor skill impairments. It takes precision aiming and holding down several buttons to complete. The command is highly unnecessary and what is worse is it pops up so randomly that you never know when to expect to do it. Shot-lock was so frustrating for me that I nearly needed help from an able-bodied person to get past it, coming right at the cusp of my playing capabilities. This leads me to believe that many disabled gamers with fine motor skill impairments won’t be able to progress in the game without help. Another example is the cooking minigame. In Kingdom Hearts 3, you encounter the rat from Ratatouille and have to help him collect ingredients to make new dishes (creating items that can potentially give you combat buffs) at his restaurant. It’s a neat concept finding ingredients during your adventure, but upon collecting the right ingredients and returning to make his meals you have to do a very physically demanding cooking minigame. The controls for this mechanic depend completely on the type of meal you are preparing. They can go from shaking both control sticks in the right direction they ask, tapping the symbol buttons, or doing a combination of the two. There is no room for error when you do this minigame, because every time you make just one mistake you lose that ingredient that you were using forever. This unnecessarily penalizes disabled gamers with fine motor skill impairments for not being able to complete the meal minigame. Not exactly a rewarding experience. Cooking isn’t really mandatory, but it definitely feels like you are left out of the experience because ingredients are found everywhere you go and your party members constantly remind you. Like I said before, the gameplay can be very fun and easy, but sprinkled throughout are physically taxing moments. Kingdom Hearts 3’s difficulty is too inconsistent to guarantee anything for disabled gamers with fine motor skill impairments, so it may be a struggle for them.

Kingdom Hearts 3 has many accessibility options for gamers with visual impairments. Visually speaking the game has bright and vivid colors throughout many Disney worlds, but for those who need it there is a brightness and contrast slider available in the options menu. Sometimes during combat the cinematics can get very chaotic and often the screen can get cluttered to the point of not knowing what is happening. Thankfully, Kingdom Hearts 3 offers ways to customize the screen. You can turn off keyblade animations, attraction animations, and summon cinematics in the options menu. The map can be removed from the screen to free up space, if you like. Also, the command menu can be customized to either remain as the basic design or change design to match the Disney World you are residing in. I didn’t notice many color distinguishing items in Kingdom Hearts 3, these items at least had highlighted signifiers or an obvious prompt. Where I think some colorblind players will run into problems has to do with certain side missions. For instance, the Frozen level has you doing a side quest where you need to collect different pieces of Olaf the snowman’s body. The area is covered in snow and it can be difficult to differentiate between the snow and the object you’re looking for on the map. Also, the Pirates of the Caribbean level (which already has a more gray and brown tint to the entire world) has a similar quest requiring you to collect over 100 white crabs. I can see potential problems for colorblind players looking at a white on white background, as the sand in this level is also white. There are context clues to help, but I just thought it was something worth mentioning.

They got the sound covered in Kingdom Hearts 3. There are subtitles available for both the cinematic cutscenes and dialogue during gameplay. I did notice that subtitles were not always present for background dialogue and things like party banter or character exclamations. Honestly though, exchanges between characters are pretty straightforward. If there were any confusion, it would have more to do with the complex story and not how detailed the subtitles are within any given scene. You have control over the master volume, but not individual sound levels. The soundtrack can give good nostalgic vibes, depending on the Disney movie it’s referencing. However, none of the music is important to the story, and I believe deaf players should have an easy time playing the game.

Kingdom Hearts 3 is a difficult game to criticize. Kingdom Hearts 3 has been eagerly awaited by many fans for over 10 years. This series has been dear to me for a long time. I always loved the combination of childlike nostalgia from the Disney side and mature story telling from the Final Fantasy side. The game is beautiful, and at times, the game is incredibly fun to play. The Toy Story and Hercules levels actually have some of my favorite moments in the game. However, I can’t ignore the glaring problems with accessibility. Many parts of Kingdom Hearts 3 require large amounts of effort for disabled gamers with fine motor skill impairments. The developers may have experimented a little too much with the gameplay mechanics and made parts of it too involved. Deaf players should have an alright experience playing the game, but gamers with fine motor skill impairments could very well hit a challenge that is too much for them.