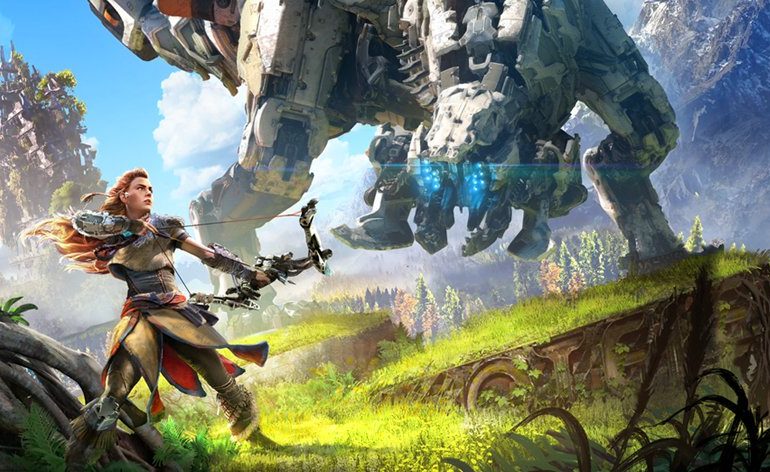 Cast out by society you must forge your own path. Horizon Zero Dawn is an action RPG in an open world setting that was developed by Guerrilla Games and was released on the PlayStation 4. You’ll play as Aloy, a tribal woman learning to survive in a world taken over by robots. Horizon Zero Dawn has action heavy combat that requires quick reaction time. Thankfully by choosing the easiest difficulty mode in the game, combat becomes very simple for most disabled gamers.

Horizon doesn’t have any option to customize controls, which is unfortunate for a game that has so much combat. You’ll also quickly notice that Horizon is a type of game that tries to utilize every button on the controller. Sure you can get by pressing a few buttons, but at some point you will have to press every button including the control stick buttons at least once. I’ll be honest and say that I did have to eventually use the PS4 re-mappable controls for certain moments in the game. The symbol buttons are what you mainly press: the interact button is used to jump and the cancel button dodges. The directional pad lets you cycle through tools, make traps, and use healing items. The trigger buttons are used for aiming and firing your weapons. The biggest problem I had with the control options was the aim assist feature. It doesn’t work. Yes there is an option to turn on aim assist, but no matter what I did I still had to aim my reticle perfectly in order to hit targets. I read online that some people were claiming that the aim assist in Horizon wasn’t fully automatic, in the sense that it didn’t lock onto targets. The idea is that it only slightly guides your arrows in the general direction of your target, but I didn’t even notice this change. Horizon’s saving grace is its difficulty modes. There are four difficulty modes to choose from: ultra hard, hard, normal, and easy. Easy mode is literally described as “an accessible difficulty level for those who simply want to explore the world and story” and this is accurate. A lot of the gameplay in Horizon consists of exploring the open world and doing side quests for other tribes, so easy mode complements this very well. Choosing this mode lowers the amount of damage to your health, as well as increasing your strength allowing you to kill robotic enemies with just a few hits. You can hit most enemies with melee attacks without having to worry too much about getting killed. This mode is essential for disabled gamers with fine motor skill impairments to play Horizon. I recommend easy mode for any disabled gamer with fine motor skill impairments because it makes combat much less stressful.

For disabled gamers with hearing impairments there shouldn’t be any trouble at all playing Horizon. There are subtitles you can turn on in the options menu with a variety of languages to choose from. The subtitles have nice bold font and I didn’t notice any big inconsistencies with the dialogue. The music in Horizon is nice and nature appropriate, but I don’t think any sound effect is important to the atmosphere or the combat. Also, there are audio options available that let you change the individual sound levels for the effects, music, and dialogue in the game. Visually speaking Horizon is very bright, but if you would like for more brightness there is an option to change that in the menu. The HUD can get pretty cluttered especially when you’re using the focus ability, which is an advanced hologram technology the player utilizes to look for clues. Thankfully, you can turn the HUD off in the options menu. There are weak points on some robotic enemies that are sometimes distinguished by certain colors. However, colorblind players shouldn’t worry as hitting these weak points are not the only way to kill enemies.

Horizon Zero Dawn has a very unique cyberpunk style and the game has some of the most beautiful visuals I have ever seen. The character models and facial expression animation in Horizon Zero Dawn is very impressive. Easy mode streamlines combat and helps disabled gamers with fine motor skill impairments. Still, the aim assist needed more tweaking. Lastly, gamers with hearing impairments and colorblind players shouldn’t have any trouble at all playing Horizon Zero Dawn.