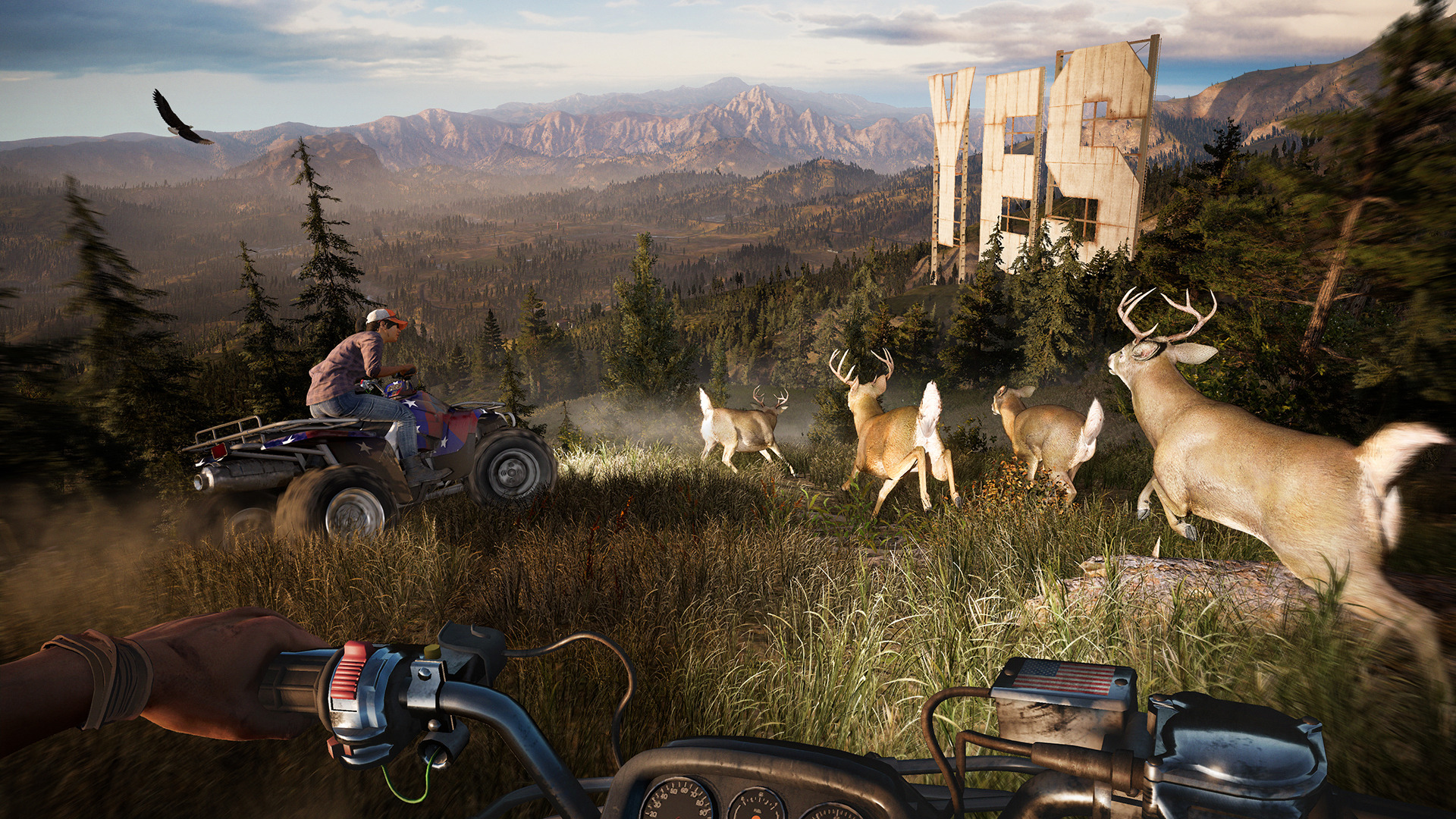 I have often said that in a vacuum, open world games such as Ubisoft’s latest entry in the Far Cry series are more accessible than their more linear cousins. Far Cry 5 has the bones to fulfill this prophecy, but its natural accessibility is hampered by a few unfortunate choices by the development team.

For players with fine motor disabilities, Far Cry 5 doesn’t seem to offer much on the surface. Limited controller customization means that it will be hard for console players to tailor the experience to their physical limitations. However, if like me you are able to make the standard controller layout work, there is quite a lot that this game can offer you. Far Cry 5 takes place in Hope County, an expansive swathe of Montana that has been taken over by the insidious Project at Eden’s Gate, a cult that uses drugs, torture and the promise of sanctuary during the collapse to recruit droves of enemies to do their nefarious bidding. During my playthrough I got through roughly a third of the game, liberating the entire Holland Valley before moving on to the other three regions that were still under Pegy control. During this time, I could always find something to do, if one quest proved to be inaccessible, there were always several others to choose from. In one instance, the cult leader for the Holland Valley, John Seed, sends out a convoy to hunt you down. I tried taking it down on ground level, but it wasn’t until I unlocked the first of the games planes that I found the easiest strategy. Just fly overhead and bomb each convoy into oblivion. This experience was repeated over and over again. Every time that I would come to an inaccessible quest, I would either find something new, or eventually unlock an easier way to accomplish it, but the games overall flexibility is hampered by some rather perplexing story choke points that do not feature enough saves to avoid turning the more cinematic moments into a slog. For example, I am currently about to finish driving the last remnants of the Pegys from the Holland Valley in my playthrough, but I’m stuck on the battle for John Seed’s bunker because every time that I die I’m forced to restart the encounter from scratch. It’s confusing why a game that is so flexible in so many areas forces a player to go through these cinematic experiences without giving you enough save points to avoid retreading the same ground multiple times.

For players with visual disabilities the situation is even worse. Much of the environment that players will encounter will have clear blue skies behind the compass, meaning that it can be hard to track specific points of interest when you have low-vision, given the lack of contrast between the white icons and the light blue sky.

Far Cry 5 also boasts a color blindness filter which turns all of the red icons yellow, but this does little to help, since the game features lots of lighter yellows that can make the bright yellow of each icon harder to see, if you’re tracking enemies behind a ridge or taking cover behind a brownish-yellow building or vehicle. The color blindness filter helps, but I found myself, even without a color deficiency, unable to find the icons quickly in combat to avoid dying repeatedly. My guess is that it’s because when in color blind mode the icons blend in a little bit too much with the environment. It would’ve been better to see them go with a Heroes of the Storm type color scheme that changes the reds to orange, as that would’ve stood out better in almost every environment in Hope County. While there is nothing in Far Cry 5 that relies on fine detail, the lack of contrast caused by the default color-blind palette and the color-blind mode make it hard to recommend for players with visual disabilities unless they are already hardcore Far Cry fans.

The situation seemed much brighter for players with auditory disabilities. However, upon doing a little more research, I found that the barriers for the hearing impaired are actually fairly extensive. No ambient subtitles means that players are often ambushed by enemies with very little warning and a lack of character tags in the in game dialogue makes following the story extremely difficult. On the whole, it seems like for players with hearing disabilities, while the mechanics of Far Cry 5 may be accessible, there is little else that is.

On the whole, its unfortunate that Far Cry 5 couldn’t receive a higher accessibility score, but it is easy to see that with a few more accessibility features the Far Cry series could become the leader in accessible open world games.