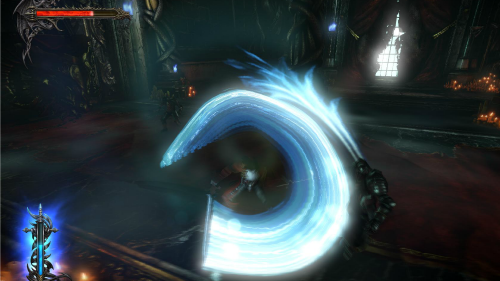 There are a number of features that make a game playable without adaptations. There are other features that make games completely inaccessible. Castlevania, Lords of Shadows 2 holds a different kind of spot in the gaming world, especially for this disabled gamer. The game is playable, but the way that the game is designed will be a constant reminder that there are players who do not have a disability and can play this game a lot easier.

The menu structure serves as a solid clue of how exclusive this game will become, even in the beginning stages. As someone with a substantial visual impairment, I found the menu to be a frustrating gimmick at best. The menu structure is that of words, in irregularly shaped font that looks like writing from a quill, placed on various parts of the left page in a book. What makes this menu so complicated to navigate is there was not any clear indication of where I was in the menu. I tried searching for a boarder around the text, but since the book was lit up by candle light, I could not even tell what selection I was on so I could not explore the options menu to see if the controls could be mapped, or if subtitles, and or captions, could be enabled. I finally realized that the text my cursor was on was flashing, but this made the text even more difficult to read. I required help just to select the easiest difficulty setting.

Lords of Shadow 2 takes place hundreds of years after the original Lords of Shadow and its sequel, Mirror of Fate. If you missed these – or can’t remember them – you’ll be treated to an exhaustive recap, (those who played the first two will have a better appreciation of finer details, though). As Lords of Shadow 2 opens, Dracula – formerly Gabriel Belmont – has seen better days. He awakens in modern times, drained of strength and hidden away in a crumbling cathedral at the heart of a thriving city. Built upon the foundations of Dracula’s castle, the city stands as a monument to his defeat centuries ago, and he is content, it seems, to secretly wither in shame for the rest of eternity.

As Dracula, my first task was to battle the raid that invaded my castle. This section also serves as the tutorial, which, luckily, has easy to read large white text on a black background. The tutorial will guide you through various fighting mechanics, even dodging and blocking as well as drinking blood. This is all very satisfying and should be no problem for some physically impaired gamers. One-handed gamers will have a problem though because some actions will require that you hold down one button and tap with another. There might be a toggle option in the controls menu that I was not able to get to, however.

At first, you will command only a whip, manifested from Dracula’s own blood, but soon you will acquire both the Void Sword and Chaos Claws. These have the power to heal and break enemy guard, respectively, and can be equipped instantly with a tap of either shoulder button. The enemies are really difficult to see, partly because all the weapons emanated an animation effect upon every swing leaving a trail of color behind the weapon. On the plus side, this was the only way to tell what weapon I had equipped even though the animations blocked my immediate view of people close to me. Colorblind players will benefit from the different animation effects, though. The attack buttons are easy to get the hang of, Y attacks lightly and quickly and the B button serves as the heavy attack. I did not have any trouble stringing various combos together, making me feel as though I was the true lord of the night.

It is no question that the combat is easy, even for disabled gamers but other elements of the game add up to a very exclusively frustrating experience.

The beginning tutorial combat gives a nice impression but after the tutorial ends that’s when accessibility problems begin to pop up very quickly and will definitely leave disabled gamers frustrated. The sequence after the tutorial battle found me performing various platform jumps and plagued by one quick time event. If there’s one, there has to be more.

The section that halted my progression though was a session, at the beginning of the game, where I had to climb a tall machine as some gold plated foe kept shooting fireballs at me, hitting me every time because I had to constantly react to his shooting while trying to make my way past the spinning knives and other obstacles that killed me repeatedly. Using the left analog stick I was to hoist myself up the side of a tower that was laced with various environmental hazards as my foes periodically target me, causing me to have to dodge the immediate threat without leaving me ample time to assess what kind of environmental threats were ahead of me. The dodging and climbing were all achieved with constant tapping of the A button but the many activities happening on screen, coupled with a dynamically moving camera forced me to realize that I would not be able to get past this beginning part without assistance, and this was on the easiest difficulty setting.

My quest as Dracula ended, and even though this was my own gameplay experience, I have a feeling that all of the activity in the game will be hard for physically disabled gamers to manipulate, especially those using one-handed controllers. Subtitles, and or captions, were not on by default and I was unable to look in the options menu for caption settings because of a barely visible menu interface.

Visually, the game looks as stunning as could ever be on a 360. The colorful radiance weapons emanate will serve as helpful indicators to tell visually impaired gamers what weapon they have but with a camera that’s distant from the action the colorful weapons will, sometimes, be all the visually impaired will see, let alone enemies.

The game is beautiful in its own merit. The environments pulse with vibrant colors and evoke a sense of dark shine encompassed by the wonderful musical score. The voice acting is stunning to say the least, but in terms of accessibility and inclusion this game doesn’t even become barely accessible long enough to hold true weight when taking multiple disabilities into account. At best, there’s a sliver of accessible elements that make the game playable for a few minutes but there will always be one inaccessible mechanic or a mechanic that will be, undoubtedly, frustrating for disabled gamers with no apparent options to make those moments bearable. This legacy installment is best left avoided for disabled gamers because there are titles that spread the wings of adaptive gameplay far beyond this adventure.

Editor’s Note: There are partial subtitles available for important dialogue, and the game’s combat relies mostly on visual cues.