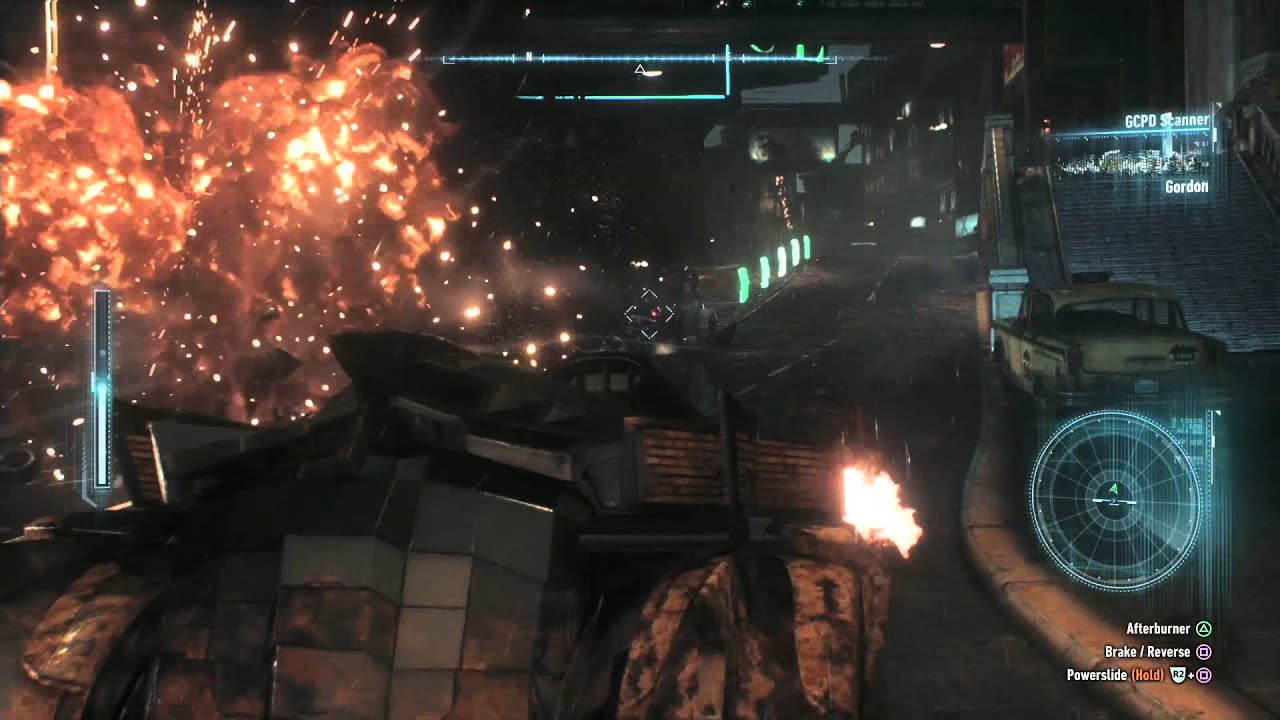 Batman Arkham Knight is the latest game from Rock Steady that promises to bring the quintessential superhero experience to new gen hardware. The game takes full advantage of the new technology, with beautifully realized graphics and a massively sprawling world that dwarfs any of the previous installments of the Batman games. However, from the standpoint of accessibility, certain gamers will be completely excluded from the experience.

If you are a gamer with a visual impairment, you will be happy to know that nothing in Batman Arkham Knight seems to rely on color, except for a couple Riddler challenges, and the Wayne Tech upgrade screen. The good news is that the contrast between these colors is high enough that players with all but the most severe levels of color blindness should be able to distinguish without much difficulty. Similarly, nothing in this title is communicated using ultra-fine detail. The on screen text seems to be high contrast enough and during my play-through I did not run into anything that relied on subtle visuals. However, other barriers precluded me from progressing far enough in the game to say that Batman Arkham Knight is definitively barrier free for the visually impaired.

These barriers were the fine-motor barriers, which the game is rife with. To begin with, Arkham Knight represents a substantial departure from the formula of more accessible Arkham games, by including prolonged driving sequences.  This will mean that players will not only have to be able to execute the games hand-to-hand combat system, but players will also be required to effectively pilot the Bat-Mobile. A task which at times requires three different fingers to execute the needed maneuvers. Combine that with the fact that on the console version there was no controller customization, and the picture gets even bleaker. The reality is that less than 20 minutes into the gameplay I reached a point from which I could not progress without the help of an able-bodied gamer, and even he had trouble with the games clunky controls. If, like me, you are on a PS4, you did have the option of remapping the controller, but this was more confusing, because in the game it would still give you the original button prompts, not compensating for any changes in controls. Beyond this the one bright spot is that many of the main QTE’s that posed barriers in the past (prying open vents and grates that Batman could crawl through) has been slowed down to an accessible rate. Unfortunately, this is not enough to rescue Batman Arkham Knight from being completely inaccessible to any gamer with significant fine-motor impairments.

The news is much better for gamers with auditory impairments however, because Warner Brothers seems to have a good understanding of how to implement subtitles effectively. Upon inserting the game, before I was even able to create a new save file, I was prompted to adjust the games settings, one of which included subtitles. There is no possibility of missing this option if you are over eager and try to launch directly into a new game. Once in the game, the subtitles are fully labeled, telling you who is speaking, and even include the ambient dialogue that is piped in, courtesy of Batman’s police scanner. Once again, however, the fine-motor barriers precluded me from getting far enough into the game so all that can be said for certain is that Batman Arkham Knight appears to be thoroughly accessible for gamers with auditory impairments.