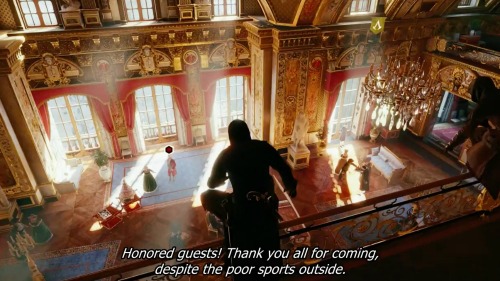 Assassin’s Creed Unity is the newest entry in Ubisoft’s blockbuster franchise. Its gorgeously executed and tells the compelling story of Arno Dorian, an assassin raised by Templar as an attempt to bring peace to the two orders in France. Many critics are saying that Unity marks a much needed revamp of the Assassin’s Creed franchise that has given new life to a series that was running the risk of stagnation. Unfortunately, most of these changes have made the game so inaccessible that even though I love the franchise, I can’t recommend it to any but the most patient disabled gamers.

For starters, Assassn’s Creed Unity is probably most accessible for those with visual disabilities, but that’s not saying much. The game still suffers from white text that is hard to see even for the well sited. A mini-map with cluttered and hard to distinguish icons and an even greater reliance on color, for example, chests that Arno can unlock are now divided into three groups on the mini-map. Red chests are locked and require a lock picking mini-game to open. Blue chests are Nomad chests, which use the Assassin’s Creed companion mobile app, and white chests are simply unlocked and ready to be opened. Even worse is the fact that eagle vision, the way that Arno tracks targets in a crowd, now has a timer on it, which does not give short sighted players the option of turning it on and leaving it on during missions.  For all of these flaws however, none of them are completely game breaking, and it is reasonable to say that the very very patient can overcome the visual barriers in Assassin’s Creed Unity.

I know I have often seemed inconsistent with my reviews of previous Assassin’s Creed games because of my love for the franchise, but even with my admittedly rose colored glasses on, the fine motor accessibility of Assassin’s Creed is abysmal. I am one of the biggest proponents of the Assassin’s Creed multiplayer for players with physical disabilities looking for a competitive experience that they can physically access. However, even that does not do enough to make the Assassin’s Creed Unity experience accessible enough for the fine-motor impaired gamer. It is true that the old barriers are still there, such as a complete lack of controller customization, but there are also new barriers that have made the game much harder. For example, one of the much praised new features is the character customization. And while this usually makes games more accessible, this actually has the opposite effect, because now instead of being able to do all of the things that an Assassin like Ezio would do automatically, now players have to save up upgrade points and spend them wisely. The result is that Arno is too weak in the beginning for most disabled players to be able to control him effectively.  One or two shots from a pistol-wielding enemy in a crowd is enough to kill Arno, sending him back to the beginning of the memory sequence. I’m not saying I dislike the character customization, but the way it was implemented made the game so much harder for the people who have difficulty handling the controller, that if Ubisoft does not make changes, I’m afraid that the future of the Assassin’s Creed franchise may be inaccessible for those with fine-motor disabilities.

The only accessibility that hasn’t changed is the accessibility for the hearing impaired. The game still offers subtitles, and yet still does not subtitle the ambient noises. Guard’s conversations as well as alert noises can have an even bigger influence on Unity because players can use what they hear to trigger new missions. This is the case of not the level of accessibility changing, but of an extra feature being added that isn’t compensated for by the existing accessibility measures.

I have always loved the Assassin’s Creed franchise, I do appreciate that Ubisoft is trying to revamp the franchise with Unity, but unfortunately the unintended result of that is that the game has taken a turn for the inaccessible, although not completely.