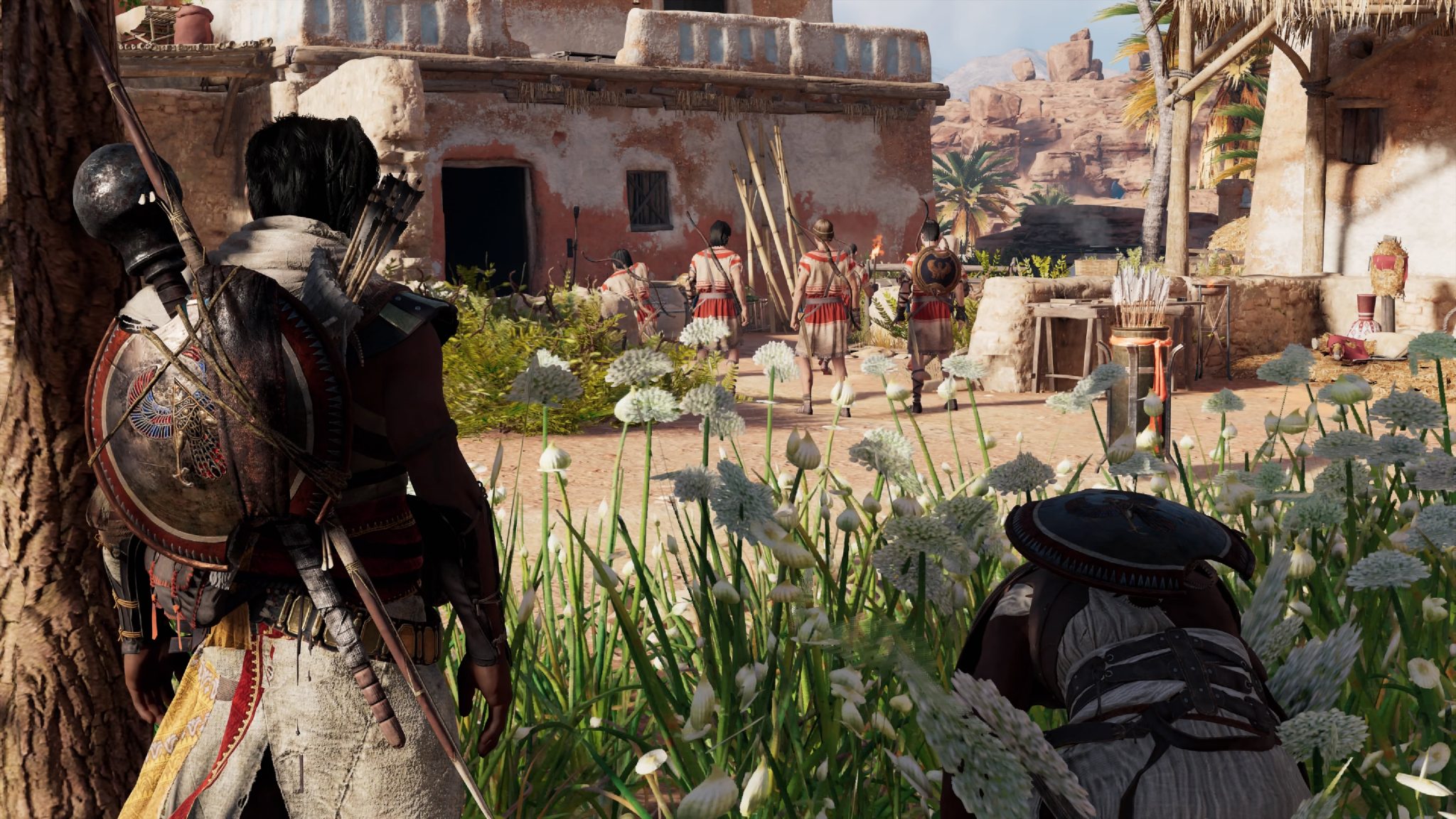 Long time readers of DAGERS will know that Assassin’s Creed is among my favorite franchises in games today. I have often touted the games historical setting as an example of how video games can provide much needed escape for disabled players. This perspective has too often colored my reviews and made me perhaps more positively biased towards Assassin’s Creed titles than I should’ve been. However, I can say that in Assassin’s Creed Origin’s, Ubisoft definitely seems to be taking some concrete steps towards accessibility that indicate an overall positive direction for the franchise.

From a visual standpoint, Assassin’s Creed Origins is probably the most accessible Assassin’s Creed game to date. In previous games, the Eagle Vision mode grayed out the screen, and highlighted particular targets in various colors of similar saturations. This made games like Assassin’s Creed Syndicate and Black Flag harder to play, because the colors in Eagle Vision mode would bleed into each other for certain color-blind players. This problem is gone with Assassin’s Creed Origins. Because it tells the story of the birth of The Order, we get to see the source of a lot of the powers that Assassins would exhibit in later centuries. The Eagle Vision is provided in this game by a literal eagle that the player summons to get a bird’s eye view of the battlefield, and instead of graying out the screen, the player is shown a top down view of the battlefield with a circular reticle that gets tighter the closer the player gets to locating the target. Furthermore, the mini-map no longer relies on color to distinguish between icons on the map. Meaning that players with color deficiencies should have no problem finding particular activities or completing specific quests. The visual accessibility extends even to the subtitles. Ubisoft, in my mind, has replaced Crystal Dynamics as the company with the best subtitle implementation in the industry. Not only are the subtitles of adequate size, but they are also letter-boxed, making them completely readable, regardless of what the in-game environment is like. They also use dialogue tags, which tell the player who is speaking during the games many cinematic sequences.

For players with fine-motor disabilities, unfortunately, this is still an Assassin’s Creed game. That means that there will be certain overt barriers that players will simply have to deal with. I played the game both on the PC and the PS4, and I was disappointed to see that remappable controls only existed for the PC version, especially because for my particular disability, wrapping my hands around a controller is easier than laying them on the keyboard. Combine that with some strange menu implementation in the console version and Assassin’s Creed Origins for the console is probably not flexible enough to accommodate most fine-motor impaired gamers. Another thing that I was disappointed about was that there is no easy way to mark mass amounts of enemies in an area. One of my favorite activities is taking down enemy forts, and to do this, I would often switch to Eagle Vision and mark all of the enemies within the restricted area so that I could attempt to take them all down silently. As a side note, stealth is rather difficult at the beginning of the game until Bayek receives his trademark Hidden Blade. The larger problem, however, is that I would have to manually mark each individual enemy in the fort, and it was very easy to miss targets because you don’t know if you’re looking at one until the game spawns an icon over their head. Even more unfortunate is the fact that there’s no save anywhere mechanic in Assassin’s Creed Origins. If this feature existed, fine-motor impaired players would be able to execute complex sequences without worrying about having to retread the same ground over and over again if they made a mistake. As it stands, Assassin’s Creed Origins is very unforgiving and players need to be aware that they will have to retread a lot of the same ground when they make mistakes. By far, my biggest complaint with Assassin’s Creed Origins is the lack of a competitive multiplayer. Again, long time readers will remember that I often reviewed previous Assassin’s Creed titles, not in terms of their single player, but of their multiplayer, because it was one of the few competitive online multiplayer experiences that did not rely on speed, accuracy or twitch reflexes. Because of the Assassin’s Creed multiplayer, I was able to recommend games like Unity and Black Flag, even though their main story campaigns may not have been accessible, because they still gave players the opportunity to enjoy the game regardless of their physical impairments. However, for all of my criticism, there were a few positive changes for fine-motor accessibility that this entry in the Assassin’s Creed series includes, such as eliminating some of the more frustrating story driven activities, like eavesdropping, or chasing down fleeing enemies. To be clear, I am not all of the way through the story, so these still may exist, but I’ve gotten to a point in the game that where even if I can’t progress in the main storyline, there are still dozens of activities that I can enjoy despite my disability.

There’s more good news on the auditory front. As previously mentioned, Ubisoft now in my estimation has the best subtitles in the gaming industry, but they’ve gone even further and added something that I’ve been asking for ever since I started DAGERS. Ambient subtitles. Ambient subtitles are a must for stealth games, since they allow you to judge what is going on around you without having to hear. And while it is disappointing to note that not all of the ambient dialogue is subtitled (guard’s reactions are still mute), the ambient subtitles that Origin’s does provide allows deaf players to see more of the ambient environment on screen, which can allow them to pick up quests, and give them a better sense of the environment within the game.

Perhaps the most astonishing accessibility feature, is the ability to play Assassin’s Creed with Tobii Eye Tracking. To be clear, I’ve never dealt with eye tracking, I don’t know if this is a good implementation of it, but the fact that it even is there, means that Ubisoft is building a framework within which they can start addressing more sever disabilities such as quadriplegia, which leave players completely unable to use their hands. My suspicion is that because of the use of eye tracking to manipulate the camera, this will allow players who have no use of their hands, but can still use other devices such as Sip-N-Puffs and Muscle Switches to play the game. It looks to me like Ubisoft is trying to figure out how to make their design ecosystem accommodate a more expansive range of assistive tech. In fact, Origins predecessor, Assassin’s Creed Syndicate also had this feature, so it stands to reason that the implementation is better than would be expected from a company who is just trying to use this technology for the first time.