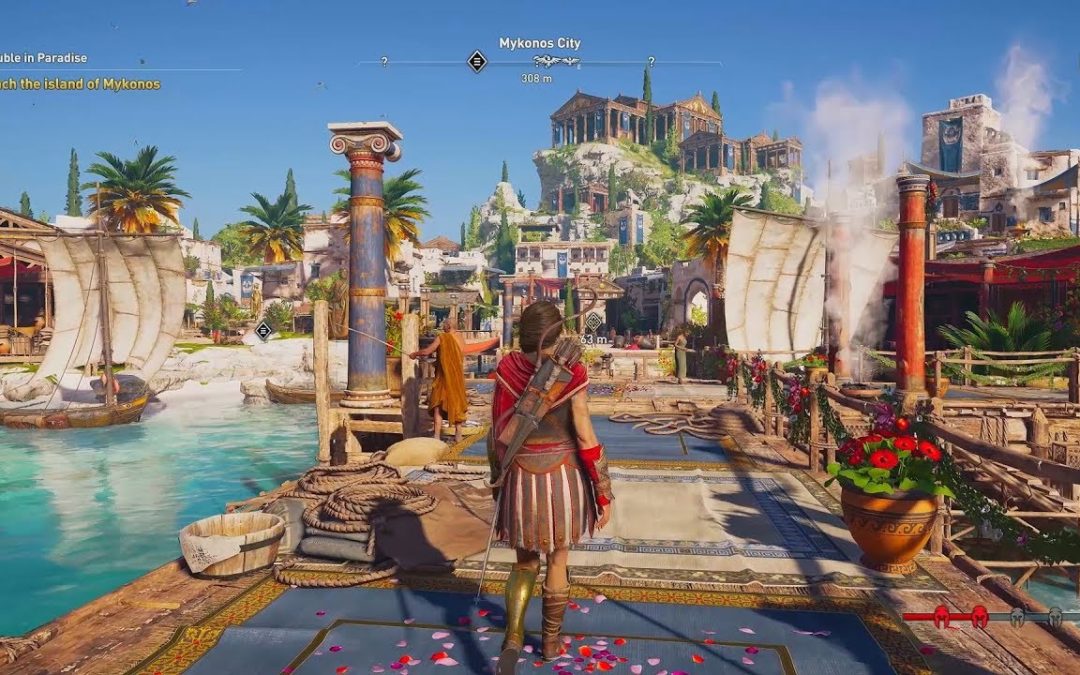 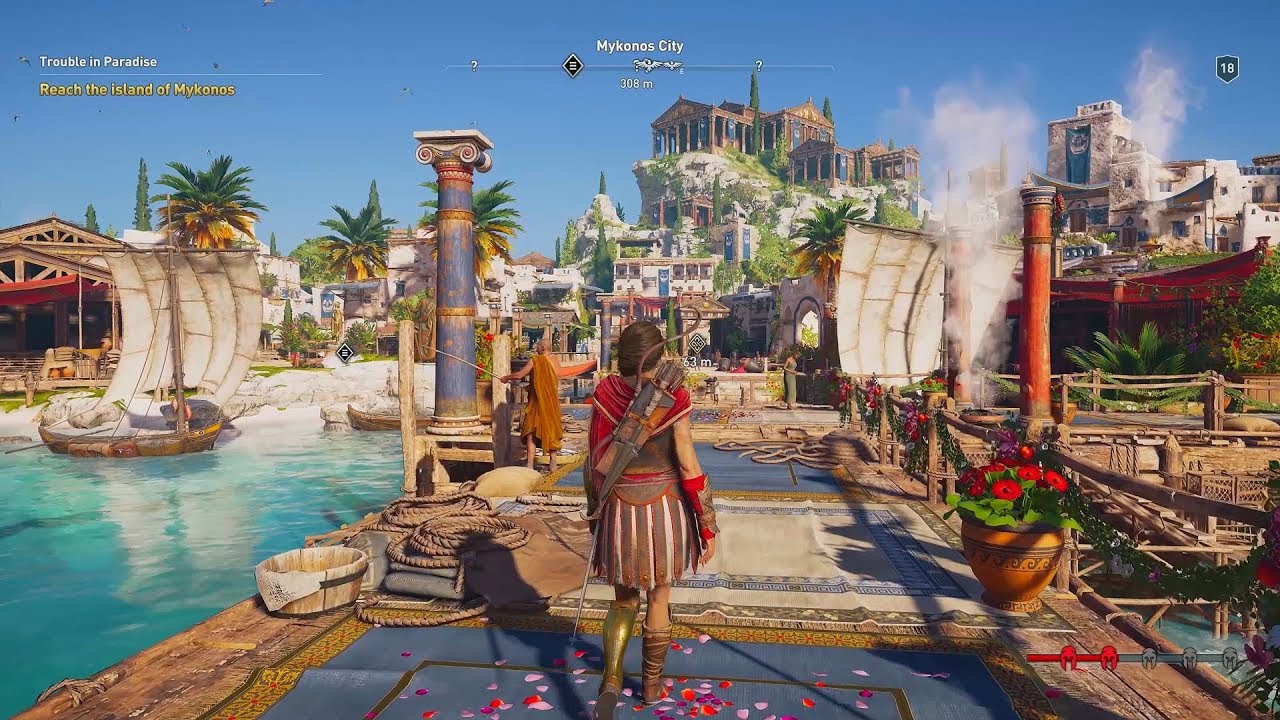 Assassin’s Creed: Odyssey is the latest game in the long-running Action-Adventure Stealth franchise that was reinvigorated with last year’s trend-bucking Assassin’s Creed: Origins. While it is true that the shift to an action RPG structure is a welcome new take, the series still struggles to find its footing with regards to accessibility. The best word I can use to describe the game is inconsistent, for every step the newest installment takes in the right direction, there is another feature that off-sets what it’s trying to achieve. This feeling permeates the entire experience, and the game tries its best to build upon and improve on what was established in Origins, and as a result ends up feeling over-ambitious.

Assassin’s Creed: Odyssey trades the baron deserts and pyramids of ancient Egypt for the sculptures and vineyards of ancient Greece. Set against the backdrop of the Peloponnesian War, the player assumes control of the grandchild of Leonidas of Sparta, whose gender can be elected by the player for the first time in franchise history. Anyone who played the last entry will feel right at home here as the two are virtually identical in terms of combat and traversal. Unfortunately however, it also means that the game is not practical for those with fine-motor disabilities. Despite having played the game on PC, I was excited when I learned that the game natively supports a variety of controllers, which thankfully includes Xbox One, and PS4 and is a nice way to get around the difficult mouse and keyboard default. The game detects whichever controller you plug in automatically so it can be used on the fly. This is where the game begins to show its problems. My controller was accidentally unplugged during play one day, and upon putting it back in, the game was displaying inputs in the settings menu that weren’t actually the inputs that I’d gotten accustomed to. Despite the fact that the game does give you the option to adjust inputs to your liking I was unable to return them to how they were, and the game put a warning up stating that I had chosen conflicting controls because it would set two actions to one button. I have not been able to fix it as of writing this, but thankfully, it happened 15 hours in so I was able to play enough to write this review. As much as I love the new mechanics in the game, they’ll prove the most difficult for those with fine-motor disabilities. Combat here is brutal and unrelenting, requiring near-perfect timing to properly evade blows. In truth it bears an incredible resemblance to the Dark Souls games. It is more forgiving on easy, but even then, it’s no walk in the park. Stealth remains mostly the same as it was, with the most welcome addition being that a fail-state is no longer triggered upon being discovered. While this is meant to encourage freedom in how we play, killing the guard who spots you results in immediately being swarmed even if its done well out of his allies’ range this discourages open combat, robs players of choice, since once you are swarmed, a loss is almost inevitable, and defeats the purpose of no fail-state. Mercenaries are a returning feature from Origins, they are usually 2-3 levels above the player and have a weakness that can be exploited, akin to the orcs in Monolith’s Middle-Earth series. One may have an aversion to fire while another has hatred of poison. It is within the mercenary system and the newly introduced nation power system that the title suffers most. These systems show an over-dependence on grinding, as you cannot progress story without first weakening and ultimately conquering a nation. Conquering a nation seems a bit out of place for Assassin’s Creed and will prove tedious and frustrating for those with motor-function disabilities. This coupled with returning naval combat that requires being too close to enemy ships to be effective and a very selective on-foot aim- assist means that Ubisoft’s latest project is only partially accessible to the motor-function impaired. A crafting system is present but requires a blacksmith, which is understandable, but tedious do to the amount of backtracking required. There never seems to be one close to a fast travel point. These fast-travel points once again require climbing a structure to reveal points of interest, a mechanic I thought was canned, and seems superfluous given you carry an eagle for the same purpose. It was even poked fun at in Far Cry 5.

For the visual perspective, despite the fact that Odyssey is virtually identical to it’s predecessor, it is not quite as visually accessible. While not having a color-blind mode in Origins may have been forgivable due to strides made in other areas, it should have become more of a priority here, and given the accolades the developers received when Origins was more accessible, a color-blind mode should have been a no-brainer. As with the previous game, an eagle is used to highlight points of interest instead of the detective-like eagle vision of yore. While this does prevent colors from bleeding together, it creates other problems in the game’s compass. Once an icon is placed on the compass you are given a number in meters, and an icon to track. The trouble here is that icons blend together at times or are too small and get lost in the screen’s corners. This will cause players to mistakenly head to the incorrect waypoint, and is far more frustrating when the waypoint is under the player or in a cave, as the game doesn’t indicate this properly, or even signify an alternate path. It becomes even more problematic when objectives require that objects be destroyed, only to find that the icon has vanished once the general area is reached, yet no indicator is given to show which objects should be destroyed. As a result Odyssey is only partially accessible to the visually impaired, even though subtitles with great letterbox are available.

The sound design on display here is arguably the best in the franchise. Every surface the player steps on makes a distinct sound, and your horse’s hooves clatter with incredible realism. Ships crashing on open seas and the sounds of sword banging against shield, or blood squelching as you cut down enemies are all memorable. It is puzzling however, that a game that strives so hard to immerse doesn’t offer more robust sound options, that make headphones and the like compatible, especially since headphones would benefit auditory accessibility. Standard fair like master volume and fx volume are available, but they don’t offer much more, and even a choice between mono and stereo is absent. Audio dynamic range can be adjusted with three choices. Offerings here are limited, but the game should still be thoroughly accessible.

` In closing, it is evident that the latest Assassin’s Creed sought to improve by not only adding a nation power mechanic, but also by bringing back what made the fourth iteration so memorable. The trouble is that all of it adds up to an experience that is fun, but is a step backwards with regards to accessibility. It proves that Ubisoft doesn’t quite have accessibility figured out. However it does succeed in making you feel like a Spartan.