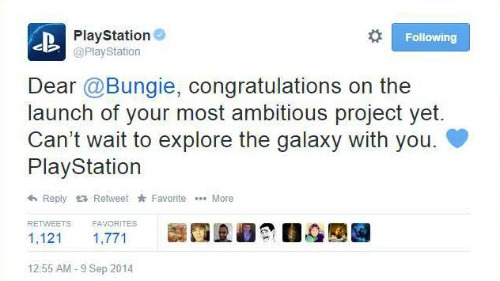 Destiny is now released and with it are a slew of news and updates from cross generation transfers to a day one patch to Playstation exclusives.

Bungie announced that, for a limited time, last generation digital Destiny purchases can be upgraded to the next generation for free. The upgrade applies only to the same console family which allows a Playstation 3 game to be traded into a Playstation 4 copy or an Xbox 360 game becomes an Xbox One edition.

Continuing with the Playstation advertisement campaign that Destiny is “The Ultimate Destiny Experience is Only on Playstation” Playstation celebrated Destiny’s release with a tweet. Playstation tweeted Bungie, “Dear @Bungie, congratulations on the launch of your most ambitious project yet. Can’t wait to explore the galaxy with you. Love Playstation.”

Additionally, on top of the Destiny Playstation 4 bundle that features a Glacier White Playstation 4. A limited edition Glacier White Gold Wireless Stereo headset is now available that includes an exclusive Destiny custom-tuned audio mode. The Destiny audio mode is enabled through the free Headset Companion App and the headset retails for $99.99.

The free cross console generation upgrade of Destiny’s digital content benefits disabled gamers who can switch between the console generations to play with friends. The digital game edition doesn’t require gamers with fine motor disabilities to manipulate a physical game copy either to play the game or to obtain the upgrade.