DAGERS Game of the Year Nominees 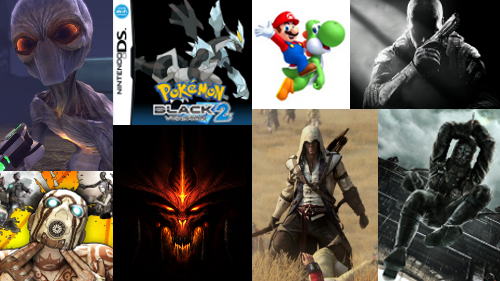 Tis the season where the gaming community comes together and nominates those games which deserve special notice as the best games of the year. DAGERS has chosen to nominate eight games. In order to be nominated these games have satisfied two stringent criteria. First and foremost, they have to be good games. Accessibility means nothing if nobody wants to play a game in the first place. And secondly, true to DAGERS’s purpose, all eight of these games set high standards in the area of game accessibility.

Even though this game came out before our website came online, it still deserves recognition. Diablo III’s simple control scheme means that any disabled player with a PC has a chance to log on and slay monsters with the best of them—even if they only have the use of one hand. And its extensive customization system means that players are able to use tools in the game to compensate for their disability, rather than having to rely on special adaptations to their PC. Beyond this, the overall polish that Blizzard gives this game means that it deserves notice as a very good game, in addition to its high level of accessibility.

2. Borderlands 2
The FPS genre is often plagued by barriers that prevent disabled gamers from enjoying them fully. But Borderlands 2 is a great example of how these barriers can be dealt with, without making the first person shooter genre any less enjoyable. Its four distinct classes and player customization mean that disabled players can build a character that helps compensate for their struggles when gaming. And the sheer number of quests means that even if a player is prevented from doing a particular mission, there will always be some other quest to complete in the wastelands of Pandora.

3. Pokémon Black and White Version 2
This newest entry in the Pokémon series stays faithful to the elements that have made the franchise the most accessible on the planet: simple controls and a simple art style. The turn based style of the gameplay means that players won’t have to compensate for any physical disability. The gameplay is so simple that physical disabilities hardly affect it to begin with. And the art style means that even if a player has a visual or auditory disability, it is still very easy to tell what is going on at all times.

4. Dishonored
This new IP from Bethesda Softworks should be on every disabled gamer’s must play list. It features a story that will pull even the most jaded gamers in, with its wonderfully executed art direction and relatable cast of characters. But where this game really shines is in the sheer amount of choice it gives players. Everything from the path you take through the world, to the way in which you execute your contracts, and even the ultimate fate of the game’s villains is up to the player. Because of this amount of choice, Dishonored gives disabled players a chance to enjoy the game, no matter how their disability affects their gameplay.

5. XCOM: Enemy Unknown
2012 saw the reboot of one of the most beloved strategy games in gaming history. XCOM: Enemy Unknown exemplifies what it means to be a great strategy game, giving players ultimate control, but also making them feel the impact of their choices. But the truly remarkable thing about this game is that disabled gamers can play it and be on a perfectly equal footing with able-bodied gamers. Many games are accessible because disabled players can make do and still enjoy the game. XCOM: Enemy Unknown, however, is different, because anything an able-bodied player can do, a disabled player can do just as easily.

7. Call of Duty: Black Ops II
Call of Duty: Black Ops II earned a barrier free rating because of its extremely forgiving gameplay, and the ability to customize a player’s weapon loadouts before they enter a mission. These two aspects ensure that this game is a perfect example of a first person shooter that is accessible for those with physical disabilities. But in addition to all this, Black Ops II is a genuinely good game. Whether it’s hunting down Menendez in 1980s Panama or securing the U.S.S. Obama from terrorists in 2025, Black Ops II gave gamers, disabled and non-disabled, an equal chance at saving the world.

8. New Super Mario Bros. U
The original Mario games were grueling for players with disabilities to try and complete. New Super Mario Bros. U, however, departs from that tradition and creates a platformer that anybody can enjoy. The overabundance of coins means that even players who die a lot will accrue lives quickly. And the ability to carry power ups between stages gives disabled players an edge, allowing them to go into each level a little better prepared than they were in traditional Mario games. But again, even though this game had a few areas where it struggled, it deserves notice primarily for its multiplayer. In the past, whenever a disabled player would engage in team based multiplayer, they would always run the risk of weighing their team down because they could not contribute at the same level as able-bodied players. New Super Mario Bros. U masterfully avoids this pitfall, however, and uses the Wii U’s Gamepad to give disabled players a way to participate in team based gameplay on an equal footing with everyone else.