CronusMAX First Accessory For Xbox One And Playstation 4 Controllers 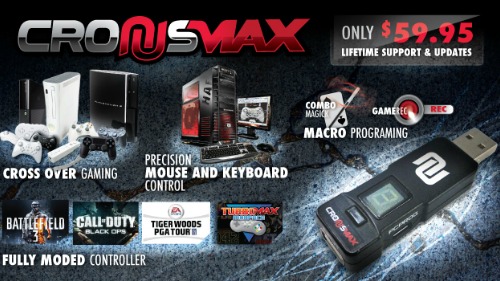 CronusMAX, a video game controller accessory, is updated to now provide Xbox One and Playstation 4 support for players looking to use their preferred controller with their new console.

As reported by Game Informer here, Team Xecuter created the CronusMAX in order to allow gamers with extensively modded Xbox 360 controllers or who preferred a keyboard and mouse controller the ability to use their favored controller with their next generation console.

Disabled gamers expected a delay in accessible features for the next generation video game consoles. Most accessible features for controllers require third party products that can only be developed after the release of the new consoles. CronusMAX is billed as the world’s first controller add on for the Xbox One and the Playstation 4. The device is an accessory, not a mod, thus allowing the USB dongle to mimic the Xbox One controller with software that does not require a download onto the console in order to allow the player to use their controller of choice. As an accessory, use of the CronusMAX does not void the console’s warranty.

The CronusMAX is on sale for $59.95, and disabled gamers interested in the product can check out the CronusMAX website here.