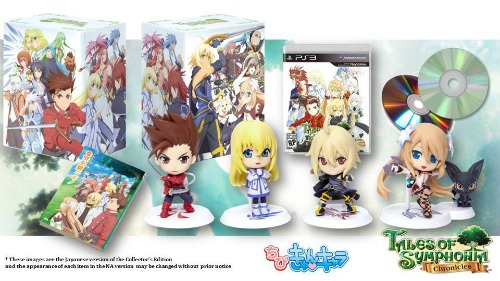 NAMCO BANDAI Games America Inc. announced that a collector’s edition of Tales Of Symphonia Chronicles will be available when the game releases on the Playstation 3 in 2014.

Chris Gilbert, Sr. Vice President of Sales and Marketing for NAMCO BANDAI Games America Inc. remarked, “We are happy to be bringing Tales Of Symphonia Chronicles to North American fans in 2014 with a feature-packed Collector’s Edition.”

Tales Of Symphonia features direct control of the character for real-time but tactical battles. The game follows Lloyd who is caught between the needs of two worlds, including his own, who depend on the restoration of mana, a source of energy, for survival. Tales Of Symphonia: Dawn Of The New World evolves the battle system by introducing a monster recruitment feature and included over 200 unique monsters available for recruitment and battle training. Players control their roster of party members and monster allies for a variety of tactical combinations in battle. The game continues the story with a new protagonist, Emil Castagnier, delving into the consequences of Lloyd’s decisions in the previous game.

This collector’s edition bundles together two games and includes a wealth of physical items. The additional content does not impact accessibility but caters to all gamers interested in the physical items featuring figurines, a book, and a soundtrack. Additionally, the party based fighting style that allows for a variety of combat strategies is suggestive of accessible combat that allows disabled gamers to craft a combat style that compliments, rather than working against, their disability related needs.

Additionally, note that the recently released English trailer for Tales Of Symphonia Chronicles includes English subtitles over the Japanese voice acting when showing gameplay and English text for the trailer’s announcements. The subtitles are a welcome and rare inclusion for a video game trailer.