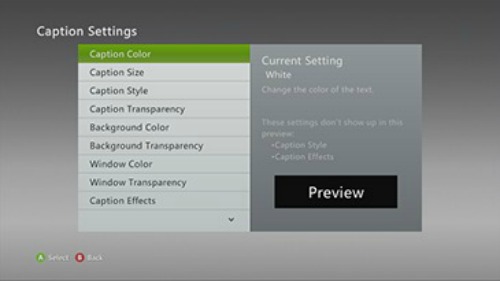 The Telecommunications Act of 1996 required closed captioning on television programming but commercials that are less than five minutes are not required to include closed captions. While some businesses voluntarily include close captions in their commercials in order to reach a larger audience these business have not traditionally included video game companies. Additionally, I was confused because I was positive that the Forza Motorsport 5 themed Xbox One commercial that I previously saw on television did not include closed captions and I was unsure of the reason for the disparity between the two.

Internet searching yielded no answers regarding closed captioning for the Xbox One commercials but my searches revealed that a previous Xbox 360 update enabled closed captioning on media programming on the Xbox 360. The addition of the closed captions is a result of the Twenty-First Century Communications and Video Accessibility Act of 2010 (CVAA). CVAA essentially continues the requirements the Telecommunications Act of 1996 by requiring that content captioned on the television as per compliance with the law must also be captioned on most internet based devices. Previously, content available on television was not captioned when viewed through apps such as Hulu Plus and Amazon Instant Video or even captioned on the content creator’s website such as Marlee Matlin, the famous deaf actress, who was unable to watch herself on Dancing With The Stars when viewing the show on ABC’s website.

CVAA’s timeline required that pre-recorded, captioned television content must be provided with captions on media devices by September 30, 2012 for all programming broadcast on or after September 30, 2013. As of March 30, 2013 live and near-live television programming must be captioned on media devices if shown on television with captions. Other deadlines address edited and archived content. The closed captioning is provided by the media company responsible for the broadcast but enabling closed captioning on the Xbox 360 is similar to closed captions modes on televisions and cable boxes.

Previously, with each app release my excitement was dashed when I initially played Netflix, HBO GO, Amazon Instant Video, and Hulu Plus because no closed captioning was available. Eventually, I stopped trying and ignored new apps. This past summer, I considered buying the collector’s edition of Madden 25 if only for the NFL ticket. Upon learning that for those without Direct TV, the ticket provided internet based game viewing I again gave up on the promotion unaware of CVAA’s closed caption requirement for live television. Now, Xbox 360’s ESPN app allows me to play the available live NFL games with closed captions included.

While grateful for CVAA, internet based video content will not receive closed captions because that content is not regulated. Additionally, Xbox Video has been available since 2006. As of 2012, content that was close captioned on the television was largely unavailable through the digital market for six years. Accessibility often takes time.

However, in conjunction with the implementation of CVAA Microsoft published a surprisingly in-depth webpage addressing disability accessibility for the Xbox 360 and specifically for the Kinect. The page ranges from discussing wheelchair users’ and amputees’ use of the Kinect to whether the Kinect recognizes sign language (it does not). Additionally, the webpage provides the contact information for Microsoft’s Chief Accessibility Officer in order to raise individual disability related concerns.  You can view the webpage here.

With closed captions, basic access is now provided for the all-in-one media device. The closed caption feature will carry over onto the Xbox One, as required by law, but Microsoft’s commitment to addressing disability related concerns will hopefully allow for an ongoing dialogue that propels accessible features forward. After all, we disabled gamers want to spend our money on the new consoles, we simply need to know that the hundreds of dollar purchase works for us.