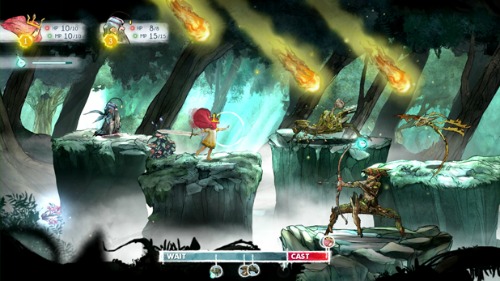 The story is the quest of Aurora, a young girl far from home, and her firefly companion Igniculus who must rescue the sun, the moon, and the stars from the Queen of the Night. The entire story is expressed in rhyming verse and the gameplay includes a deep customization and crafting system. The game is playable both as a solo and a co-op experience.

The game’s release comes at an opportune time. Not too many game release dates are officially announced for 2014 yet and new generation console owners are looking for more games to play. Child of Light’s cross generation release gives all gamers a relatively soon set date for a new game.

For deaf and hard of hearing gamers, the game’s trailer includes no spoken dialogue that requires closed captions. All of the information is presented in text that is incorporated into the trailer itself for promoting the game’s features such as “classic RPG turn-based combat” and “600+ crafting combinations.”

The turn based combat shown in the trailer that incorporated real time combat with a bottom bar that designated each character into “wait” or “cast” no longer moves continuously. Instead, each character’s position on the bar changes with each turn. The visual depiction of characters’ combat status makes turn-based combat even more accessible by clearly identifying characters’ combat status onscreen. DAGERS previous coverage of the game is available here.